There’s a street here called Guadalupe Andador. That’s the street with all the bars and restaurants and where you usually can find expats hanging out at the wine bar called La Viña de Bacco. Great bar. They give you tapas with every every order, and a glass of their house red costs $18 pesos! If we go there, we end up staying too long and eating far too much tapas and drinking far, far too much wine. There’s been a few nights where we were there so long, we forgot about dinner altogether. (It is also the scene of my one night of gastrointestinal horror… not due to their tapas, but due to a waitress giving us a free shot of tequila as we walked out the door. BIG mistake on my part.)

Anyway, if you take that street all the way down, you end up at the foot of a staircase that leads to a church called, naturally enough, The Guadalupe Church.

The view is pretty good, 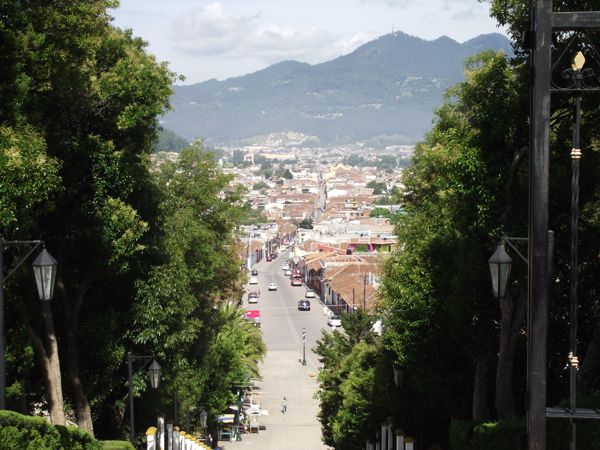 but when we looked into the church, we saw, of all things, neon lights behind the altar! 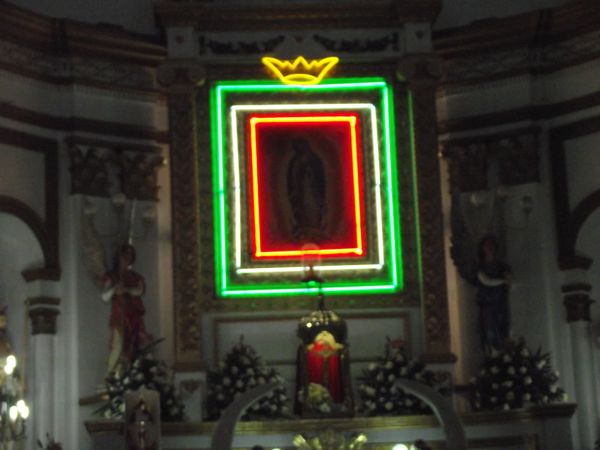 Who would think to do that? Not only the neon lights — with a little gold crown on top no less — but Jesus isn’t even center stage. It’s Mary. Jesus is under her in itty bitty little thing, see? But Mary? She gets center stage. I think that’s cool.

Anyway, we thought nothing could beat that. I mean, neon in a church? What’s next? Mariachis? Oh, wait, we’ve seen that.

Whatever. Then we walked around the church and there really wasn’t a lot to see, until we heard the unmistakable sound of indigenous chanting and when we looked into a back room of the church, we saw a lot of candles, some soda pop and a couple of burlap bags that wiggled because they had a chicken in them. It was a wee bit of Chamula, right here in San Cristóbal.

I tried to take a picture, but it didn’t work so well:

We had to wait for the ceremony to be over. We watched as they chanted, bowed, choked a chicken or two (not a euphemism) and then they did shots of rum. Everybody was drinking rum, even the little kids. In Chamula, they use Pox, which, to me, tastes a lot like bad grappa.

We had heard that there were Chamulans living in the hills surrounding San Cristóbal, but I thought they had been banished from Chumula for being protestants. Maybe these were just regular Chamulans who live here. I really don’t know and I’m far to lazy to do the research necessary to find out.

After the ceremony, Huppy was able to take a few pictures of the space. 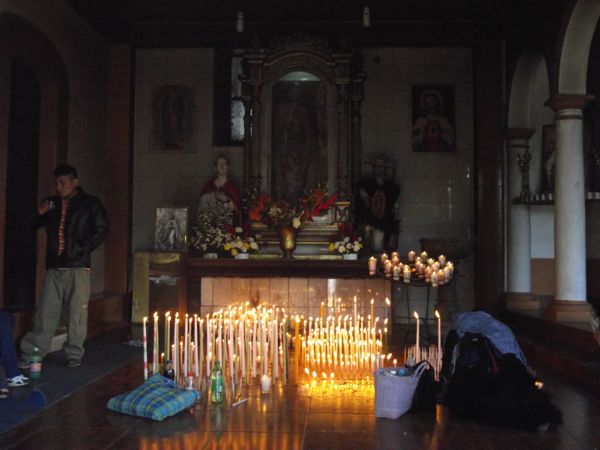 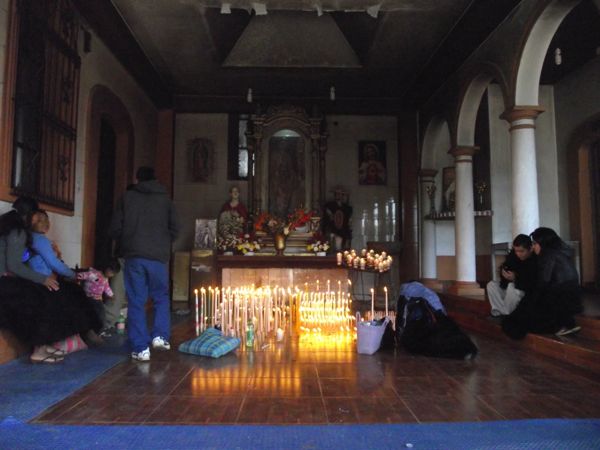