The most useless things we packed:  Linen skirt, summer print skirt with matching top, too many books to read, Bolognese recipe, drain plug (for some reason, the Lonely Planet book recommended a universal drain plug so I packed one.)

We were walking to the mercado for lunch and groceries and I stepped off the curb all wrong. MAJOR ouchy. Peter had to carry me piggyback most of the way home. I don’t think it’s broken because I can walk on it and it’s not black and blue. Certainly is swollen though even though I iced it for a solid eight hours. (Guess where I got the ice? Chipped it off the cooling coils in the back of the fridge. Hilarious.) What a bother. It had better be mostly healed by next week because that’s when the traveling starts. Maybe I could make it into a funny story, but it just really pisses me off, so no, I won’t.

This week’s adventure in food was guanabanas. (I’m not sure if I’m spelling it right. It might be guanabaña.) It’s a fruit, a really big, green and slightly prickly fruit. It almost looks like a giant India fig. I’ve been eating guanabana ice cream and drinking guanabana fruit drinks since we got here, not knowing what the hell it was. The first time I ordered it was an accident. I thought the waiter said “banana.” From then on, I was hooked because it’s a delicious cross between a kiwi and a less sweet pineapple. I had no idea what they even looked like until the other night, when I was getting ice cream for Peter’s birthday cake, and they had a little picture of the fruit next to the name of the ice cream. Then when I went to the mercado, I found one and bought it. It wasn’t cheap, it was $6, but it was bigger than a football and I love the flavor so I figured it was worth it. 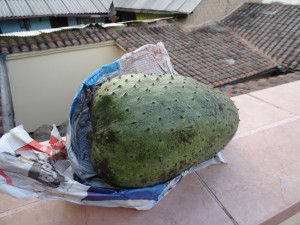 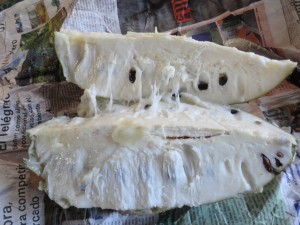 When I bought it, the vendor wrapped only the bottom half of it in newspaper and made sure he placed it in my bag so it remained upright. He seemed very proud of this feat. I do not know why. Maybe it was because the bottom was a little soft and he didn’t want me to spoil my reusable bag.

When I got it home, I cut it in half and it sort of has a core like a pineapple, but it had black seeds like a kiwi, only they were the size of kidney beans. The seeds are throughout the white fruit in what looks like little pods, so you have to squeeze them out of the pods, one at a time. It’s extremely juicy, gooey, messy and time consuming. I imagine something like a ricer might do the job.

The juice sort of has the texture of wallpaper paste only not grainy. I threw the deseeded pulp and juice into a blender and added some water. Delicious. Half of the fruit filled an entire blender. I gave the other half of the guanabana to the neighbor with the talkative 4-year old. She was very appreciative. I managed to say, in poor Spanish, that we were unable to eat the whole thing.

Oh, yeah, the neighbors. They are a young couple with a super chatty 4-year old. The kid will come barreling out of the apartment really early in the morning, yakking about this or that. I obviously don’t always understand her, but she really doesn’t stop. She screams a lot too, as do a lot of little kids. I hear her mom yell back, “Sit down and eat now!” What a fuss she puts up sometimes. They also have this chatty little parakeet in a cage that is always outside our kitchen window. They ignore it a lot, though the little girl will occasionally walk over to it and tell it how pretty she thinks it is. I want to buy the poor bird a little mirror so it feels like it has a companion. They don’t have any toys in there except for the swing the cage came with. I really don’t like to see birds in cages. Never have. This one just seems so lonely and bored.  Last weekend, they put a blanket over it and left it there for like two days. I couldn’t figure out if it was too cold for the bird or they had covered it to help it sleep and just forgot to uncover it. It made me crazy to look at it.

Another thing that makes me crazy to look at is a big truck hauling propane gas cans that aren’t tied down very well. One guy was in the back of the truck, being jostled along with the tanks and the driver had a three- or four-year old kid crawling around in the cab next to him. And the guy was driving like an idiot, stopping and starting, lurching, nearly running into a pedestrian on the sidewalk (me). It occurred to me that one bad bump and it would be one helluva big explosion.

Transportation for these folks is very different than it is for us in the States. In the States, the kids are in special car seats until they’re old enough to start dating. Trucks hauling dangerous items have all sorts of permitting requirements, tie down requirements, driver requirement, etc. and so forth. Motorcycles are for absolutely no more than two people. Cabs can’t have more than four passengers. Busses can only pick up or drop off at designated stops. While I think a lot of the regulations are overkill, some of it serves a purpose and I am used to seeing it. Here, I saw a cop on his motorcycle with his helmetless kid riding on the gas tank! It’s not unusual to see entire families on a motorcycle. Sometimes the kids are on the gas tank, other times they’re squished between their parents, once I saw a kid hanging on for dear life on the luggage rack. The other day, Peter saw a cop wave down a motorcycle and he thought, “I’m finally going to see someone get a ticket.” But no, the cop just hopped onto the back of the bike and motioned the driver to go. (Come to think of it, I haven’t seen anybody pulled over for anything here. The cops I see are usually just standing around talking to each other.) Trucks do whatever they want. Busses can pick up or drop off wherever. Hell, they don’t even have to entirely stop to let someone off. I’ve seen people nonchalantly jump out of a moving bus. Cabs can take as many passengers as will fit in their cars. One time, I counted six people in one cab. And all the trollibusses are always packed to the gills. The doors on most of them slide in and to the side so what happens is the folks standing near the doors have to contort themselves and move very quickly to get out of the way of the opening doors. Otherwise, the doors will just push them out of the way or pinch them bad between the door and the handrail. Oh, and the automobile drivers honk all the time. I couldn’t figure out why at first. It’s not like a “get the hell out of my way you moron” honk that you get in the states. It’s more of a “Pardon me, I’m coming up behind you” or “Excuse me, I’m coming to the intersection” kind of honking. It’s very different, and a little disconcerting. When I first got to South America, I was always assuming I was doing something stupid.

Well, I usually am, like twisting my ankle, but that’s not really a reason to honk at me.

We are now down to our last week in Quito. We leave here right after class on Wednesday of next week. We go first to Baños for a Turkish bath and a massage, then make our way to Peru. Once in Peru, we will fly to Cusco to meet Peter’s friends for what will be the most expensive part of our trip. We need to line up an apartment or something comparable since there will be four of us for nearly three weeks.

In this apartment here in Quito, Señor Freddy finally replaced the old mattress with a firmer one, and it’s definitely better, though, last night, I noticed a moldy smell and thought it was one of the pillows that Peter had grabbed off one of the big chairs in the living room. But, as I was making the bed this morning, and as I was tucking the fitted sheet in back around the mattress, I noticed that the entire top edge of the mattress is moldy! Señor Freddy didn’t buy a new mattress; he either bought or took a used one! OHMYGAWD! After living in New York, especially in recent years with the whole bed bug scare, this used mattress just totally scheeves me. It is a way better mattress than what was there before, but I’m grateful we’re only on it for a week. Additionally, when we get back to St. Louis, we will make a bee-line for the basement with our luggage and we will strip down to our undies before we even step foot into the apartment, just in case we have extra “guests” we don’t know about.

Just because I’m paranoid doesn’t mean the bedbugs aren’t out to get me.

One thought on “A Twisted Ankle”