The other day, I tried to so some cleaning. Just a little, not a lot. I was in for quite a surprise, as my father-in-law can attest to…

So, the landlady keeps a bunch of mops and brooms outside in the little patio area. 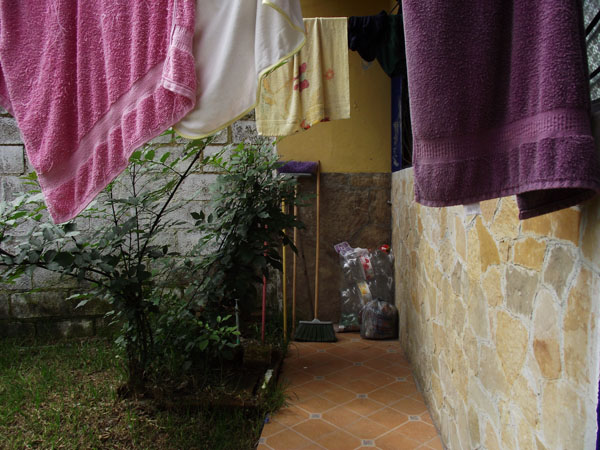 I grabbed a broom and swept the place out. Then I thought, “Hmm, why not get rid of some of that black mold in the bathroom?” So I poured some bleach on the walls and the corners to let it sit for a minute and I went out and grabbed a mop. I didn’t think to look at the mop too closely. I mean, the broom was fine, why wouldn’t the mop be? Right?

At this point, the little shower basin was filled with bleach water and I was just going to dump the mop in there and mop around. As soon as I put the mop in the water however, something terrifying happened. At least 5 bazillion little black bugs each about the size of a pea–they may have been roly polys–came pouring out of the mop!

The mop had become an evil magic wand, touching the ground and spreading pestilence across the land. I shrieked. I tried to mop them all down the drain but more bugs just kept coming off the mop. I started hopping around the tiny bathroom, fearing the critters would climb up my legs, and chanting “ohshit ohshit ohshit ohmygawd ohshit ”

They were everywhere and fast, all trying to make a break for it; climbing up the walls, heading towards the window, the toilet, the door, everywhere. I nearly lost my mind. Pedro comes running in and, with what I’m sure is the most maniacal face possible, I pleaded “Do you see this?! Do you SEE this?!!”

His only reply? “I certainly do.”

I finally managed to get them all down the drain, ran out the door with the offending mop and I haven’t mopped since.

I still have a bad case of the huzz from it. Ewww, shiverrrrr.

On lighter note, though no less gross, I found a wonderful travel story on boingboing.net. It’s a fantastic article about squat toilets. I WISH my posts were half as good, mostly because then I’d be making money from them.

4 thoughts on “The Mop From Hell”