We didn’t make it to the big Mercado. I got sick. I had a good run there though and it wasn’t even a very bad sick; a little cramping, a little fever, a smidgen of nausea, not too bad. If that’s the worst of it, I’ll consider this trip a success, stomach wise anyway. Peter is of course, completely unaffected.

Before I got too bad on Friday night, we went to a little area here in Quito called La Ronda. It’s a little bit like a Bourbon Street and it’s the only part of old town with a nightlife. It’s a narrow street with old buildings on either side of it, lots of little bars and restaurants blaring music out onto the street. Latin Americans loves they music loud loud loud. And all up and down the street are vendors, some legit, others not so much, serving their local drink, Canelazo. Basically, it’s a big pot full of fruit juice, traditionally lemon, sugar and cinnamon, over a huge flame. They scoop some of that out into a cup, fill the rest of the cup up with rum and charge you 50 cents for the pleasure of drinking it. It’s so sweet though that I can only drink one or two of the things. They’ll also have different flavors like strawberry and orange, if you prefer your poison that way. 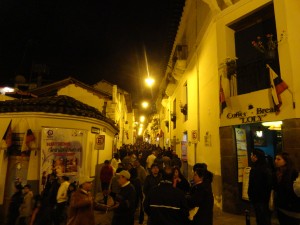 As near as we can figure, and there’s a very good chance I’m getting a few details incorrect, anybody and his brother can brew up a pot of this stuff and sell it on the street, no permits required. There was some sort of awful concert thing—complete with jiggly and scantily clad girls—going on in a Plaza San Francisco near La Ronda and all the streets leading to La Ronda had people selling the stuff. One small block had nine different ‘vendors’ (and I use quotes because most of the vendors looked like somebody’s gramma.) However, what they do need permits for is to sell beer. It seems as if they don’t need a permit to sell beer to you as long as you’re eating food as well. But just walk into a place and buy a beer? No, uh-uh, not without the proper paper work. The night we were there, the police and military shut down tons of places. All of a sudden, they decided to crack down on the ‘illicit beer selling’ which I’m sure had been going on for ages. I’m sure it’s a gamble everybody takes; sell the beer, risk the shut down. But the whole thing was sort of surreal. As an American, seeing the military being used in civilian law enforcement is very disconcerting. There were 20 to 30 soldiers with automatic rifles, about 10-20 police and 5-10 commissioner types overseeing the whole thing. Most of the locals were pretty frustrated and confused, as were we. They really sucked the red out of the lollipop. There was no place left to go, so we went home.

As we were walking home, there was this little girl, she couldn’t have been more than eight- or nine-years old, selling cigarettes and candy on the street at about 12:30 at night. And there you have just one of the many weird contradictions you’ll typically see in a developing country. You can’t sell beer without the proper permitting, but you can sell a bath-tubbed hot rum drink, no questions asked. It’s even OK to make and serve aforementioned drink in a very small space with no more than one egress; a huge open flame, a large tank of propane right next to it and only one exit. Also, allowing someone to sell beer to consenting adults is, apparently, way worse than allowing a small little girl to sell cigarettes to strangers on a dark street in the middle of the night all by herself. And don’t even get me started on the really little boys who shine shoes up and down La Ronda at all hours. Every time Peter sees some guy letting some poor seven-year-old boy polish his shoes, it infuriates him. From the Latin American perspective, I’m sure they figure the kid has to make money so letting him work for it isn’t so bad. I dunno, but culturally, for us, it’s hard to handle.

Oh, and the other thing that’s seems to not be illegal here is peeing in the street. I’m assuming it’s a guy thing, but it seems like every one of them pees on the street. Especially when there’s a lot of drinking of the Canelazo. Walking down the street, you have to constantly avoid the pee streams. It’s worse than New Orleans during Mardi Gras.

Saturday during the day, I sort of stumbled around a Mercado with Peter, watching him eat some pork thing. 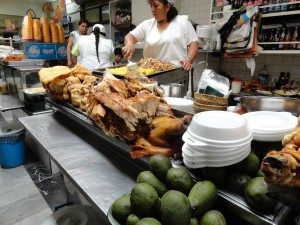 The food court part of the Mercado (they all have one) had about five or six different vendors, each with their own whole roasted pig. All the bits and pieces are for sale. Had my stomach been doing better, I’d have chowed down on some of that crispy skin, yummmm.  (I know. I always feel awful about eating it. Pigs are kind of smart. But damn, they’re tasty.) That night, I wasn’t feeling up to much, so Peter tried to find some sort of a nightlife in Gringolandia, the part of town with all the expats and folks from all over. He came back earlier than he’s ever come home after a night out, grousing about how all of Quito shuts down and nobody hangs out in bars. I think he also noticed that the altitude makes less beer more effective. He was rubbing his head the next morning. He never does that after a night out.

Sunday, feeling much better, I decided a pot of chicken soup was in order. So we went down to our local Mercado and got what we needed; carrots, cabbage, garlic, onions, spinach, a hot pepper and corn. (The women who run the booths sit there all day and remove the kernels off cob after cob of corn; a sort of Zen practice.) Before we went to get the chicken though, I again watched Peter ingest something that would’ve sent me to the emergency room. He drank one of their fruit juice concoctions that are delicious, but are made with questionable ice and the glasses are barely washed out with the local water. (He was, of course, unaffected. Seriously, when I pass from this life, me and my maker are going to have a little sit-down and discuss this retched body she gave me.) After that, we went downstairs to buy our chicken and well, it was freaky. First, they had a bunch of skinned chickens, half emptied of their insides, with their feet sticking ignominiously up in the air. Also, oddly, in many of them, there were one or two egg yolks on top of the partial insides. So, when you looked at them, it was like a gynecological nightmare. 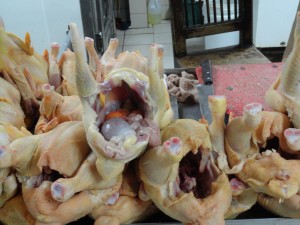 We weren’t sure what we were doing, but we ordered “un pequeño pollo, muy limpio.” Thankfully, they went into what appeared to be a refrigeration unit, pulled out a cleaned bird, hacked off the buttocks part, showed it to us and then wrapped it up. Shockingly, they did this with their bare hands. THAT was weird. In the US, we’re taught that dead chickens are the next best thing to the bubonic plague. Here in Ecuador and probably the rest of the developing world, not so much.

The soup turned out great if a little funny looking. I had grabbed a head of purple cabbage so that and the spinach made the water sort of grayish. And yes, I boiled the hell out of that chicken.

Sunday is a very lazy day here in Quito. They close down some of the major streets in Old Town and let the bicycles have at them. Folks are out just strolling around, and this time of year, the weather is always perfect. It’s their dry season so every day is sunny, ~68°F, with blue skies and fluffy white clouds.  It’s a really tough slog.

Off to Spanish class! 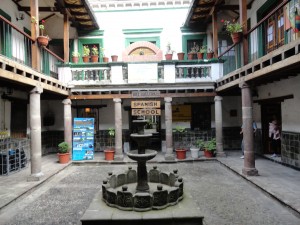