Not much interesting happened because we are both miserable studying tenses. We were both feeling so positive about learning Spanish; learning new vocabulary and conjugating verbs and then… duh duh duhnnnnnn… enter the tenses—past tense, future tense past perfect, future perfect, plu-f-ckn perfect. There are 15 of the damn things. Hrmph. There’s a reason I always gave up on learning all the languages I’ve ever studied over the years. The reason can be summed up in one word: tenses. It probably doesn’t help that I’m woefully ignorant of grammar.

So, here are just some random things I’ve noticed:

It sucks here. There’s no jazz or classical whatsoever. You have your choice between Latin American music, Latin American dance music or Latin American ballads. The most tolerable, I think, is the Latin American ballad station. The songs are slow so I can at least hear all the words. Unfortunately, I’ll also hear the word corazon (heart) about a million trillion times. Also, the DJs do this really annoying thing with the volume knob. In the States, they’ll just talk over the beginning or end of a song. In fact, every song that’s played, a post is marked and that’s how long you have to talk before the words start. Here, they don’t give a damn if the song has started, is finished or whatever. They talk over it endlessly and so they can be heard, they’ll turn the volume down on the music, but they won’t keep it down. They’ll turn it down to talk. Whenever they pause for a new sentence or thought, they’ll turn it back up, but only for a New York second. Then back down it goes so they can prattle on about something or other or just laugh like a goofball. So the effect makes it sound like another radio station is bleeding into the station you’re listening too. It’s this intermittent blast of music then talk talk talk, blast, talk, talk, blast, talk, blast, talk, talk. And the good ones are kinda’ smooth about it. But the bad ones, like the guy I’m listening too now, sometimes gets it backwards and blasts the music while he’s talking. It’s so fast, I can see why it would happen, but I can’t understand why they would do such a thing to begin with. Also, sometimes, they have ads for cars and bankcards and the like and at the end, they have that disclaimer/legalese thing. In the states, it’s quick. Here, it sounds like a Cuban on meth. It’s comical. Oh, and they seem to love Julio Iglesias here. Ever since we got here, the guy on the radio says his name like 30 times an hour. He must be performing here soon or something, but they just sound so thrilled when they say his name over and over and over again.

The shows are awful. From the perpetual soap operas to the weird Regis and Kathy Lee type programs to game shows where they compete for boxes of detergent, I can’t wrap my head around any of it. (OK, maybe they’re not really competing for boxes of detergent. I haven’t watched a game show here long enough to figure out what they’re playing for.) Anyway, the funniest thing is that they are constantly mugging for the camera. These beautiful women and these funny looking guys, are all contorting their faces and saying things like “Ah dios mio!” or “Non!!!” or “Si!” I get some of the story lines. One I watched had this older woman whose son had decided to NOT become a priest. She was getting very upset about it, blaming this or that woman for his decision, and just at that moment her statue of the Madonna flew of the credenza. “Ah dios mio!”

There are absolutely no emissions standards on anything. Cars and busses spew black smoke every time they accelerate. And not just the older vehicles, ALL the vehicles do it. I used to complain about smokers. Their smoke smells as fresh as daisies compared to what comes off the street.

According to my teacher, only about 40% of households have a washing machine. The rest do it by hand. And nobody here has a dryer. Maybe only 1% of homes have one of those luxuries and dish washing machines are nonexistent. Most places are set up for hand washing though. It’s a tall sink and on one side, there’s a bin to hold the soapy water and to soak and rinse the clothes. On the other side is a sort of slanted ribbed surface with a pipe with holes that runs along the top of the surface. The water comes out of those holes and you use a bar of laundry soap to scrub and rub on the ribs. Then you rinse and hang. As near as I can tell, that’s how it works. The woman next door does laundry every other day for her whole family. She does a load so quick I can’t imagine it’s all clean. My teacher recently bought herself a washing machine and her mother freaked out. She held up a pair of jeans and cried, “But it’s not clean!” She can’t believe a machine can get anything clean. I can’t believe people wash bedding and jeans by hand. 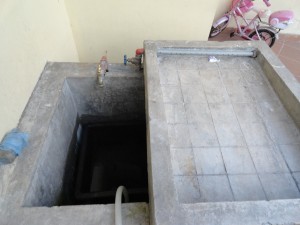 Apartments are cheap cheap cheap here. I’ll describe the one next to us that’s for sale like a real estate person in New York: A sunny one bedroom/one bath, newly renovated with all the appliances, a washer hookup and a shared balcony. It’s the third (top) floor of an historic colonial building.  It’s in an excellent location, close to stores, restaurants and the theater and it’s only a few blocks from the President’s residence! A common party room is available for residents. The building is very secure. Asking price: $30,000 USD.

Things are of course, pretty cheap here in Ecuador. Industrial eggs are anywhere from 10 cents to 20 cents a piece. Farm fresh eggs are 30 cents a piece. Milk is around 80 cents per liter, which is about $3 a gallon. The water is way cheap. A bottle that we buy in the states for a buck is like 30 cents here. The really huge five-liter bottle costs maybe a buck and a quarter. Maybe. As mentioned in a previous missive, the restaurants here have what’s called an amuerzo for lunch or dinner. It’s a set meal that includes a bowl of soup, a plate with rice, some sort of meat and either a plantain or potato and it also comes with whatever fresh juice they have for under $2 per person. A huge empanada, about the size of your head, stuffed with meat, chicken or cheese, costs about 80 cents. Yesterday, I didn’t feel like cooking so we had an amuerzo for $1.75 a piece and for dinner, we split three empanadas, a small bottle of coke and a small bottle of water for $3.75 total. Basically, we ate out for a total of just over $7 for the both of us for the whole day. Not bad. Granted, the food isn’t gourmet, but it’s filling, usually tasty, and sometimes odd, like the chicken feet soup. (Still haunting me, thankyouverymuch.) Oh and a huge bottle of beer, like the size of a Taj Mahal, costs around $3. It’s not good beer. It’s a boring pilsner. But it’s beer and it’s cold. Things that cost about the same, maybe just a wee bit less is decent wine and some food staples like pasta. What usually costs more is anything western like brands for soap*, toothpaste, shampoo, etc.

And did you ever wonder where all those Sacagawea dollar coins went? I found them. They’re all here. Somebody has to explain to me how the hell the Ecuadorian government can get and circulate American dollars. That’s their currency here. It’s the weirdest thing. Did they buy them from the US? They must’ve, but what did they pay for them with? Also, the money that is here is the dregs of the dregs. All those bills the banks pull out of circulation because they’re too old looking must be shipped down here. If anything convinces me that money is an agreed-upon fantasy, it’s the use of the American dollar in Ecuador.

*A note about soap: I’ve had a helluva time finding any soap here that doesn’t stink. I don’t like perfumes or the like in my soap because it makes my skin itch. Most of the soaps here not only smell so strong your eyes water, but most of them also have triclosan. There’s no such thing as hypoallergenic soap. Even the baby soap is polluted.

The mystery of the tampon applicators has been solved!

Ever since we got here, I noticed that there were what looked like two used tampon applicators just laying near the front entrance at night. Assuming they were trash, I walked over them for about a week. Still, nobody fessed up and tossed them into the garbage. Finally, I’d had enough of looking at them so I kicked them out onto the street, just get them out of my sight. The next night, they were back and I was like, “WTF?!” So, I kicked them out again. The next night, sure enough, they were back and I was like, “OMG! WTF?!” It’s bad enough they kept reappearing, but were they different applicators, or the same two? I was so confused. So today, I finally figured it out. Somebody, probably the barber on the first floor, uses them to prop open the front doors during the day and I hadn’t noticed that they were used for that purpose because whoever did it usually hid them pretty good. They probably were getting pissed at having to retrieve them from the street every morning so they made it pretty obvious how they were being used.

While I’m all for repurposing used items, that’s just going too far, even for me. I totally grok repurposing. I come from a long line of repurposers. My grandma was the one who taught me that a pair of old pantyhose makes an excellent rope when you need to tie just a little something up. I, however, draw the line at using plastic tampon applicators as doorstoppers. The next hardware store I see, I’m going to buy two proper doorstoppers… as long as they don’t cost more than a quarter a piece.

Update on the Poopy Basket

Peter stepped up to the plate. That is now HIS chore. He must have a very healthy instinct for self-preservation because I wouldn’t have been very nice about pointing out to him that I was doing every other bloody thing around this place. Of course, he handles it like it’s toxic waste. He wraps the fingers of both hands completely in toilet paper, grabs the liner bag by it’s handles, quickly ties a knot and holds the thing at arm’s length until we get out front where he quickly drops it on top of the other bags. I still can’t get him to deal with the cockroaches though due to some childhood trauma he and all his siblings experienced. That will always be my job.