For the art part, basically, you get in your car (or on your bike) and there’s a 50 mile loop of art on the side of the road. Farmers agree to let the artists do their installations on their land, some farmers even contribute some of their own art, and when combined with the beautiful landscapes and fall colors, well, it’s something special to be sure. A couple of girlfriends (Gail and Mary) and I piled into a car and we joyfully cackled the whole way through it.

The first piece we saw was called “What’s on your plate?” 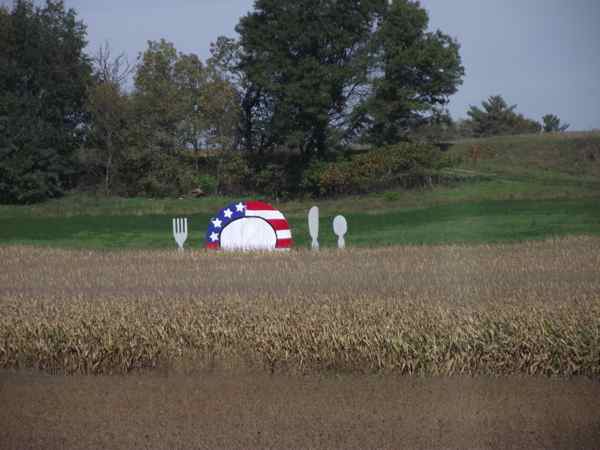 Robin and Jean Craker have been farming since 1980 and purchased Haycreek
Livestock Farms in 1991. This portion of the farm has been in the family
since 1954. Currently, they cash crop and maintain a small beef herd, using
conservation strips and no-till planting.

OK, I thought that was pretty cool. Then, the next one was “Consider This.” 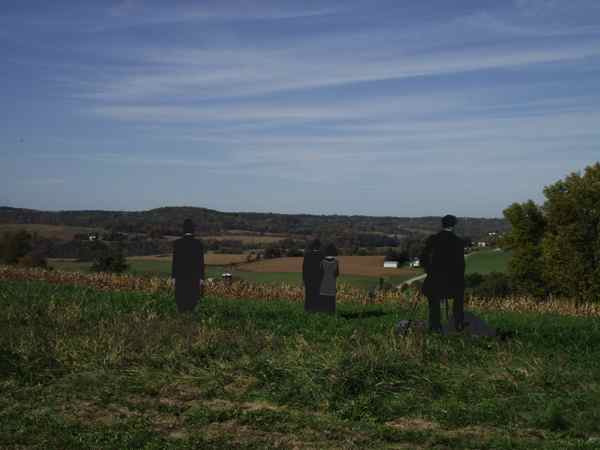 Consider This presents silhouette cutouts of human figures gazing out away from us as they appear to survey the land in front of them. Who are these characters and what do they see? What do you see as you gaze out over the beautiful landscape of rural Sauk County and share the view with a cast of characters, each likely with a distinct perspective? John lives and works in Madison, WI. His art focuses on the human bond to environment and the various and complex
ways we think about, value, and connect to the world we live in.

Then, we saw “Ruminant, (the grand masticator)” 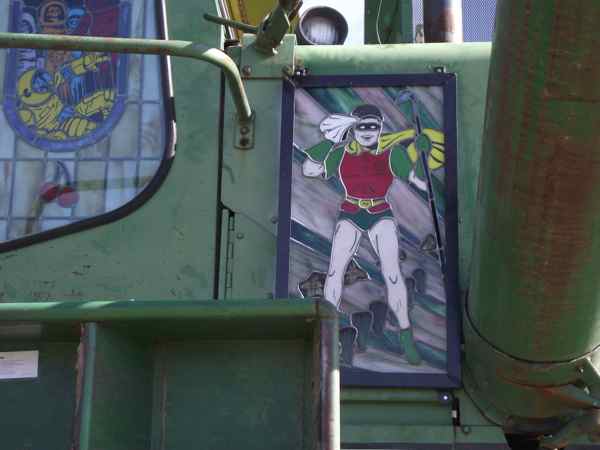 Ruminant (the Grand Masticator) is a stained glass accoutered Combine
that garners historical musings related to “the harvest”. Reverent and
referential, Ruminant acts as a beacon of contemplation that mashes up societal
concepts whilst gnawing at orthodoxy. Karl Unnasch is an Artist who works in
an invigorated 1800s Mercantile in rural Pilot Mound, MN. His interest in the
societal bandwidth he calls “peripheral artistic culture”, or “Hobbyism” plays out
as a creative pursuit that emphasizes the Private as the Shared-Sacred. Combine
provided courtesy of Manthey Salvage, Mauston. 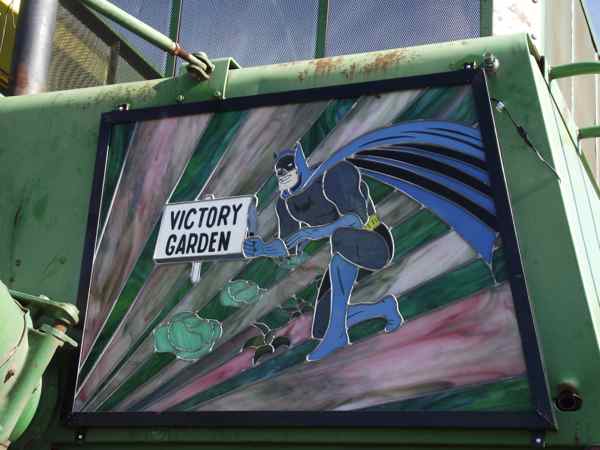 I cannot possibly do Ruminant any justice. This one is hard to show in it’s entirety. It’s cool enough with the stained glass BUT at night, it’s all lit up. I don’t have any shots of that though. I wasn’t expecting to see anything interesting and didn’t have my camera with me the night me and my cousin stopped to see it. Just know that at night, it’s SPECTACULAR.

Then we saw “Plenty”: 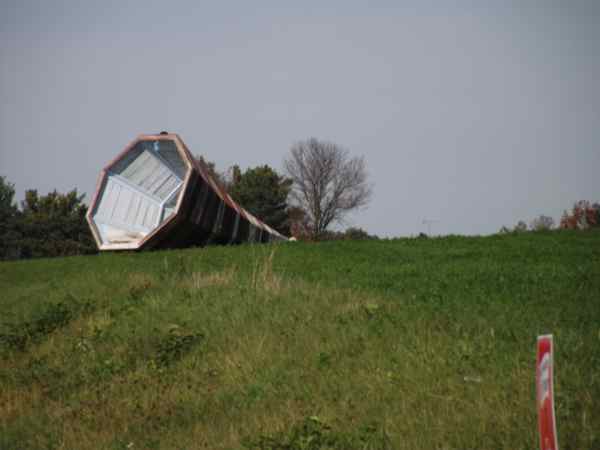 Inspired by the abundance and variety of resources in this area as well as by the
community’s generosity of spirit, this sculpture is meant to express the bounty
of both nature and human nature. Plenty is based on the form of a cornucopia. It
seems like an appropriate image to convey all that is best about the season, the place, the community and the landscape. Gail Simpson, Aristotle Georgiades (www.actualsizeartworks.com), and Katey Smith are artists and residents of Wisconsin.

Ok, that one was only so-so. Still though, a giant cornucopia in the middle of a field, not to uncool.

Then there was this thing sculpted out of hay. HAY! 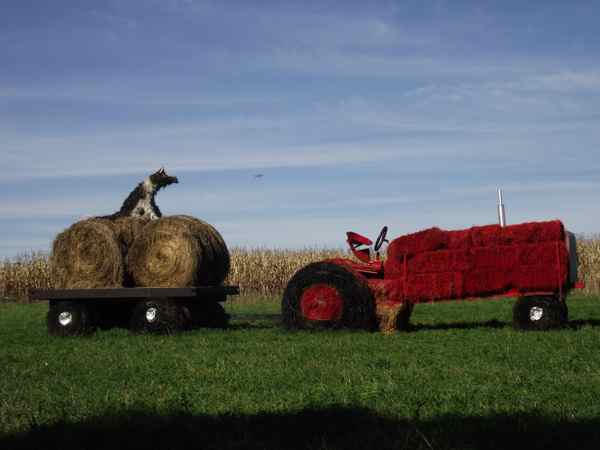 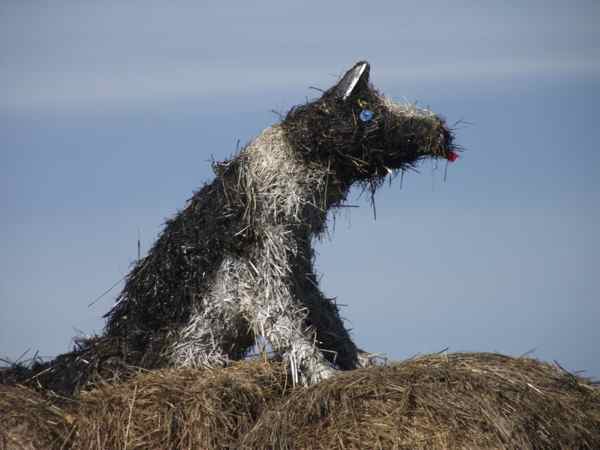 It didn’t have a name. I think one of the farmers did it. How cool is that dog’s red tongue? Also, I was told there’s some sort of, I dunno what to call it, battle? conflict? competition? between red farm equipment and green farm equipment. 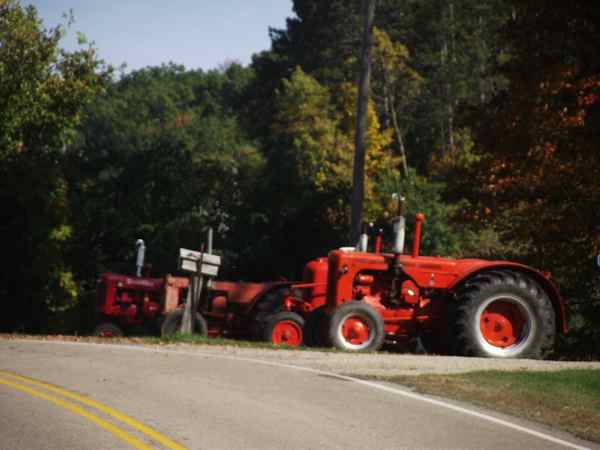 The green stuff is John Deere. The red stuff is International Farm Machines (I think that’s the name. I can’t remember. I’m from Brooklyn for heaven’s sake.) When I asked which was the preferred machine, Gail said “Oh, it depends on the farmer, the time of day, the time of the year, whatever. This is Wisconsin.”

(Oh, and also keep in mind that anything that is spoken is said with a Wisconsin accent. Which is to say, any “O” sound sounds like “Oh” Soh, when it’s cohld in Wisconsin, I’m tohld, the farms are covered in snohw.)

OK, onward we went. The next one was called “Entrenched”: 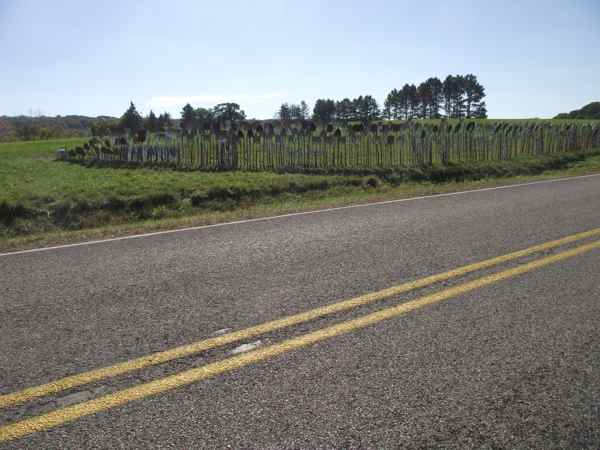 Rita Grendze has lived and made art in Manitoba, Cleveland, Germany, Latvia,
and spent nearly a decade in New York City. She now lives with her husband
and sons in Geneva, IL, which she says is finally HOME. rendze drew inspiration
for Entrenched from the rolling, wave-like hills of the Reedsburg area landscape.
The quantity and variety of shovels used reflect the labor involved in farming and
the attachment farmers have to their land. Grendze hopes the familiarity of found
objects make the artwork accessible to even the most casual passers-by.

All along the way are these beautiful hand-carved signs that describe different things like wood, art, water, and how they fit into farming, landscape, lifestyle and conservation. 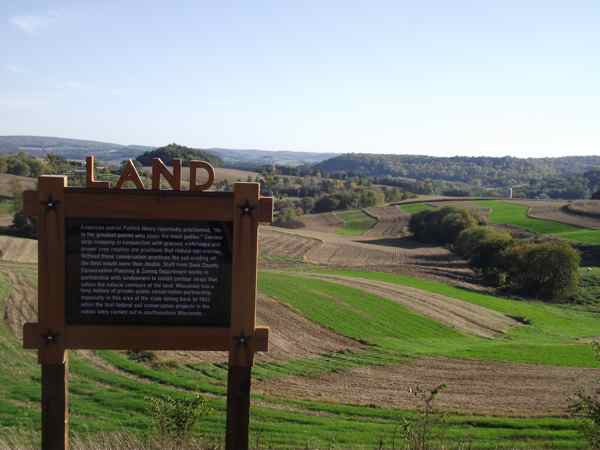 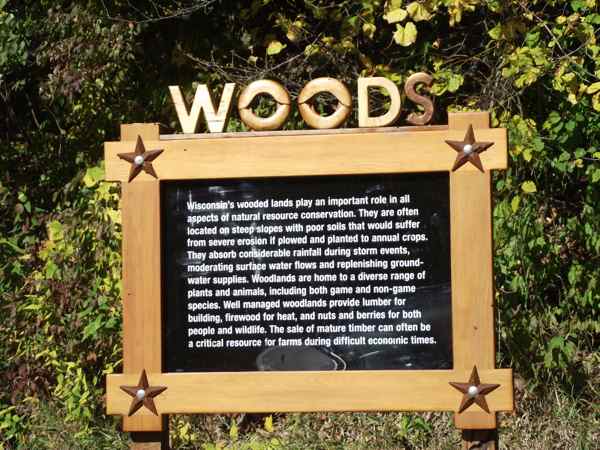 They were all carved by the same guy who built this wonderful wagon: 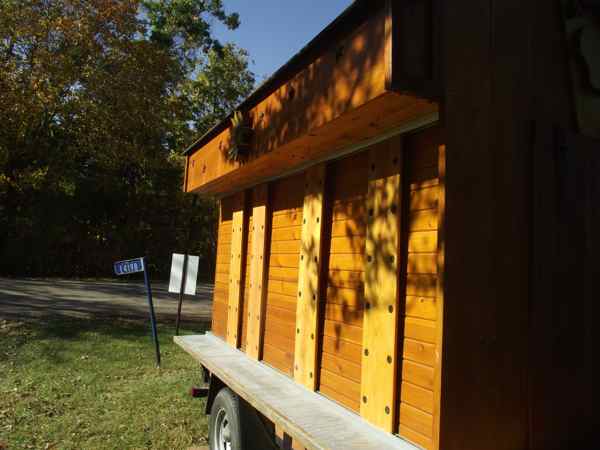 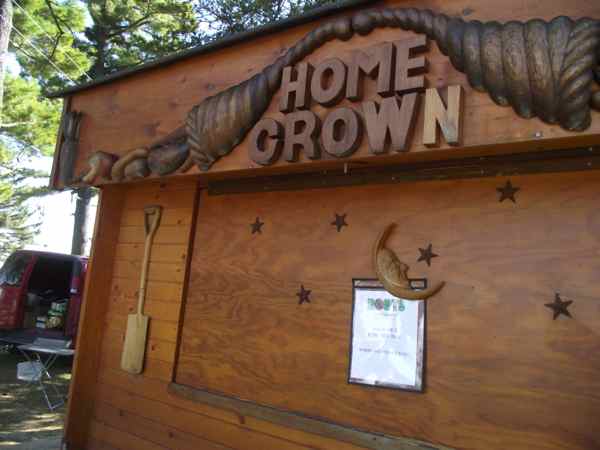 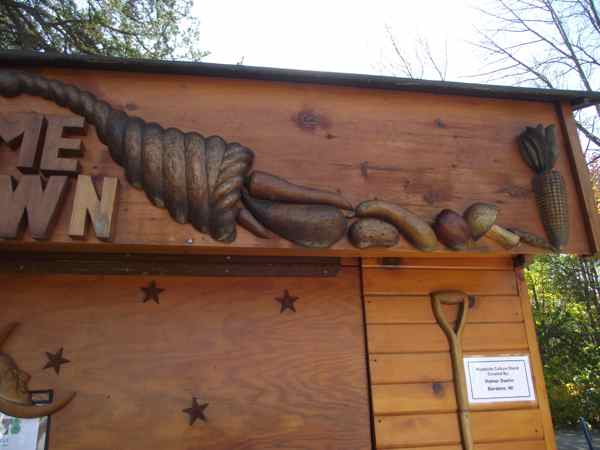 His name is Homer Daehn and he’s also a pretty cool guy. He’s done a lot of work with the Barnum & Bailey museum, restoring some of the old circus wagons. Right next to this wagon was a woman selling beer jelly. Jelly made from beer. I had to buy one of those. I mean, Beer! Jelly!

Then it was off to see another one of those silhouette things: 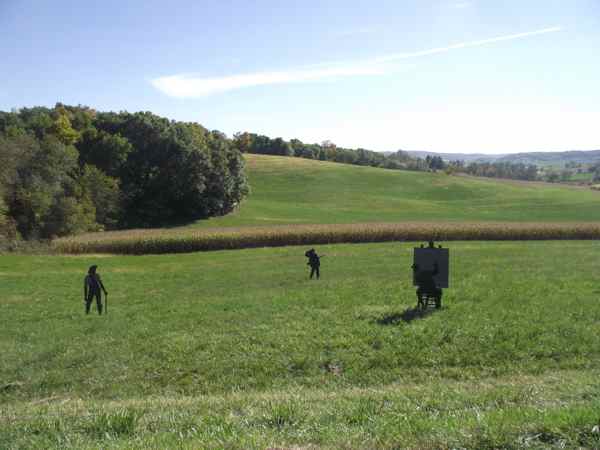 and then there was the red piano called “Pasture Play”. 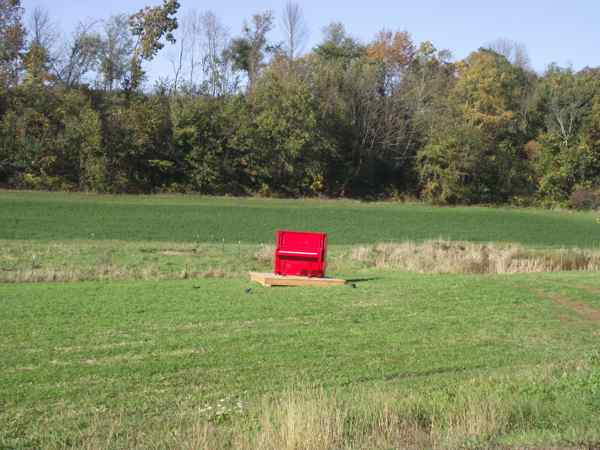 Make music on this vintage piano. Able Trek Tours, based in Reedsburg, provides one & multi-day motor coach tours and charters locally and nationwide as well as fully chaperoned tours for individuals with mild to moderate developmental disabilities.

Who could resist such a thing? I certainly couldn’t. 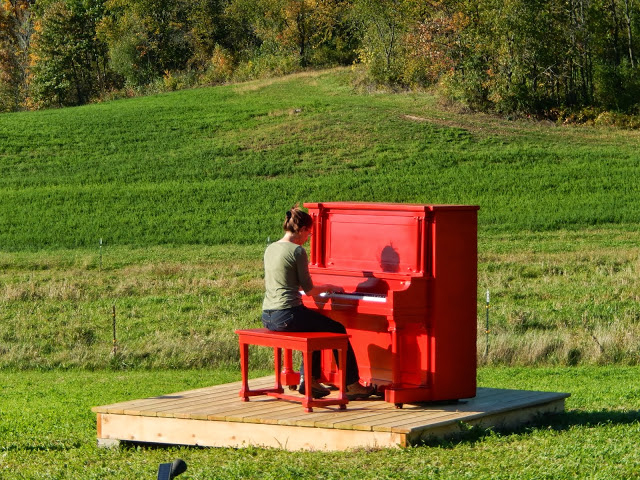 I mean, now I can say I’ve played at least eight bars of the “Moonlight Sonata” on a pasture in Wisconsin! Of course, Gail and Mary talked me into climbing on top of the piano. 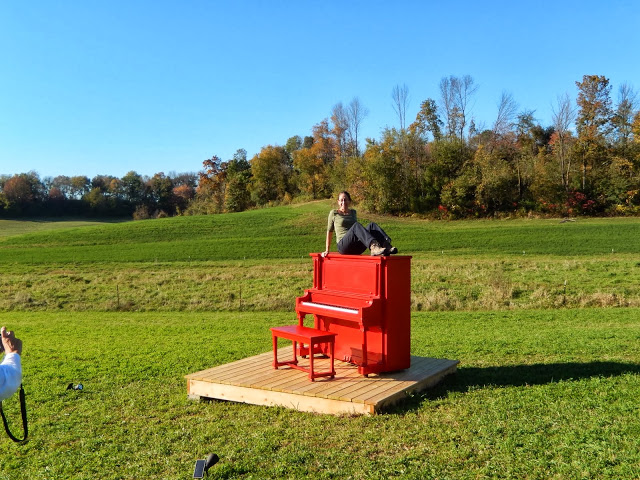 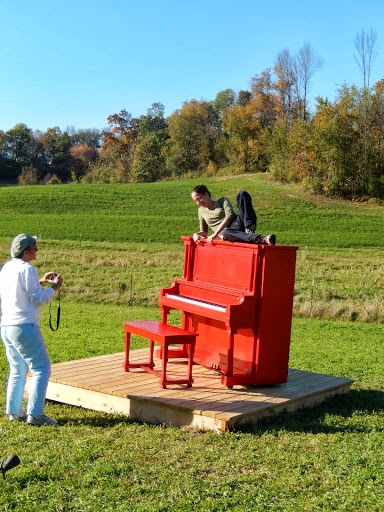 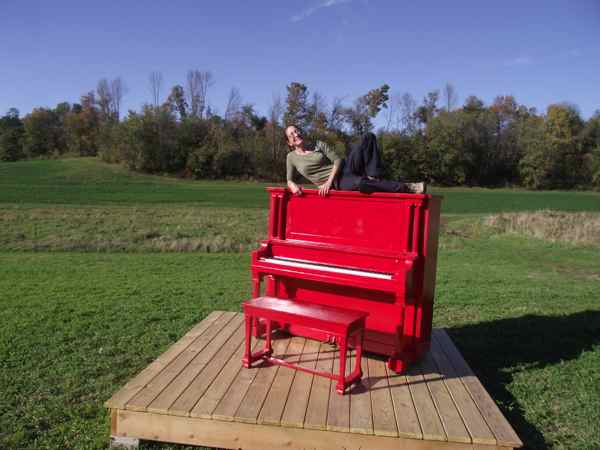 How I let them talk me into such a thing I have no idea. Silliness.

Anyway, then there was “Sound Barrier”: 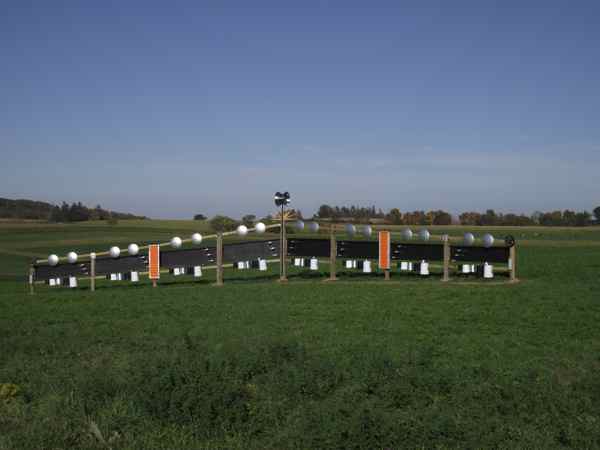 Raised on a dairy farm, Jeremy found his home to be a source of nearly limitless
exploration. With Sound Barrier, Jeremy uses familiar objects in order to create
a large-scale percussion instrument. The core structure (an electric fence)
is typically used as a barrier, placing importance on what lies inside or outside
ensuring their separation. Sound Barrier brings focus to the fence itself, inviting
you and others to approach it – and play! Instead of the boundary, it has become
the destination for musical collaboration and exploration.

You could go and bang on all that stuff to your heart’s content. After the piano though, none of us felt like climbing out the car. Lazy hens. Then there was this hay cover that looked kind of like a train. 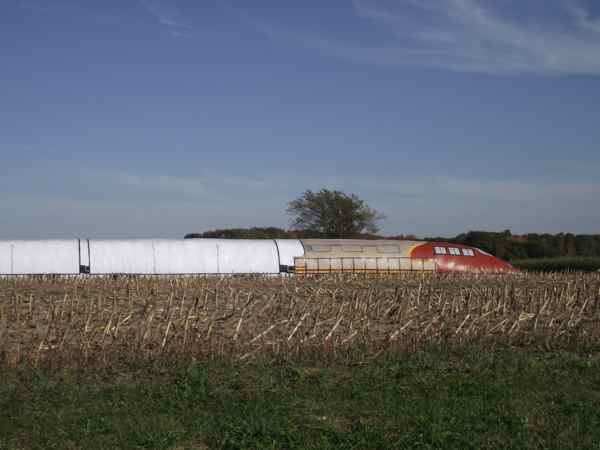 It was unfinished, but still, a very cool thing done by one of the farmers. Then there was “Come Dine with Us” or something like that. 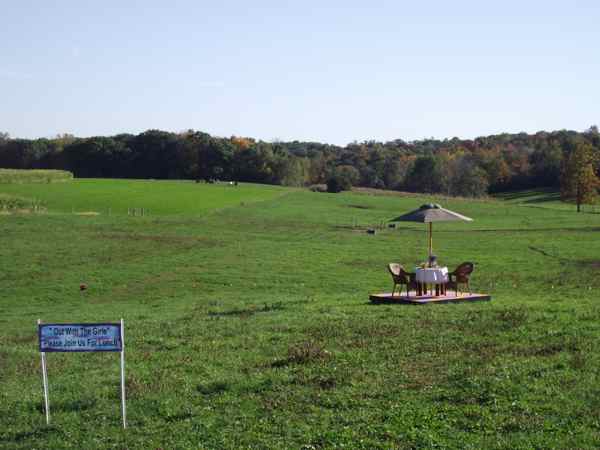 It too was done by one of the farmers. There were cows in the field next to it and I guess the idea is to eat while the cows eat. Another farmer contribution was the hay castle. 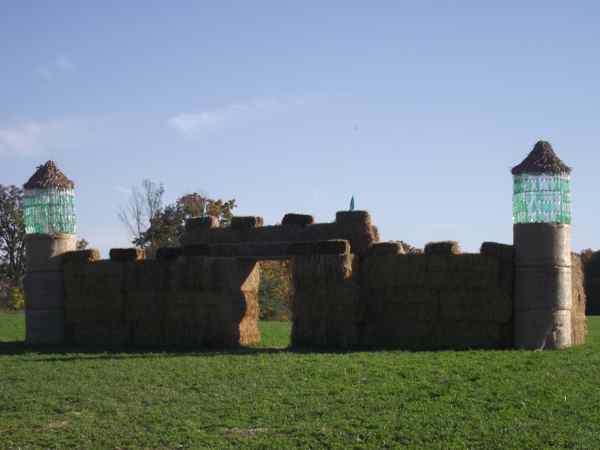 and the last one we saw was called “Serpentine”. 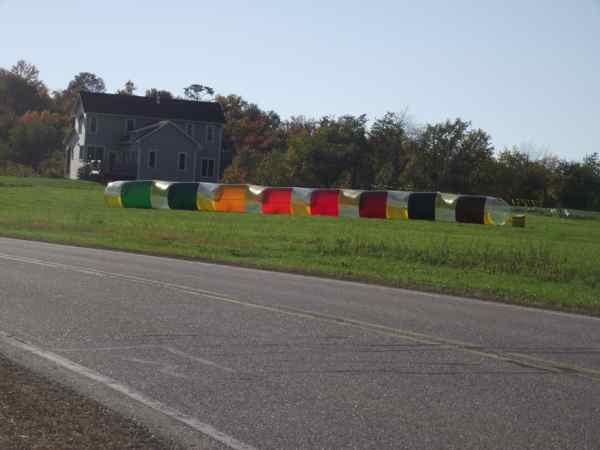 Jesse Lee Wilson lives and works in New York City. His work draws upon his interest in how graphic design and architecture define our daily space. For Wilson, diagrams, structures and objects become vessels through which we confront the cosmos. A Wisconsin native, he is interested in the precious nature of the rural agricultural landscape – the way in which the land seems to teach us something about stewardship rather than short-term commercial gains.
“…under the pavement the soil is dreaming of grass.” – Wendell Berry, “In a Country once Forested”

Which looks different depending on where you’re standing. Of course me telling you that and not showing you that is completely meaningless but I was honestly too lazy to run back and take a shot of it from another angle.

Throughout the whole ride, we were treated to beautiful views like this 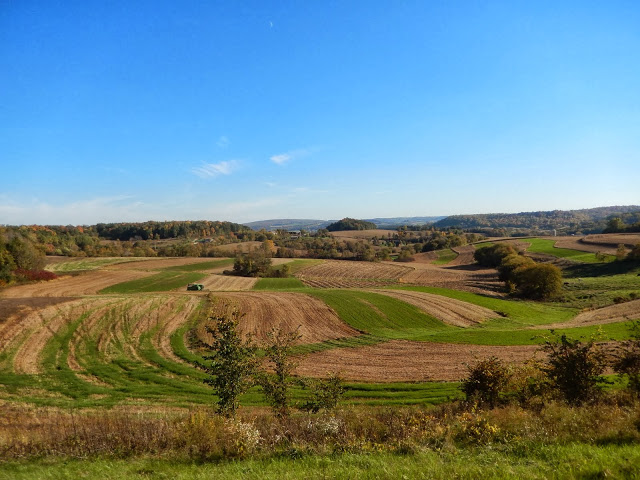 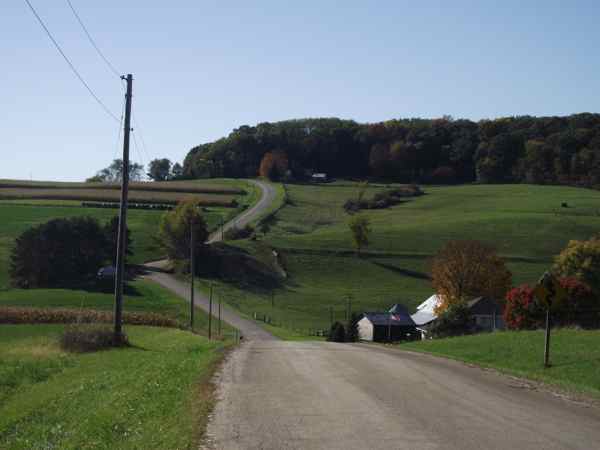 Yeah, Wisconsin is a totally ugly state. Don’t even bother coming here. You just stay where you are, relax, nothing to see here.

We did the tour on a Thursday which means we didn’t see any performances and the food vendors weren’t open. It also means we didn’t have traffic or crowds to deal with. Maybe, if I talk myself into the Kombucha class, I’ll see some of the performances. To be determined.

Any way, next year, if you’re anywhere near this part of Wisconsin during October, it’s totally worth the effort.

Oh, almost completely forgot, there are a lot of Amish farms in the area and while I could’t take any photos of them, we did see the most adorable bunch of kids going home from school on something that looked like this internet picture: 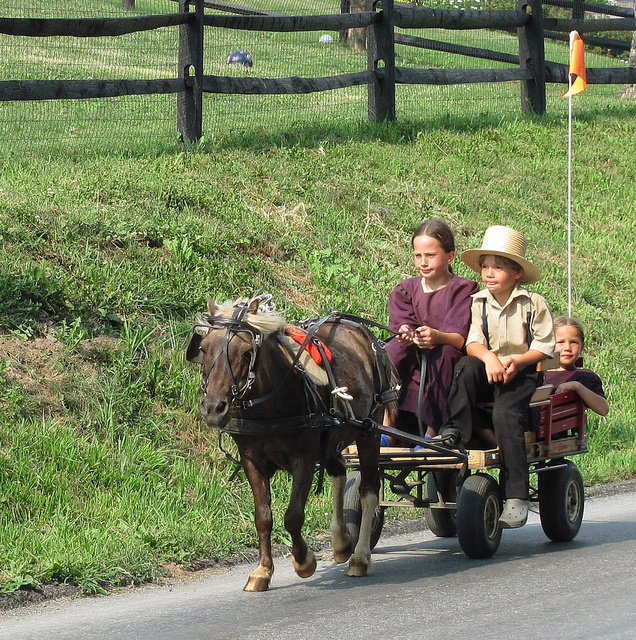 Except the one we saw had a few more kids on one of the kids was totally messing with his little brother. But it was a miniature wagon pulled by a pony just like this. How adorable is that? Pretty damned adorable.