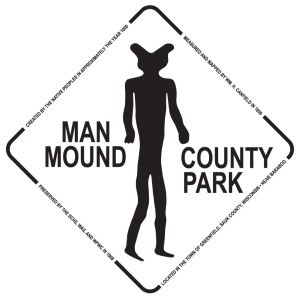 That is Man Mound.  END_OF_DOCUMENT_TOKEN_TO_BE_REPLACED

But I have this cousin here. His name is Carl. And he’s a trout fishing freak. OK, maybe the word freak has too many negative connotations. END_OF_DOCUMENT_TOKEN_TO_BE_REPLACED

END_OF_DOCUMENT_TOKEN_TO_BE_REPLACED

So, my adventures in the wild continue.

This morning, I woke up a 5am to go band ducks. I know, it sounds crazy. I mean, I lived in Brooklyn for 25 years, but here I am and this is what you do here.

Banding is when you catch a bunch of them in a net, put metal bands on their legs and then set them free.

The site sort of looks like this early in the morning, only, there would be lots of ducks eating the corn. It’s right along the Wisconsin river. 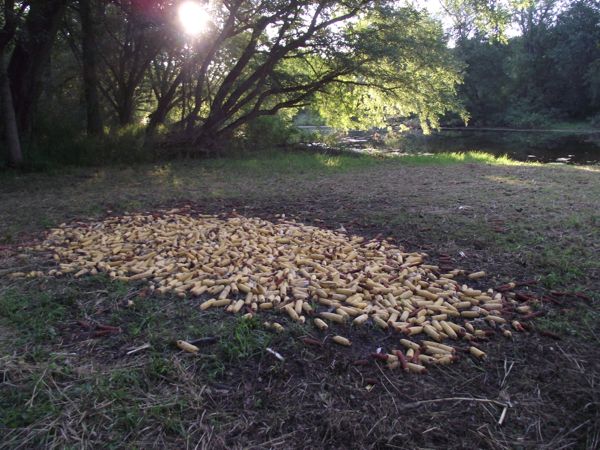 Somebody sits off to the side somewhere in a blind, being really quiet and camouflaged and waiting for what they think is the maximum number of ducks. Then, they press a button and bam, a net shoots out and a bunch of ducks are caught. 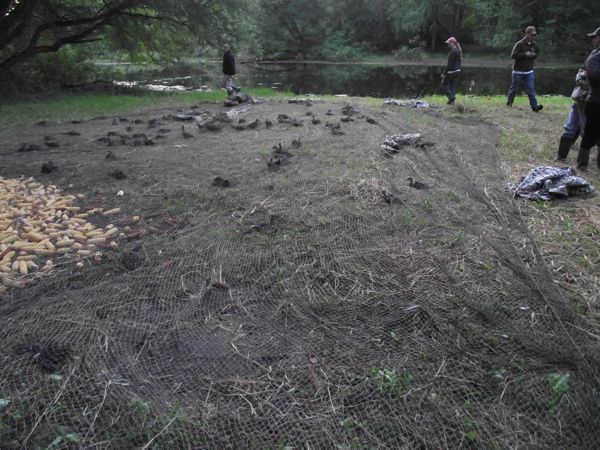 Don’t worry. They’re not harmed in anyway, they’re just a little freaked out.

We were a ways away and could hear the thing go off pretty well. We sort of had to jog to the site when we heard it because we were out by Curt’s house.

So basically, you have to work your way into the net and grab hold of one of the ducks, untangle him (or her) and then carry it over to be banded. 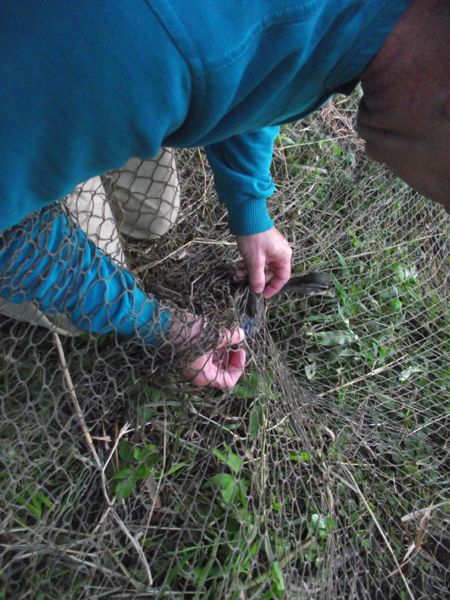 They tend to get their heads out one of net holes and occasionally, the longer feathers on the wings will be tangled as well.

The bands are all set up according to sex and estimated age. 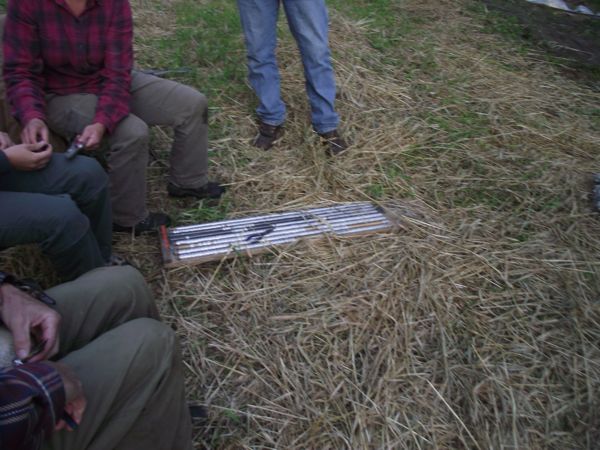 And once they figure out the sex and approximate age, they band it 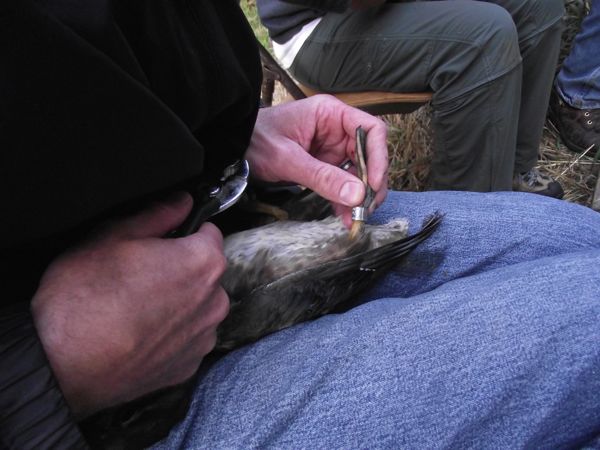 and let it go. These were wood ducks, so, to tell what sex it is, you look at the white tips (scalloped means female I think) and to tell the age, you look at the tail feathers to see if there’s any down left. Also, I think you can look at the wiener for the  male ducks. The older the duck, the bigger the wiener. But it’s really buried in there. Really hard to find, like worse than Hedwig hard to find. One guy was quite the duck guy. He’s been doing this for nearly 25 years. He says he must’ve banded over 10,000 birds. He had this giddy smile on his face the whole time.

Holding a duck is kinda weird. These were about the size of large pigeons. Squirmy as hell. To get a hold of them and control them, you sort of have to grab them by their wings and gently pin them back a bit, like making their “elbows” touch. Then, if they’re still squirmy, you can try to tuck their heads in the crook of your arm or, if you have big hands and can hold the wings together with one hand, you can use your other hand to cover their heads a bit. They don’t bite at all but they do scratch. They have, like, pointy toenails. I’m sure there’s a technical name for it, talons or something, but not as dramatic, cause, like, it’s a duck. My first one really got me good before I realized I had to stay away from their feet. Ideally, you want to hand the duck to the person who’s  doing the banding “business side up” which means legs up, butt out. but I didn’t do that. I was too worried about losing my grip. And yes, the front of my shirt was covered in duck poop.

This time, they banded 117 ducks, which I guess was a very respectable number. It would’ve been 119, but two people accidentally lost their grip and the bird got away. Very embarrassing. SO glad that didn’t happen to me. And one bird was already banded so they just wrote down the number and will look in the database to see if it was one of theirs or somebody else’s. I guess most of these birds will migrate down to Louisiana for the winter. Some go elsewhere, a few even went to Ontario, but most go to Louisiana.

So, to my family down there, if you see a banded wood duck, it might be one of my new neighbors from up here.