No, none of you were stupid or incompetent with your computers. I took a shortcut with the photos that didn’t work.

We are now in a wee little apartment. It’s actually quite cute. I promised I wouldn’t reveal it’s location because nobody wants this place to suffer the “Lonely Planet” effect. See, anything mentioned in “Lonely Planet” ends up getting swamped and/or having its prices raised. It’s annoying. I’ll take pictures and everything soon.

More importantly, yesterday, we took a horseback ride to a place called Chamula. We couldn’t take any pictures so what I’m using is what I found with a search. For me, the horseride was a nightmare. It was my father-in-law’s idea. He has a very romantic concept of horseback riding from when he was a little kid in Cuba. He used to take a train to see his family in the country and one of his cousins would meet him at the train with a horse to take him to the house. If I had a memory like that, I’d love to ride a horse every now and then too. Unfortunately, any memories I have of the equine nature are generally unpleasant. I think I used to ride horses, but the older I got, and the less time I spent around them, I just got really uncomfortable around them. The last time I tried to ride at my sister’s house, the damn horse I was on refused to do anything I wanted it to and she backed her butt right back into her barn and stayed there. I got nowhere. It was demoralizing. The horses we got were very docile, but the saddle I was one was a little loose, the stirrups were too short and the little knob you cling to for dear life was too small to really get a good hold of. About half way to Chamula, about 45 minutes to an hour into the ride, I started to panic and the guy who was walking alongside us all had to hop on and manage it for me. He kept saying “Tranquilo, tranquilo” as I hyperventilated every time the damn horse would skirt the edge of the road, which of course always seemed to dropped off into a ditch. We got there and I was relieved. When he asked if I wanted to take a car home, I almost caved. But I felt like too much of a wimp, so I sucked it up and said I’d take the horse.

I hadn’t done any reading about Chamula so I didn’t know what to expect. The outdoor market was pretty standard. 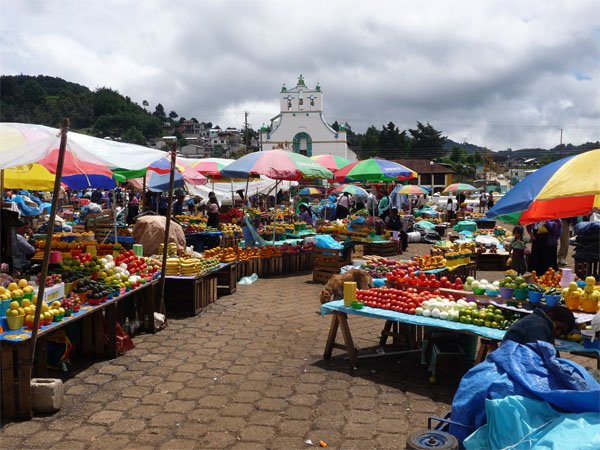 But there was this church.

Not so remarkable, right? Well, look at the inside:

There’s not been a mass in that church for 30 years or so. Maybe more. It’s roman catholicism wrapped up in indiginous practices. And their go-to guy isn’t Jesus. It’s John the Baptist. I have no idea what the Vatican has to say about this place but it’s pretty clear they haven’t tried to insert themselves at all. My mother-in-law says the church DEFINITELY would not approve.

When we walked into the church, the first thing I noticed was the blast of heat from all the candles. The place is practically on fire. Candles were everywhere. So many that my shoe nearly caught fire. One minute more and my linen pants would’ve burst into flames.

Men, women and children, some prostrate others on their knees, chanting in Tzotzil. It’s a weird sounding language. There seems to be a lot of shh sounds and they use the back of their throat a lot. It all made a weird percussive drone.

There seemed to be a lot of healthcare going on. Well, it’s healthcare if you consider waving chickens and guzzling soda part of your HMO. One woman in the center of the church was praying over a disabled child. In a corner to the left, an older man, probably a shaman, was waving a live chicken over a seemingly healthy young man. He waved the chicken over the young man three times and then, he placed the chicken on the ground and quietly strangled it. Not everyone had chickens, but almost everyone had bottles of coca cola and water. One guy who tried to hustle us for a shaman-guided cleansing explained that the soda was guzzled and the belch was supposed to help release the bad spirits. He also explained the chicken was supposed to absorb all the bad energy. I wanted to know what happened to the dead chicken, but we were afraid to ask him anything else because we didn’t want him to charge us.

The smell was amazing. The burning candles and the drying grass on the floor and all those people and chickens. It wasn’t a bad smell. It was just really organic and earthy.

We saw several people strangling chickens. It seems both men and women could be the intermediaries between the spirit world and the physical world. Here’s a video I found of an exorcism in the church:

The coolest thing about Chamula is that the State of Chiapas pretty much leaves them alone. They have their own police force. No federalists. They apply their own laws in their own ways. They are allowed to remain as indigenous as they want to be. Pretty damn cool if you ask me.

The ride home was much better. I got a better saddle and the horse didn’t want to trot as much. Though I’m sore like crazy. So my weak-assed neck wouldn’t jostle, I had to stand up in the stirrups a lot when the horse got too bouncy. Those are muscles that haven’t been used in like, well, EVERRrrr.

Today we go to San Lorenzo Zinacantán. I have no idea what to expect. The only thing I do know is if I don’t get my coffee soon, there’s going to be hell to pay.