But first, Chiapas de Corzo. We took a boat ride down Sumidero Canyon. 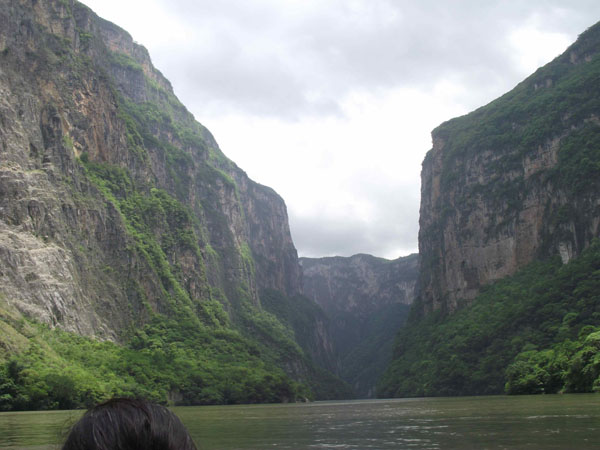 It was a nearly three-hour ride in the hot sun. You might recognize the layout from the logo of Chiapas. 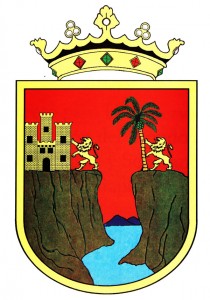 Huppy gallantly gave me his shirt to wear over my head so I wouldn’t burn my face. For him, a sunburn is nothing. A little discomfort for about an hour and then he turns brown. 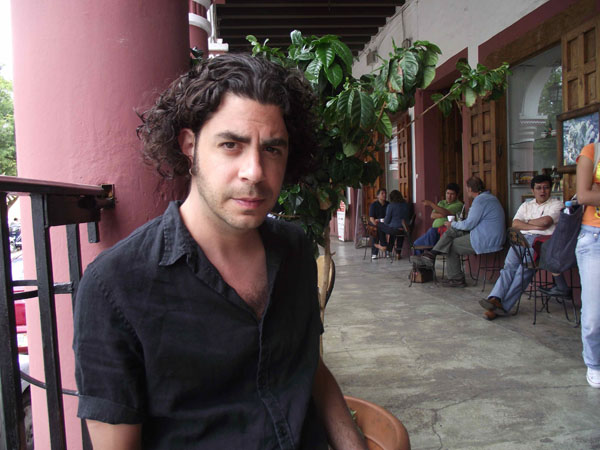 His dad is the same way. 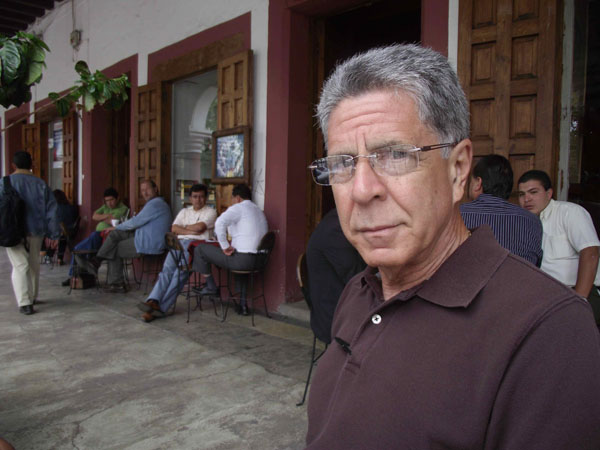 See? This is the day after the boat ride and neither one of them looks burnt.

EVERYONE on the boat is the same way. I had the whitest skin of everyone. I would’ve glowed in the dark had I not had the cover. 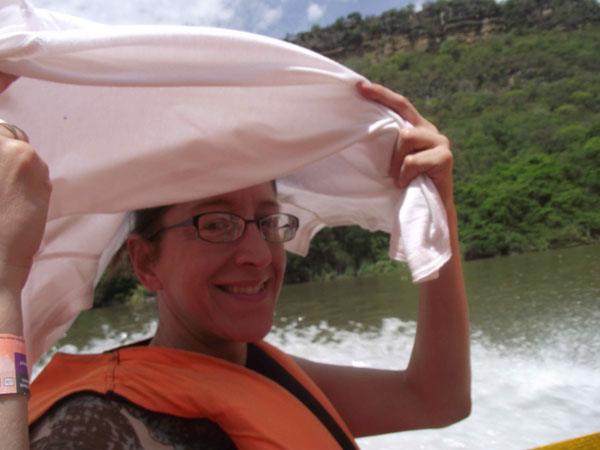 Anyway, the canyon was pretty cool. We saw a crocodile just hanging out on the riverbed, mouth open and smiling for the camera. 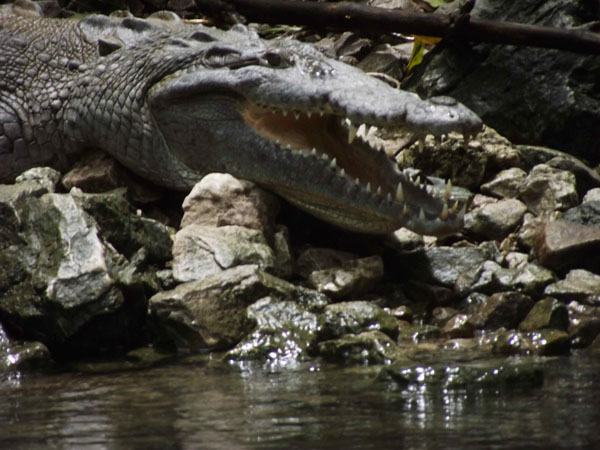 Well, I”m sure he was just sniffing to see if we were delicious or not, but it looked like smiling. We saw a bunch of birds, a bunch of egret type things, pelicans and a howler monkeys. But that wasn’t the sad part. The sad part was when we actually got to the canyon and there are these cliffs on either side. I couldn’t understand everything the guide was saying but I was suddenly overwhelmed by sadness. Turns out that back when the Conquistadores were acting like the biggest assholes on the planet, they were chasing down the indigenous people, trying to enslave them and the indigenous people said “Screw you guys, I’m jumping off here.” They all ran to the cliffs, men, women and children, and jumped to their deaths rather than be conquered. How defiant is that? Does our society even have that kind of strength in it anymore? Or would we just roll over and say different day, different rulers? What’s on TV?

After that, we got ourselves something to eat at a little place near our hotel. I had chicken with mole. We’re close enough to Oaxaca that the mole is pretty damn good. Not too sweet. Not too overwhelming. And there was this sort of Chiapan egg cream. It was this powdered goodness with cocoa and other stuff in it, whipped up in water with a little milk. Wow.

We went back to our hotel, gathered our bags, made our way to the collectivo spot, found our bus and we were on our way to San Cristó for 25 pesos each. The bus was a little rickety, there were holes in the upholstery and it smelled funny. But hey, it was just under $2 USD.

As the trip progressed, the bus climbed and climbed and the air got cooler and cooler. There must be a 20 degree difference between where we were and here in in San Cris. When we got off the bus, I had to put my jacket on!

After some difficulty, we found the apartment we’re renting but the other tenant won’t be out until Friday so we’ll be moving in on Saturday. We found a cute little hostel that only cost $180 pesos per night. That’s a little over $12 USD. It’s clean and has wicked hot water. We had ourselves some beer and tequila with our taco dinner and came back here and passed out. 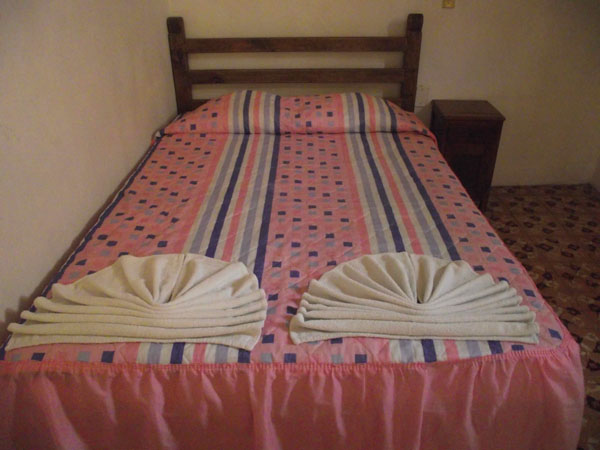 Of course, I have to mention that like Plaza San Blas in Cusco, there were firecrackers and M80s being set off until the wee hours. I think there’s a festival for St. Anthony or something coming up. I don’t mind that. St. Anthony is my family’s “go-to” guy. I’ll put up with a little noise out for respect for all the rings, wallets and sundries he’s helped us find over the years.

Today, we wandered around a lot. Found the mercado. I can’t wait to start buying food there and cooking it. And I love the way they stack stuff. VERY artistic. 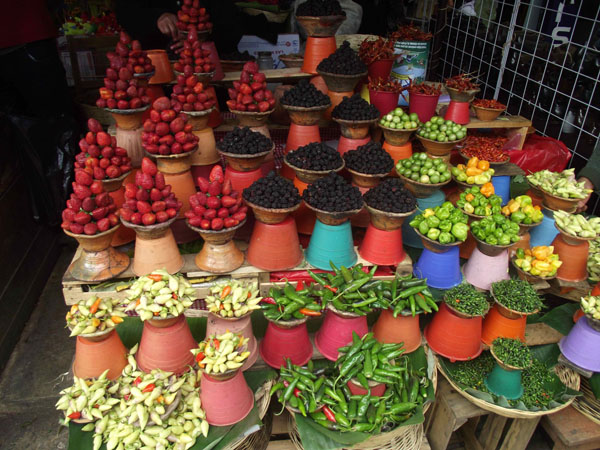 Here is my new favorite fruit: a rambutan. It’s a lot like a lychee. 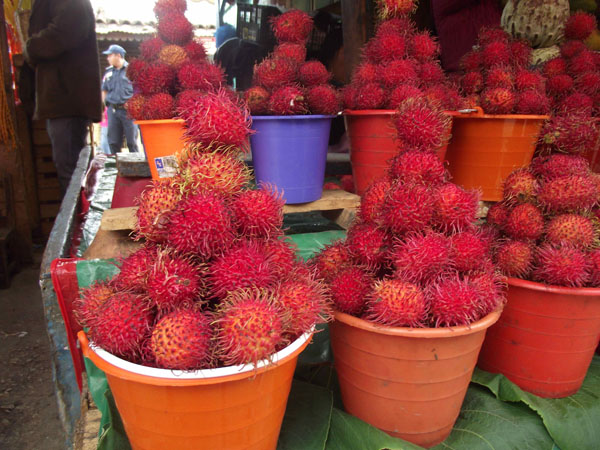 Tomorrow we’re going on a horseback ride. And I think either Sunday or Monday we leave for Pelenque, Yaxchilan, Bonampak for a brief tour of the jungle. Huppy REALLY want’s to see howler monkeys up close. One of the nights, we’ll probably stay in place that has hammocks that is right outside the ruins. Supposedly, the vibe is supposed to be way cool.  We’ll see how bad the mosquitos are.

3 thoughts on “We are in San Cristó”