Our adventure to the jungle began on Monday morning at 6 am… More or less. Mexico time is fuzzy. When they say 6 am, it could just as well be 6:15, 6:30, or even 6:45. You never really know. But to be safe, obviously, we were ready for 6 am. And so we waited. And waited. You know how it is when somebody else is late. You think of all the things that could go wrong and why it’ll never happen. By 6:15, we started to doubt whether we had given them the correct address. 6:30 am. Still nothing. Imagine our relief when they finally showed up around 6:40. The van was full so we all had separate seats. I had to sit next to a kid with too many tattoos and leaky iPod earbuds. (All the 20-somethings on the bus were listening to music.) Pedro braved the back seat where an unusually large woman was taking up nearly two and half seats. Poor thing just couldn’t fit. Pedro was a good sport about it though. The driver gave us his spiel that pretty much said the roads were dangerous and curvy and if anybody felt the need to barf, to please use a plastic bag. Not an auspicious beginning.

We got about 30 minutes into the trip and the van started to slow down. We noticed that whenever we would go up a hill, the driver would put on his flashers and drive on the shoulder. The damn van was broken! And we were barely into our six-hour trip! The driver waved down a few other tour busses to ask them if they had room for any more passengers. He asked if three of us would like to move over to the another van. Of course, the three of us popped up and ran out of the van. Sadly, the other driver changed his mind and we had to get back on our broken van. He did the same thing a few miles down the road and this time it was just two people. Lucky for Pedro, the large woman and her traveling companion moved over to the other bus.

We stopped for breakfast and apparantly, the busdriver had called in for help and another van showed up. This one worked AND it had air conditioning. Also, I can confirm that yes, the roads were dangerous and curvy and I was always aware of where our plastic bag was. I didn’t barf, but I came really close several times. Oh, and the roads all have these things called topes. They’re speed bumps and they’re everywhere. Just as soon as you pick up any speed, bam, the driver has to bring the vehicle to a crawl and slowly creep over the topes so as not to damage his suspension. The whole trip was stop, start, stop start, sharp curve to the left, sharp curve to the right, stop, start. Oh my gawd the nausea.

For the entire trip, the driver was chatting with the two 20-something girls in the front seat. He was very political and was telling them all about the Zapatistas. It was like they had never heard any of it before. They didn’t seem all that interested, but they were polite. It seems that Mexico is a very disjointed place. Each state has it’s own personality and own history and if you’re not from that state, you don’t know much about it. These girls I THINK were from Mexico City so they had no idea how important the Zapatistas were to Chiapas and more specifically, the indiginous. I wonder if they ever have to take a Mexican history class in high school. 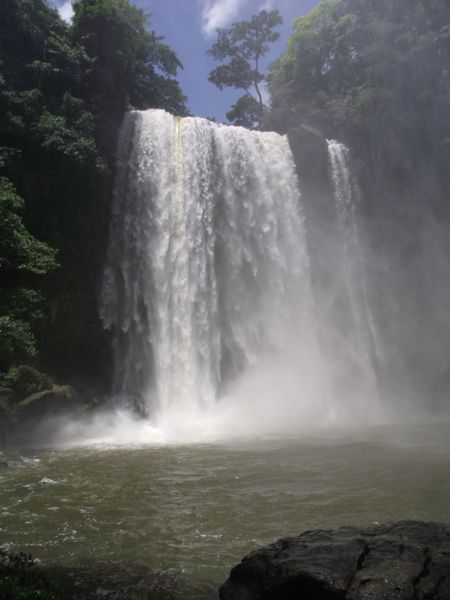 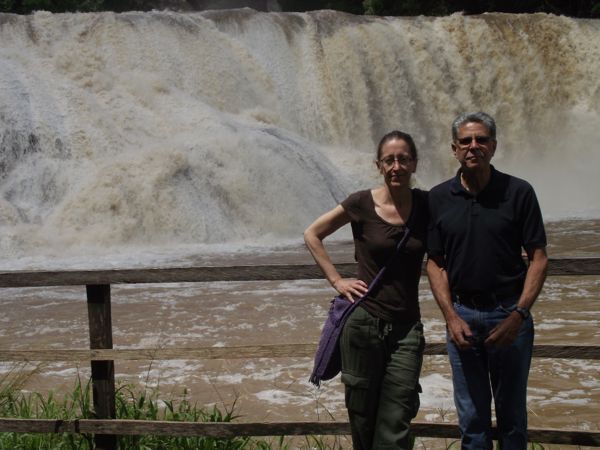 Sadly, the agua wasn’t so much azul as it was crap brown. (This is what is’s supposed to look like.) There’s been a lot of rain so the normally blue water was all churned up and muddy.  There wasn’t all that much to see but a waterfalls. Don’t get me wrong. They were lovely. But they were just waterfalls. Maybe if they had been blue….I dunno.

Next stop was Misol-Ha, which was more waterfalls. This one had a lot of trinket vendors and more paths. 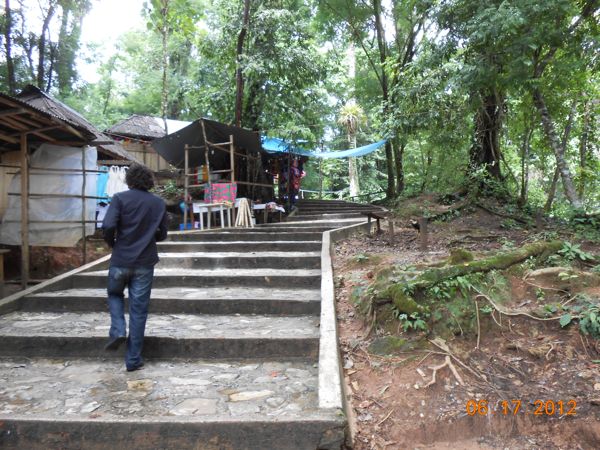 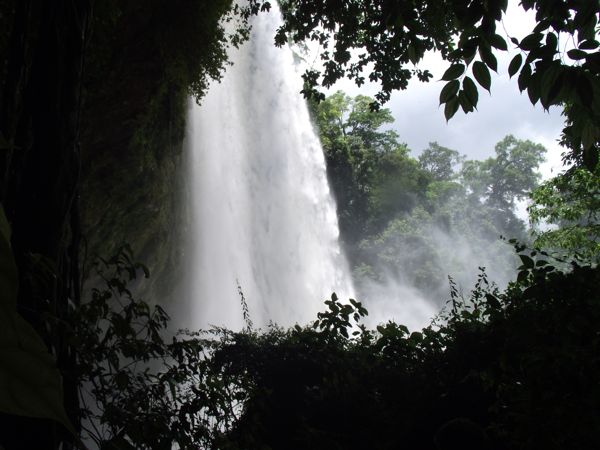 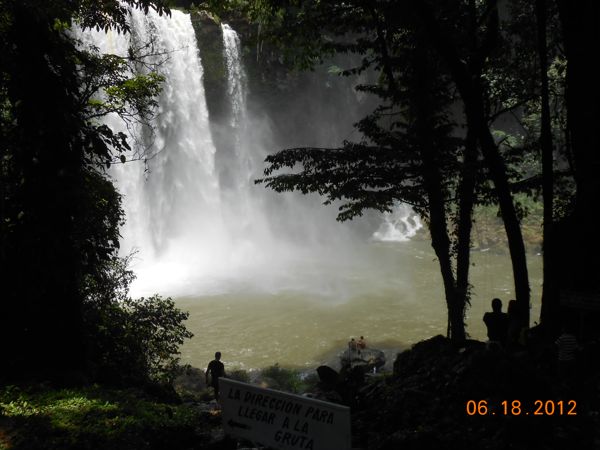 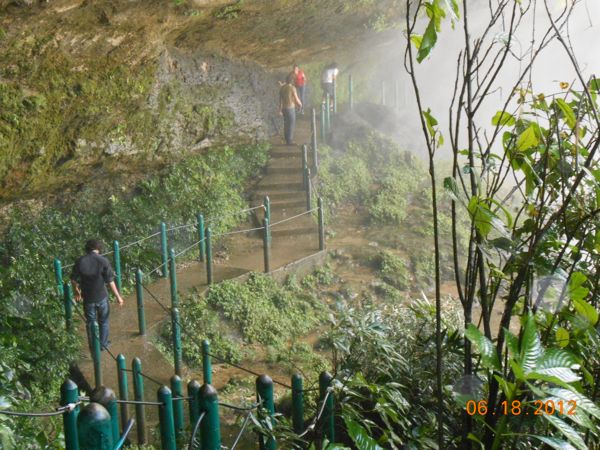 He of course got wet. Really wet. And pretty much stayed that way for the whole weekend. Because, as I discovered, NOTHING dries in the jungle. NOTHING.

We all piled onto the bus to go to Palenque which was about 20 km away. This was the bit I was excited about. 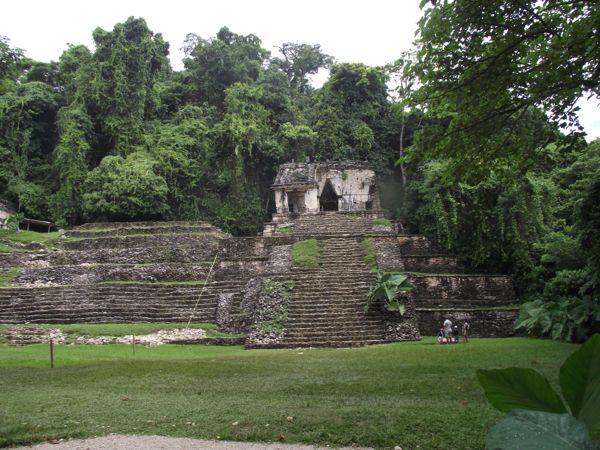 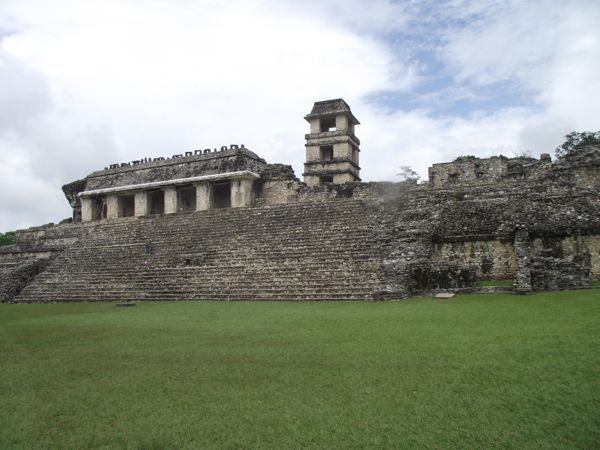 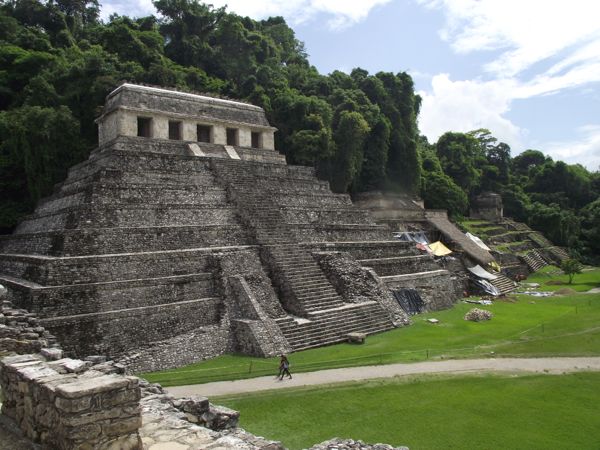 Can you see why? It’s massive! It’s no Machu Picchu, but still, pretty damn grand. Even whole courtyards are intact. 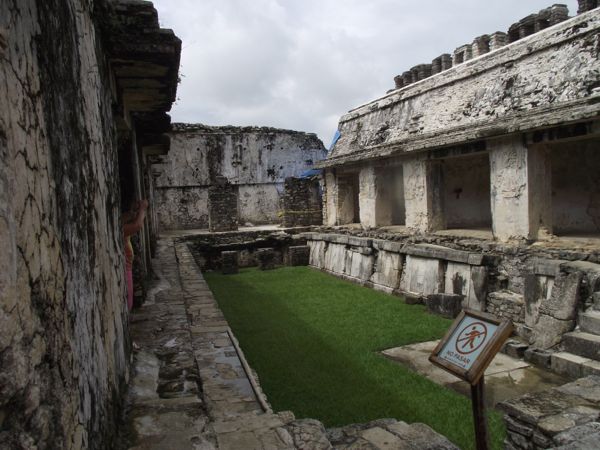 Oh, and here’s a toilet. Far be it for me to NOT include a picture of an ancient toilet. 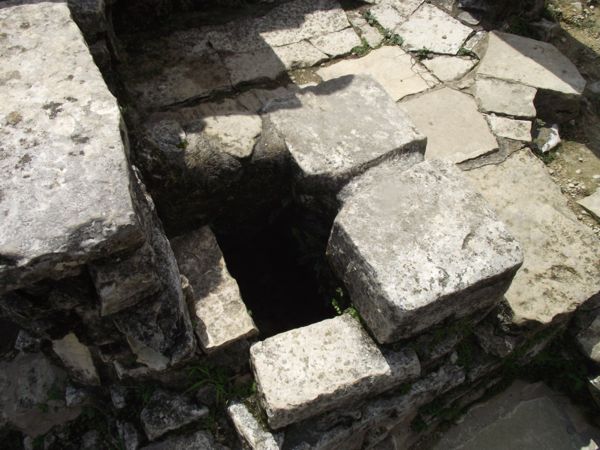 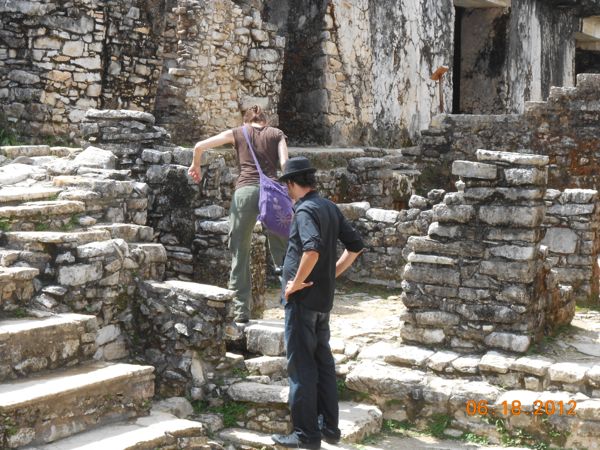 Well, that’s me about to demonstrate how to use it. Huppy was like “There she goes again.” 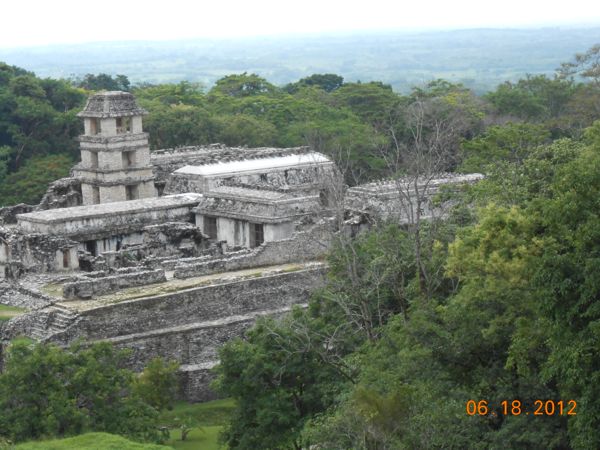 The vibe there was pretty neat. Not cool though. DEFINITELY not cool. It’s the jungle. It was hot and muggy and buggy. One of the most evil of the evil triumverates. They are my three least favorite things on the planet.

Oh, and there were monkeys! 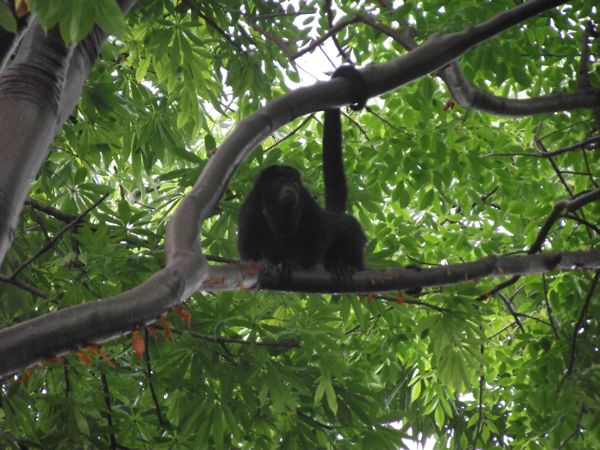 They were all over the place.

Here’s my favorite picture of my father-in-law, looking all Indiana Jones-ish. 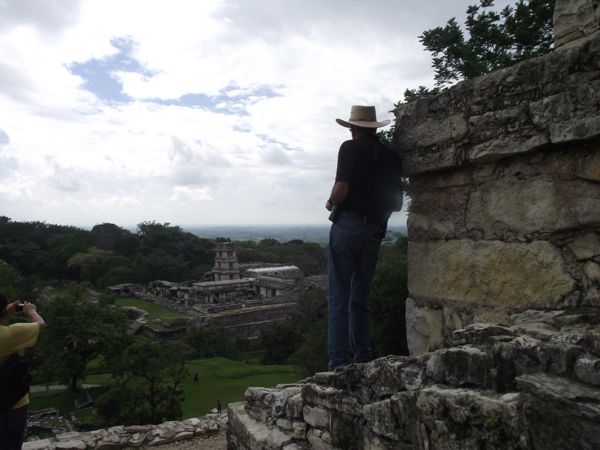 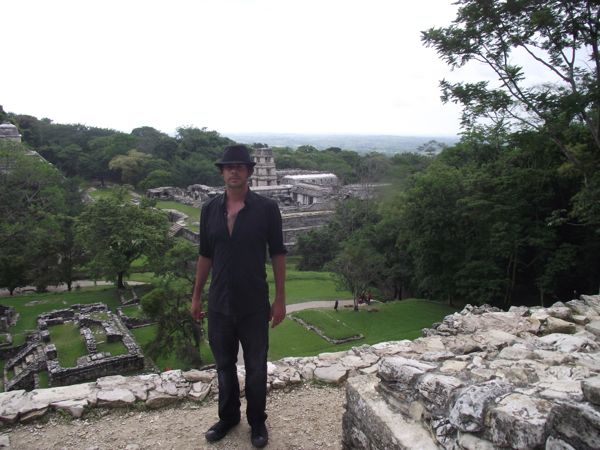 He smartly wore a long-sleeved shirt through most of the weekend. He was hot, but his bug bites were minimal.

We spent about an hour or so there. It actually takes about five or six hours to do the whole thing, but we didn’t have that much time and honestly, I’m not sure I could’ve managed it. By the time we got there, it was late in the day, I was hot, tired and hungry, which for me is another of the evil triumvirates. And let’s not forget the nausea from the ride.

We decided against staying in Palenque city and opted instead for a place called El Panchan. When the driver dropped us off next to this sign, I thought it was a joke. There was absolutely no sign of life and I thought “What the hell has Huppy gotten us into this time?” 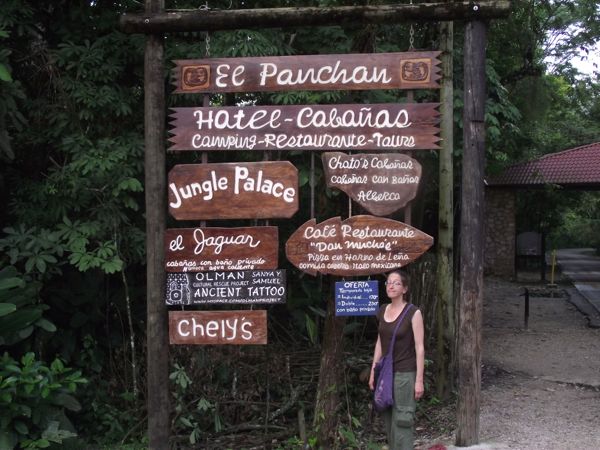 Basically, you walk down this dirt road and there are three different reception areas that offer pretty much all the same thing; a cabana with a private bath for about $350 pesos for the three of us.

Ok. Now here’s the other thing we’ve learned about Mexico; whenever you get information from them, it’s inexact and/or what you want to hear. So, if you ask them if there is hot water, they’ll ALWAYS say “Si.” No matter what the truth is. “Is it hot?” “Si.” “Is it hot 24 hours a day?” “Si.” “Do dragons fly out of the shower heads?” “Si.” It’s all the same. So naturally, when we paid for the cabana and asked “Is the water hot?” The guy of course said “Si.” And we believed him.

The cabana was neat. (Again, I will not refer to anything as being cool for any of these posts on the jungle. Nothing was EVER cool. Well, one thing was, but that’s in part three.) 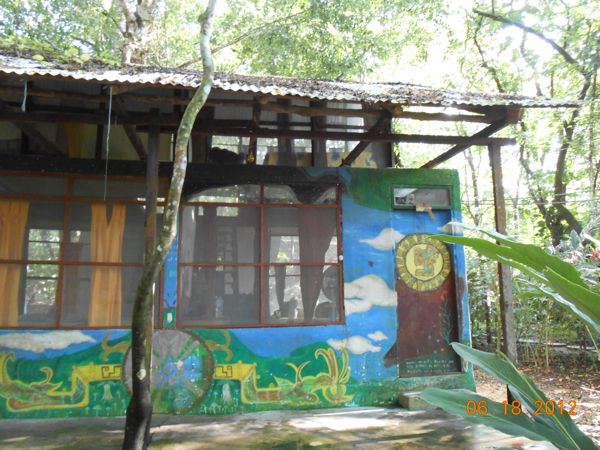 Our cabana was a screened in room with a double bed on the first floor and a couple of twin beds on the second. We dumped our stuff and made a bee-line for the restaurant. I don’t know about the boys, but I was hungry enough to start gnawing on my knuckles.

The restaurant was awesome. 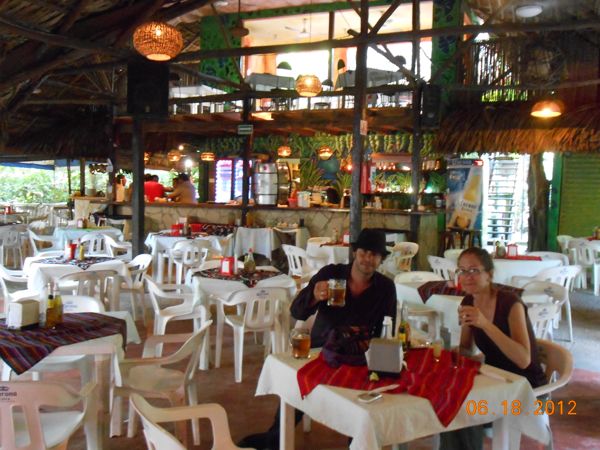 The food was good AND they had the tequila just the way I like it. 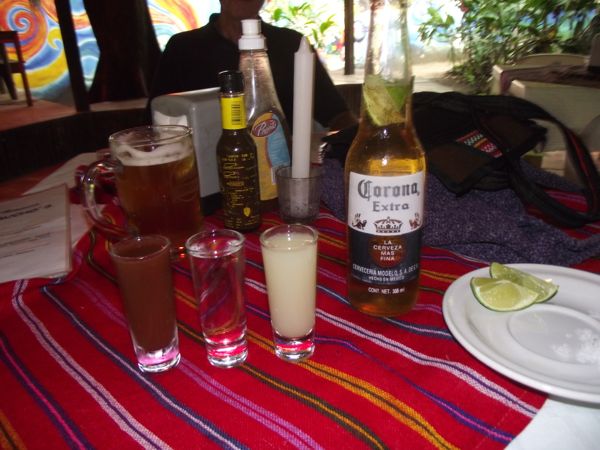 That red stuff on the left is sangrita. It’s a lot like spicy V8 juice. The middle one is the tequila blanco and the right glass has lime juice. You sip them in that order; salty, tequila, sour. Yum. And you also have to sip a beer along with it. I was very happy. 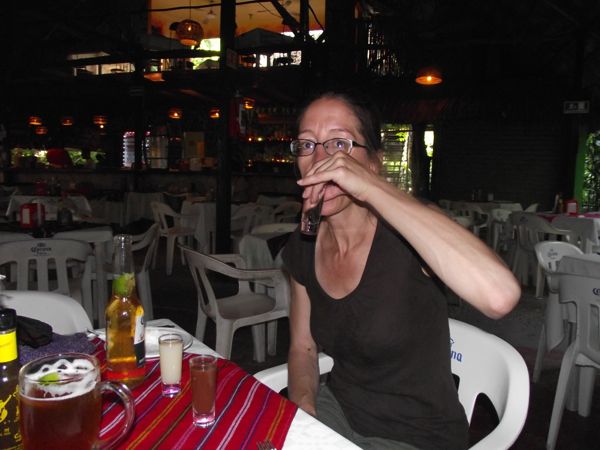 The dinner was tasty, everything was washed in purified water and they even had a vegetarian plate. In this part of Mexico, they use a lot of chayote. I cook with it back home, usually making a soup with it. Here, they just boil it like a potato and serve it with salt, pepper and butter. Pretty damn good. You can usually find them for cheap in the states, like three for a dollar, I suppose because nobody knows what to do with them.

Then, at about 5:30 pm, we heard this weird noise. At first it was “What the hell is that?” It sounded so strange and foreign and we realized it was the howler monkeys! Listen to this:

How awesome is that? Well, it’s awesome at 5:30 in the evening. They also do it at about 4 am. That’s not so awesome. It seems they travel in family groups of about 15 to 20 and they lay claim to a tree or two. That howling noise, made with some sort of sac they have in their throat, pretty much tells all the other howler monkeys that can hear it that this is their spot and don’t bother them.

Once the monkeys quieted down, it was finally time to wash up. I of course yelled “FIRST” and barricaded myself in the bathroom for a shower. That was an adventure. The water wasn’t ice cold, but to call it tepid would be giving it too much credit. I rinsed out my shirt and pants, thinking how clever I was to be doing that so I’d have fresh clothes in the morning.

I threw on my pajama pants and got ready for bed. Huppy, of course, had other ideas.

“What?” I said, trying to ignore him as I peeled back the sheets.

“Ugh. Fine.” I put on my boots and we headed out the door. Then we hear his father “Rox? Did you have water?”

“I can’t get any water out of this thing. It’s not only not hot, it’s nonexistent.”

So off we went to track down the guy who gave us the room. When we found him, he was hanging out at a big table with a bunch of his friends and did not look pleased to see us. He dutifully went back to deal with situation though.

In the bar was live music and lots of people and it was truly amazing that this place was in the middle of the jungle and was so thoroughly perfect… even in my pajamas.

We went back to the room after a few beers and tried to sleep. Huppy did better than I did. His dad had brought these little blue over-the-counter sleeping pills and Huppy popped one and went down for the count. The music went on until the wee hours and since we had to wake up for 5 am, I couldn’t relax enough to get any sleep. I should’ve taken the blue pill.

Oh, and remember what I said before about nothing drying in the jungle? When we woke up the next morning, my clothes were still sopping wet! I had to put on the cold wet pants (shiverrrr and ewwwww) and I just rolled up the shirt and put it into the bag. I had other shirts and that one was just unusable.

And that’s how I started day two of our jungle adventure; wearing cold, wet pants and totally exhausted.