For one thing, there are these cars driving around with loudspeakers, blaring information for this candidate or that. Even if I spoke good Spanish, I doubt I’d understand what the hell they were saying. It’s very garbled and distorted because the volume is so high.

As an aside, down here, they love everything loud, loud music in the bars especially. Last night, the bar we were in was so loud, I thought my ears were going to bleed.

Anyway, the election and all its propaganda and stagecraft is in full force right now. You see these posters all over the place. 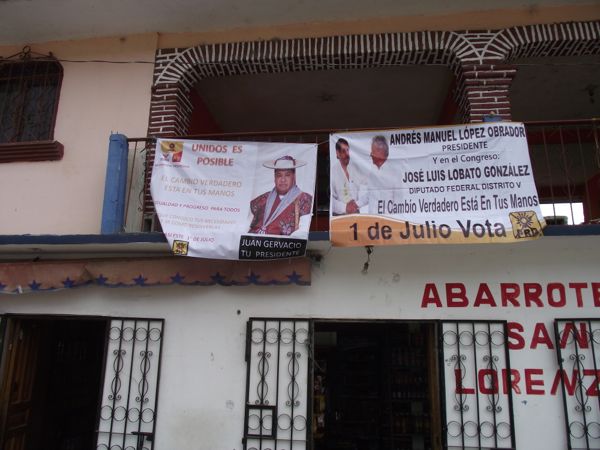 Actually, those are not the most obnoxious of the posters, though I do think the guy on the left looks extremely unhappy in that outfit.

No. The most obnoxious images are the ones that are part of the the PRI party. 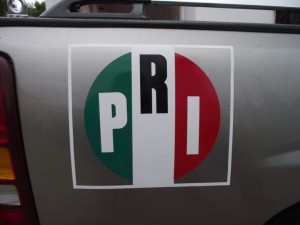 Here’s one of their posters: 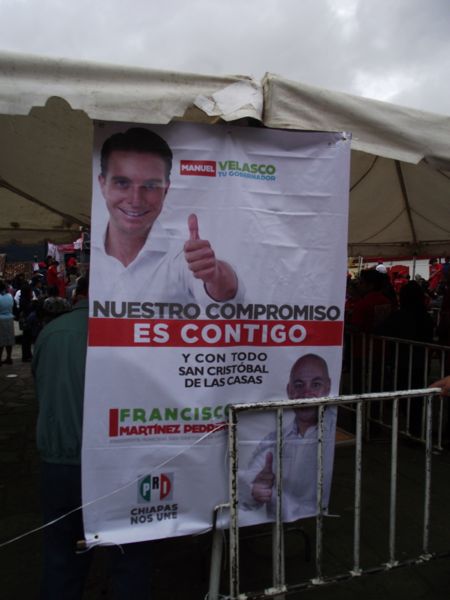 The young guy with the hair in the upper left corner of that banner I THINK is Enrique Peña Nieto. Could be Manual Velasco though. If it is Velasco, him and Enrique look A LOT a like.  Enrique is the alleged frontrunner for Presidente and he’s DEFINITELY the one with all the money. His stuff is everywhere. And you see that stupid thumbs-up thing they’re both doing? Everyone associated with that party seems to have their picture taken doing that stupid thumbs-up thing. I guess it’s the equivalent of Obama’s “O”. It’s ubiquitous and totally associated with the PRI.

God.  That marketing planning meeting must’ve been a crack-up:

“Hey! I’ve got a great idea!”  the jittery young man squeaked as he slurped the last of his fifth cup of coffee.

In stark contrast to the newbee’s energy, everyone else in the room had completely checked out. Trying to polish the turd that is the PRI, a party with a history of crony politics and corruption that rivals the Boss Tweed days of Tamany Hall, was proving too difficult for them. Their nerves were frazzled, their ideas trite and lacking substance. Upon hearing the boy’s voice, they all lifted their heads, hoping beyond hope this dumb kid would miraculously spew something useful. They didn’t even care if it was stupid, as long as they could work with it.

The young man, shocked that they were actually willing to listen to him, shakily put down his coffee, cleared his throat and muttered “What if…”

Yes, yes…… they all expectently leaned forward in their chairs.

“What if we unified the image of the PRI with everyone using a thumbs up to shows that, ‘Hey, we’re OK.’?” He awkwardly demonstrated the hand gesture and added a goofy smile for effect.

The room fell silent. They all looked at each other. Every single one of them knew it was a shit idea, but at that moment, with happy hour looming and spouses badgering them about all the time they were spending at the office, they all agreed.

Well, that’s how I imagine it went anyway. They had to have been desperate for an idea.

If you want to read a bit about the elections, here’s a recent article about it.

My feeling is this Enrique guy is the US government’s first choice. He’s corruption they can work with. Obrador is probably a better fellow, which means the US is doing whatever they can to discredit and/or marginalize him. You have to know that the US is meddling in this election, just like they do everywhere else they have an interest. The recent coup in Paraguay, the upcoming coup in Bolivia, all are riddled with the fingerprints of the good ‘ole US of A. I have no idea which side the drug cartels are on however, probably on the side of whomever won’t legalize drugs. There’s too much money to be made keeping them illegal.

Watching the rallies that are going on is a real study though. They’re loud, they have jumbotrons, they have kiddie rides and they have lots of free t-shirts. 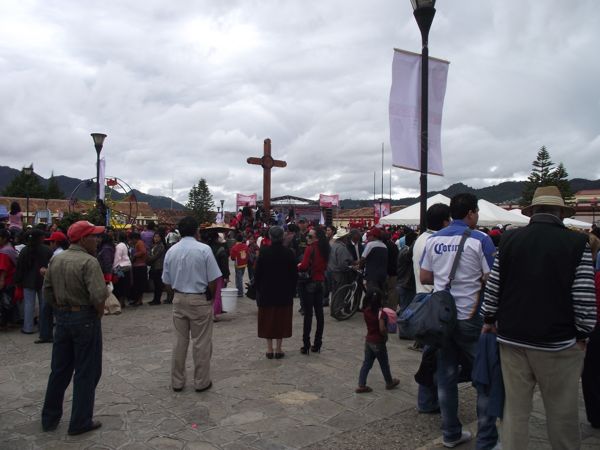 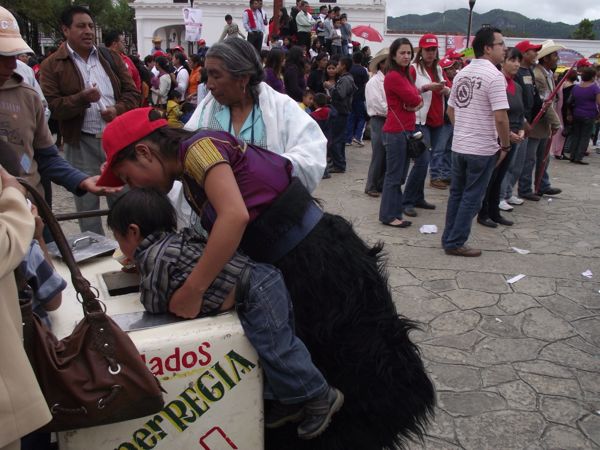 Here’s a shot of the bald guy. He’s running for Presidente Municipal of San Cristóbal I think, which is probably just mayor. I’m not really sure. It’s all confusing. 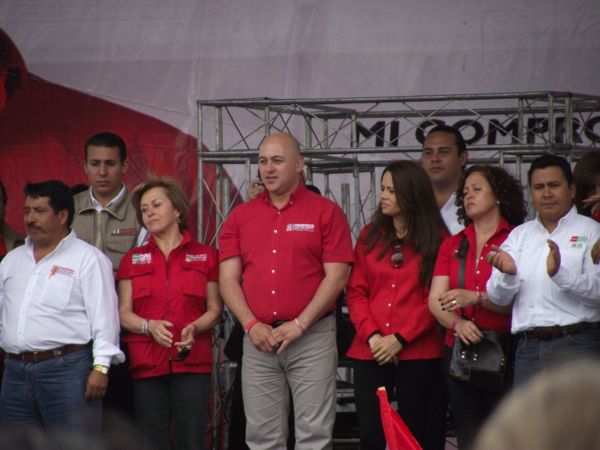 Boy does he look uncomfortable. The red and green colors are VERY important for the branding, along with the thumbs up of course. A lot of the indigenous and poor are illiterate. When they go to the voting booth, they need a strong visual so they know who to vote for. They’re probably told to “Vote RED GREEN” and then, whomever said that to them, will do the goofy thumbs-up sign.

For this rally, there was a smallish counter rally that was far more interesting. 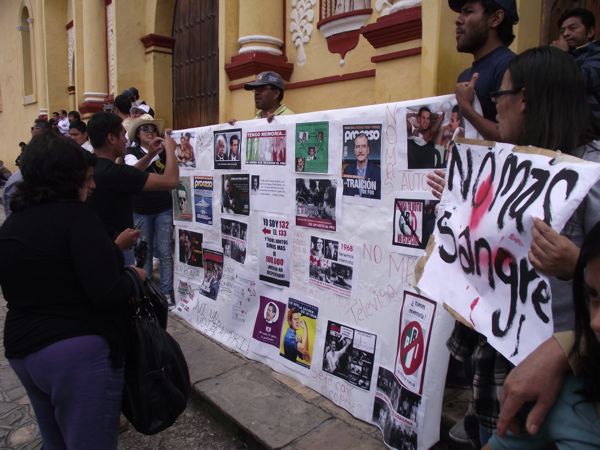 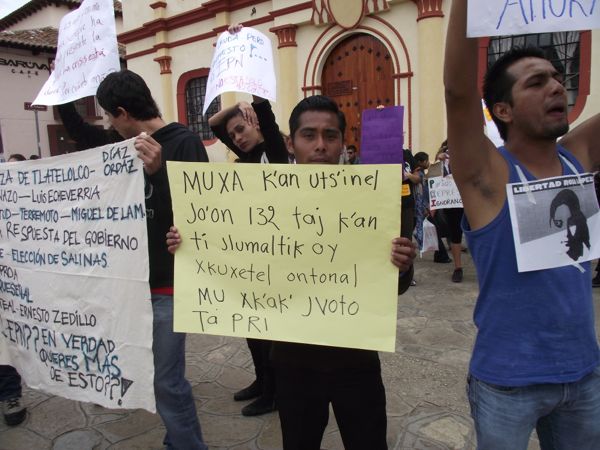 Don’t even try to pronounce that one. It’s in Tzotl I think. 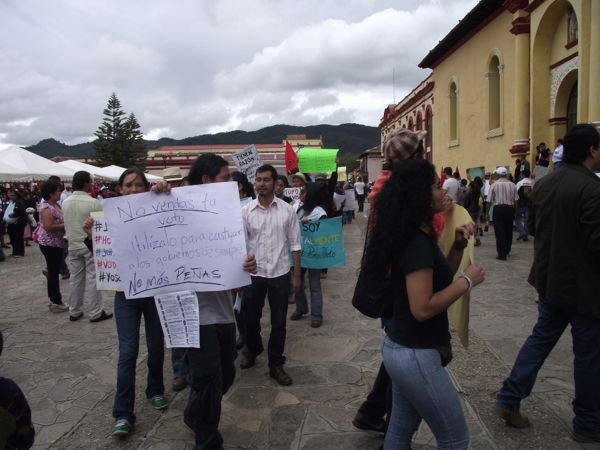 The coolest thing about the counter protest was that there was nary a cop in sight. Had this been the US, you can bet your britches that a whole line of cops in riot gear would be standing between them and the “state-sanctioned” rally. Here, there were two cops that I could see and both of them were nowhere near anything. They were chatting with each other all the way on the other side of the square.

Bottom line though, these elections are no different than elections in the US. The corporate candidates are presented, any candidates outside the corporate sphere are marginalized and outspent. In the US, the propaganda is just as plentiful, it’s just that an American firm came up with the super-slick Obama “O” and the word “Hope”. Here, it’s the red and green with the thumbs-up sign. The end result is that no matter who is “selected,” the moneyed interests win and the people are screwed.

UPDATE: Salon did a short piece on the election. According to them, the PRI is only popular out here. In Mexico City proper, it’s an entirely different story.