How much do I love the Mercado? MY GAWD I can’t even tell you.

There are two Mercado’s here. One of them is walking distance. 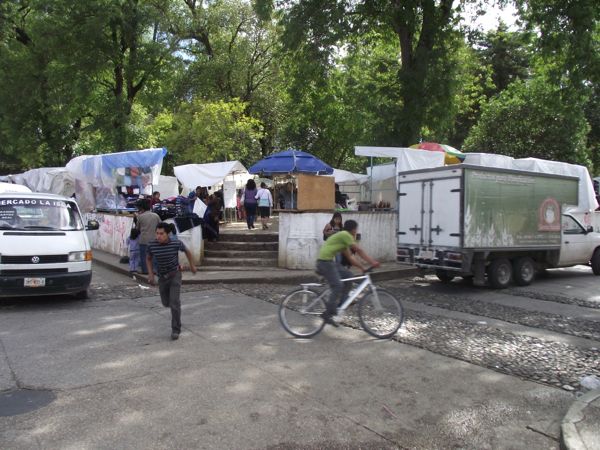 One way to get to that one is to walk through this outdoor market where they sell all sorts of stuff like jewelry, leather bags, all sorts of embroidered clothing and all for pretty cheap. Every time I walk through it I feel like I’m running a gauntlet. Everything is so colorful and inexpensive and they’re all willing to bargain with you and OHMYGAWD! I reach into my pocket full of pesos and Huppy has to literally drag me through the place before I do something stupid like buy a beautiful, embroidered indigenous skirt that I’ll never wear but looks oh so tantalizing just laid out there on the table.

The other Mercado is on the other side of town. It is a collectivo ride for us. It costs 5 pesos per person. 5 PESOS. That’s less than 40 cents!

Like South America, collectivos here in Mexico do not seem to be regulated, or at the very least, only a little. You just hop on one of these things, the door could slam onto your finger, or not. The seats are a little rickety, as is the van. The driver is usually either on the phone or listening to loud music. He has his seat and dashboard all decorated up with carpeting or doilies or religious statues or Disney character stickers, whatever they want to make it “their” space. (One guy had so much stuff around his window, I don’t know how he could see traffic clearly in all directions.) They stop and start suddenly, the door usually opens before the van comes to a complete stop, the drivers talk to each other as they pull up to a light, they drop you off wherever you want on their route, no designated drop off spot crapola, and if you’re a little old lady, they’ll go out of their way to drop you off at your house and NOBODY will complain because the people that ride them are totally cool.

One guy got on and was busy texting on his phone. He reached into his pocket, pulled out a 10 peso coin, just held it out, some passenger took it and passed it along to the front, the driver made change as he drove, handed it back and the 5 peso coin made it back to the texting guy. Not a word was spoken, he never looked up or stopped texting. It all just works somehow and nobody has to tell anybody how to behave, how to sit, how to drive, how many can be on, where it can stop, nothing. No signs saying “These seats are for the elderly and handicapped” or “Don’t lean on the door” or “Don’t stand in front of this line” or “Driver must be paid before you enter.” Nothing. It just… works.

Anyway, that farther Mercado is huge… and parts of it are dirty. REALLY dirty. 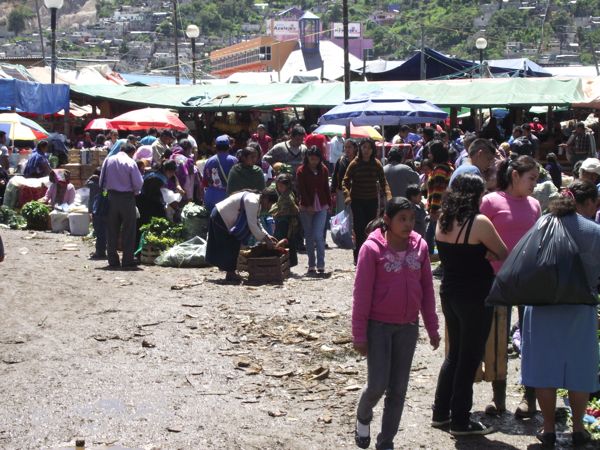 That’s the outside of it and there was mud and dirt and garbage like you wouldn’t believe. These people set up their little groupings of whatever it is they sell right next to a heaping piles of rotting garbage. The smell was outrageous. Needless to say, we went inside for our purchases. 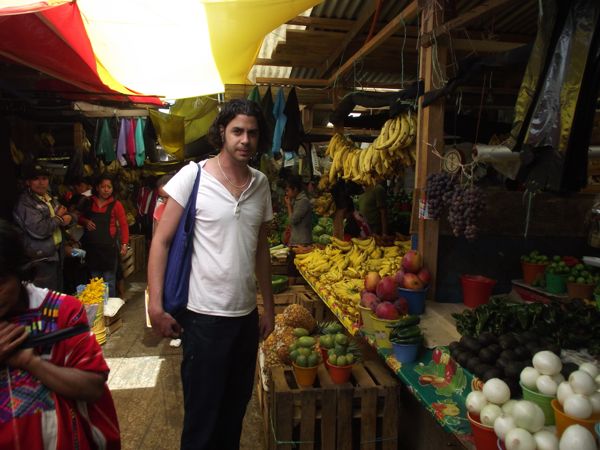 (Yes, that’s a bucket of mangos, about five of them for 10 pesos. Hard to believe, but Huppy is mangoed out.) So much to buy, so many people selling, so much commerce going on. It’s all so great. And none of it is regulated or anything. Maybe on the inside, they might have to pay a small fee to rent a space or a little table, but that’s it. There are no cops, no health inspectors, no “authorities” running around, making life difficult for anybody. And obviously, in some ways, that’s bad: 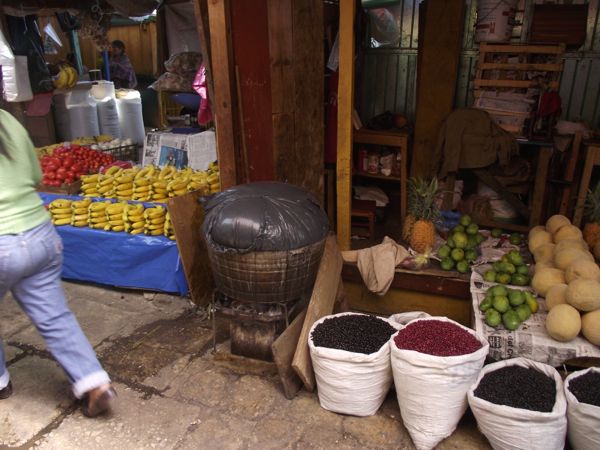 That plastic bag is the cover for corn that is being steamed. Hot steam and a plastic bag  meant for garbage and not food. Imagine what’s leaching into that water. I wouldn’t eat it, but I’m smart like that. Here’s another example: 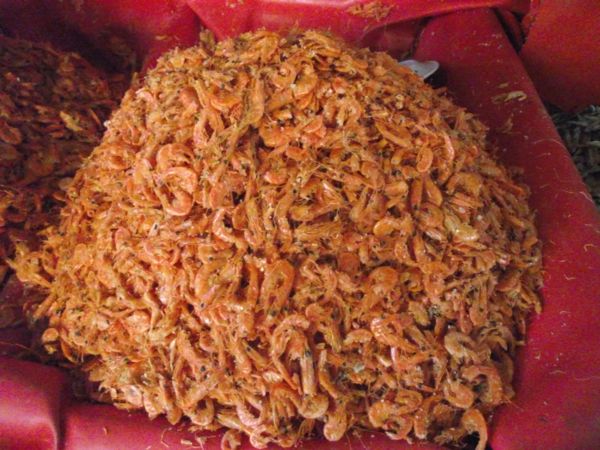 But if you don’t have the sense to not consume shrimp that’s been unrefrigerated, uncovered and attacked by flies, then you how you have survived your life to a point where you were traveling in a somewhat remote part of Mexico would be a complete and utter mystery to me. Nobody needs to tell me to not buy that, I certainly don’t need the “authorities” to tell me not to eat it. And the folks selling it don’t need someone telling them to cover it up or refrigerate it because obviously, some folks DO buy it and eat it and survive just fine, but they have gut flora I can only dream of.

Nobody needs to tell the people who sell the stuff how clean it should be or how it should be packaged or presented. You buy it, you wash it, you peel it, you use your common sense and you do whatever you have to do to it and it’s all good. In the States, every little thing is so regulated and “so ordered” by the State, that not-so-benevolent father figure that sucks the red out of the lollipop of life. I’m dreading the prepackaged and sterile nightmare that is food in the US. Not to mention the prices. Yikes. And I know, the recent hot spell is going to make food ridiculous, so it’s going to be worse. Jeebus. I will certainly miss buying seven big onions for 10 pesos and a kilo of chopped cactus for 5 pesos. Hell, who wouldn’t?

Or even finding a delightful place in the Mercado that makes an amazing vegetarian tostada for 10 pesos: 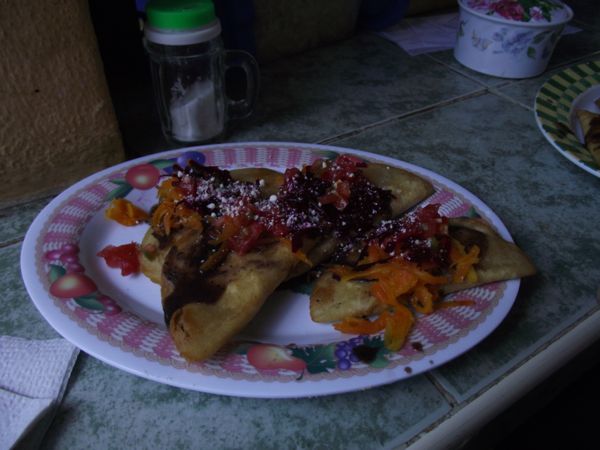 The girl made those little things right there in front of you. She pressed the dough, put some cheese in it, folded it and dropped it into the fryer. Then she poured some bean sauce on it, tossed on some pickled beets and carrots along with some crumbly cheese… my word it was delicious.

And let’s discuss the food choices, shall we?

Peppers are divine, so spicy and varied: 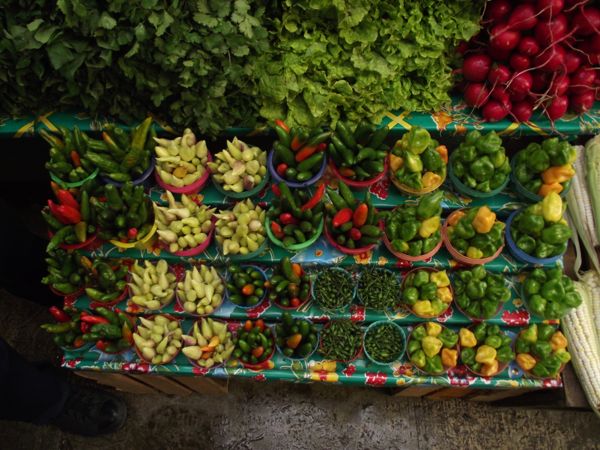 These are my favorite. They are VERY spicy and wonderful. 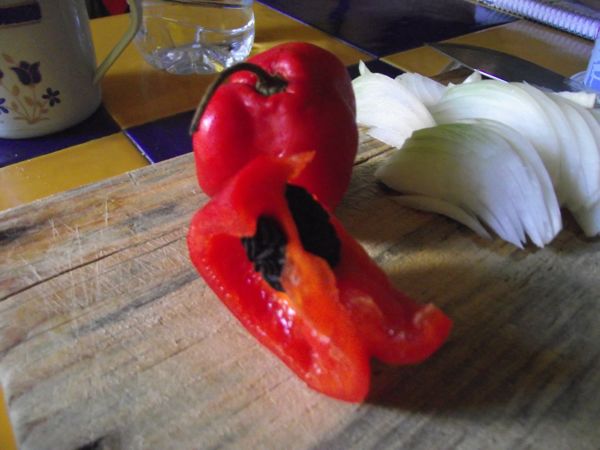 That little bunch of black seeds are packed in there so tight, probably because even THEY’RE afraid to touch the inside of the pepper.

There are more tomatoes than you can shake a stick at: 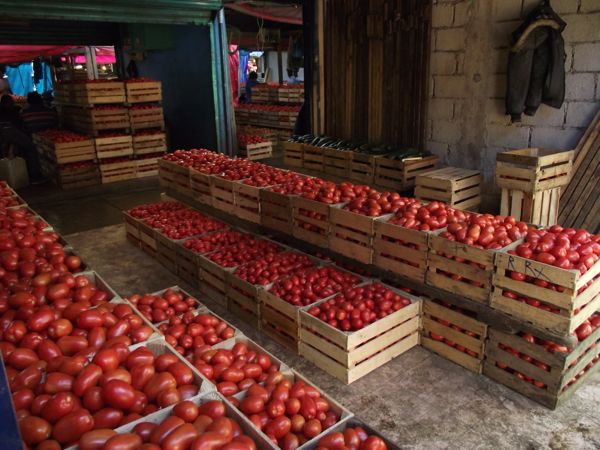 You can even get hand-rolled cigars: 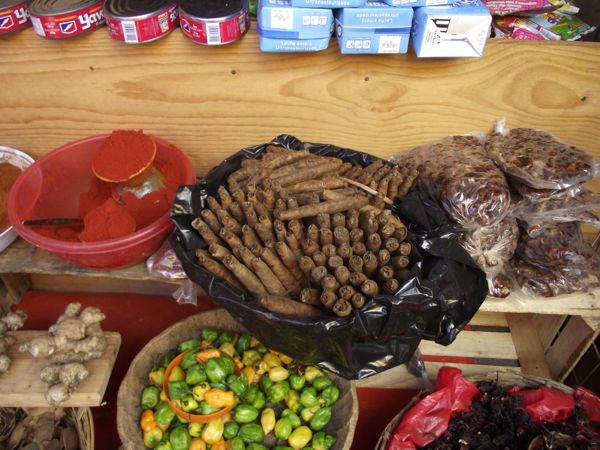 Which can usually be found next to the toasted bugs: 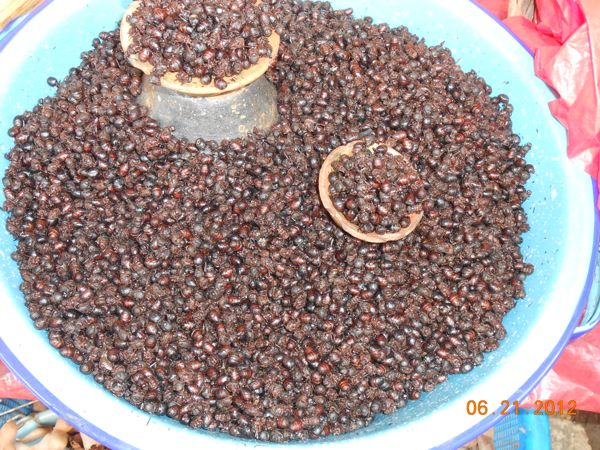 (they were VERY nutty and a little greasy)

And while I won’t partake of the more {ahem} unusual bits of the cow: 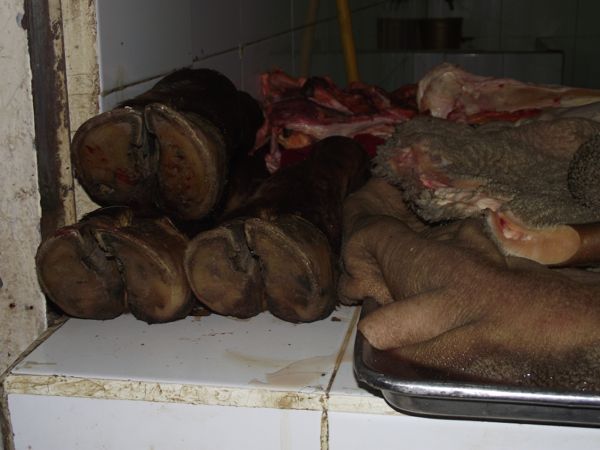 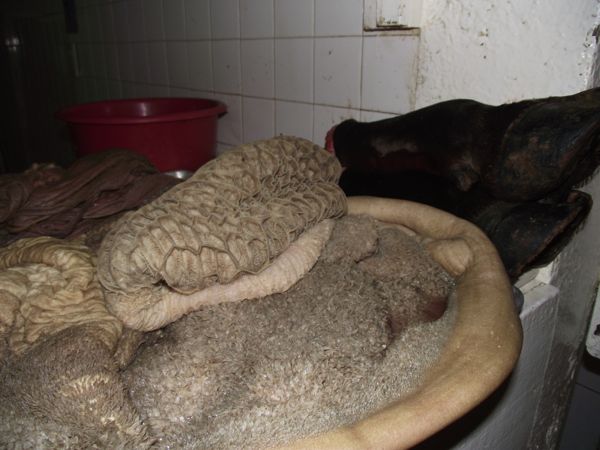 This is either intestines or stomach lining… or both. All’s I know is the camera did not capture how green some of it was. 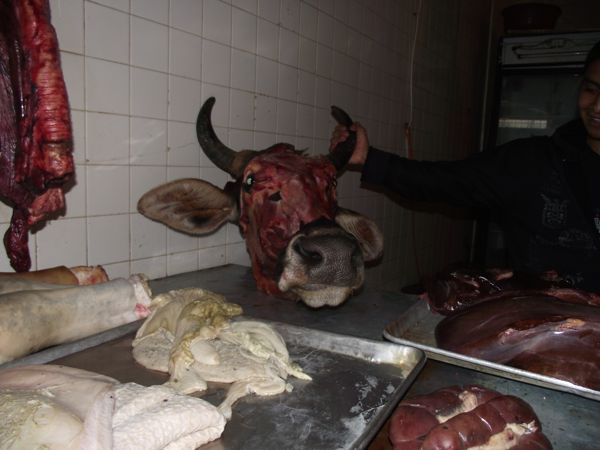 What the hell does somebody do with a whole cow head?

There are odd bits of chicken: 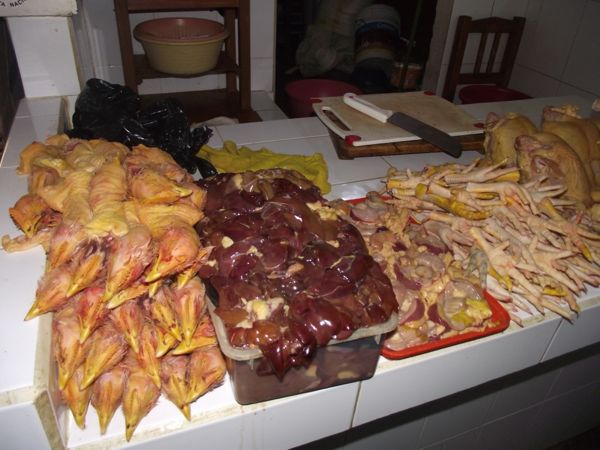 And Huppy won’t even let me even think of getting the dried fish, 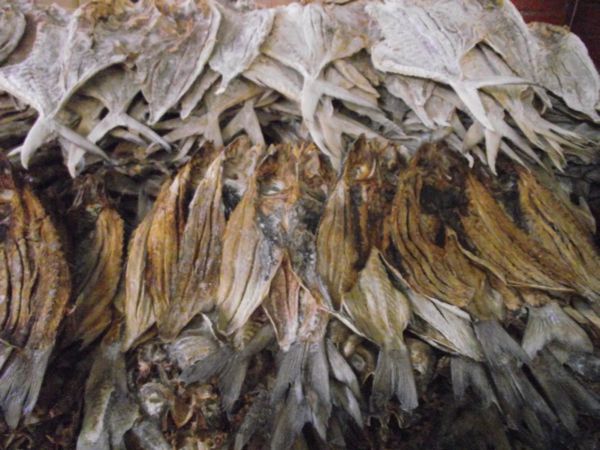 (Though I want to because I have very fond memories of Christmas Baccala salad, mmmmm.)

The flowers are fresh and cheap: 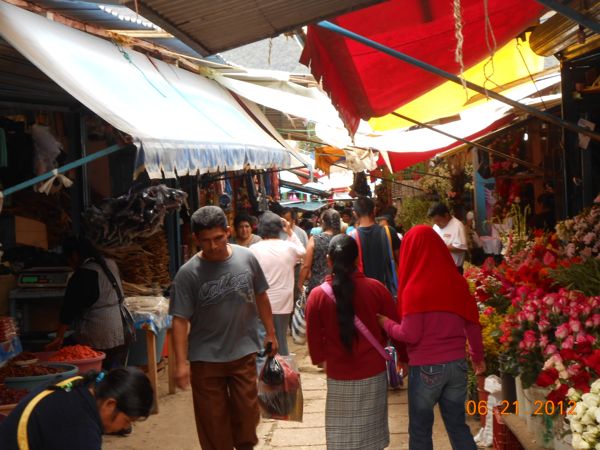 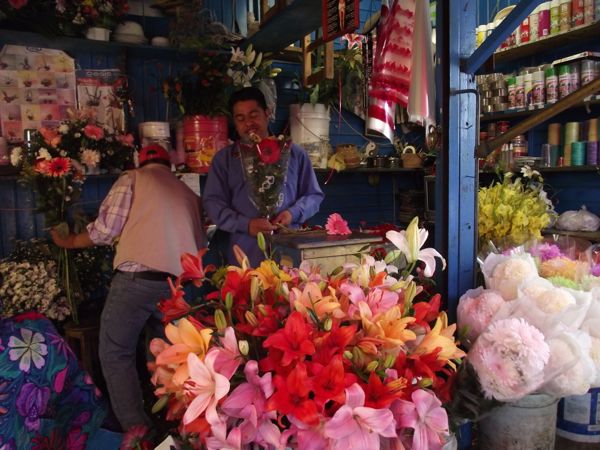 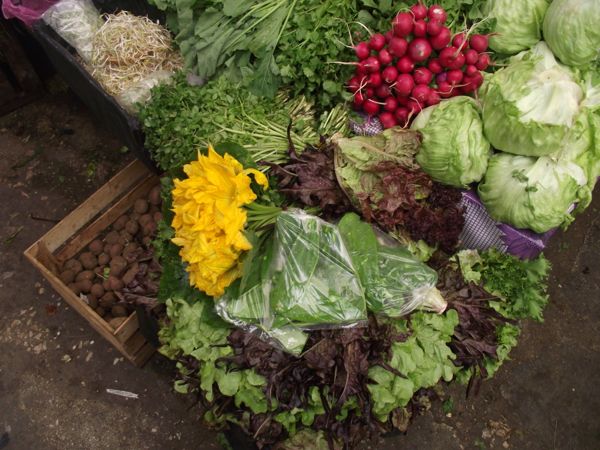 and everything you could possibly want to make your own mole… 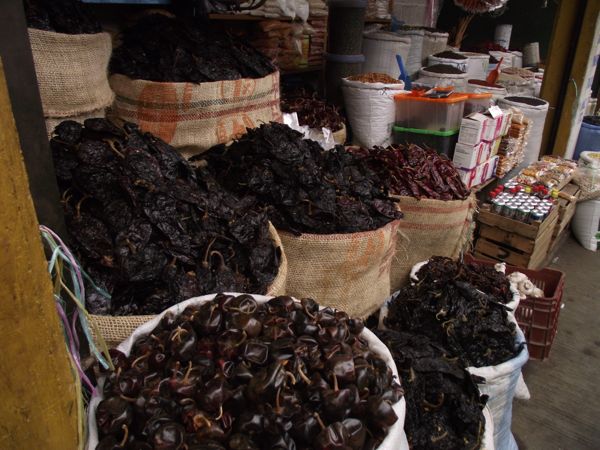 And look at they way this guy set up his pre-cut fruit: 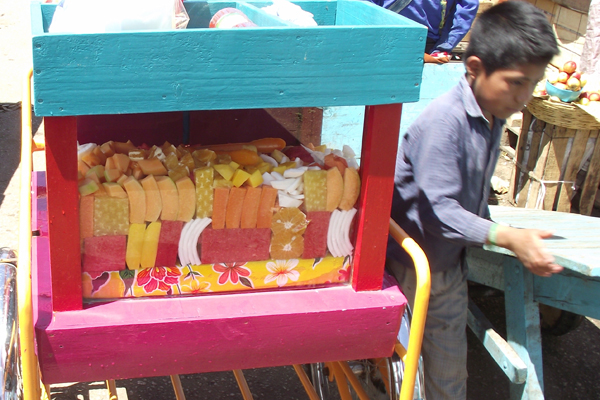 They even sell pottery! 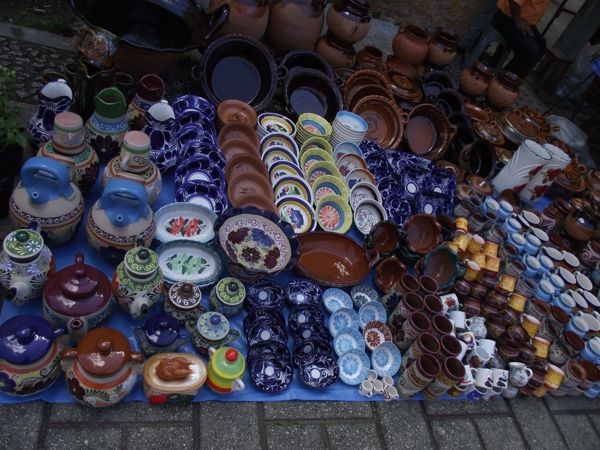 Jesus Christ, we are so goddamn screwed in the States when it comes to our food. If they’re not trying to poison us with GMOs, they’re trying to rob us. Looking at how much food there is here, I cannot for the life of me understand why anybody has to go hungry. Isn’t there something going on in the States with food stamps these days? They’re cutting them back? I mean, WTF? Why the hell don’t they just subsidize the necessaries — eggs, milk, certain vegetables, grains — so everybody can eat well? It makes no damn sense to me!

Oh, I had no idea when I started this post I would end it SO PISSED OFF.

So I don’t end on such a negative note, here’s are two great signs. 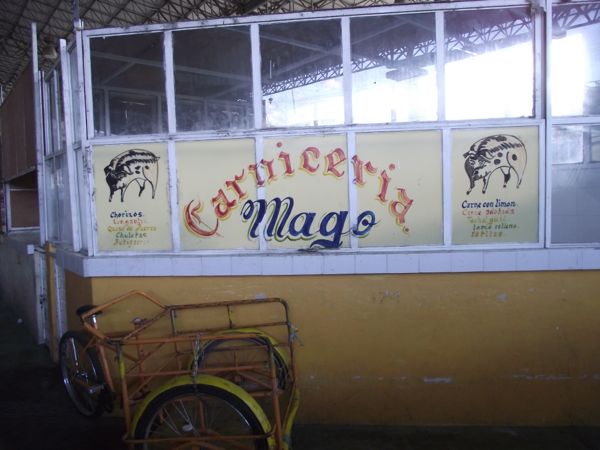 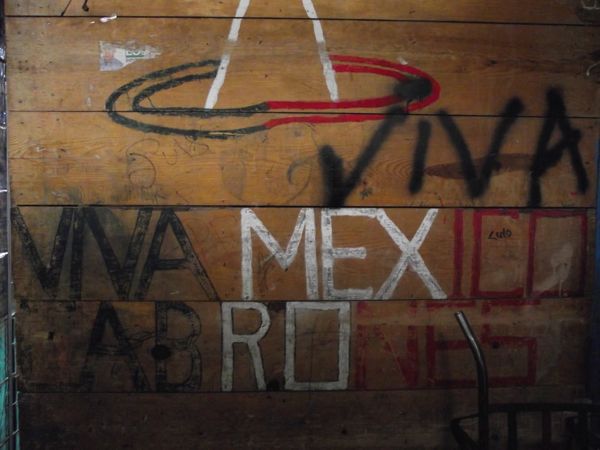 Just so you know, we have a tentative return date of July 27th. But the adventure won’t end there. Huppy is promising me a trip to Cajun country.

3 thoughts on “Time to wax poetic about the freakin’ Mercado”