I’m visiting my cousin in Sauk City. He lives on a farm in the middle of nowhere. I can see the Milky Way here at night! Lagniappe loves it. I let her wander around some of the land without a leash. She thinks that’s just awesome. 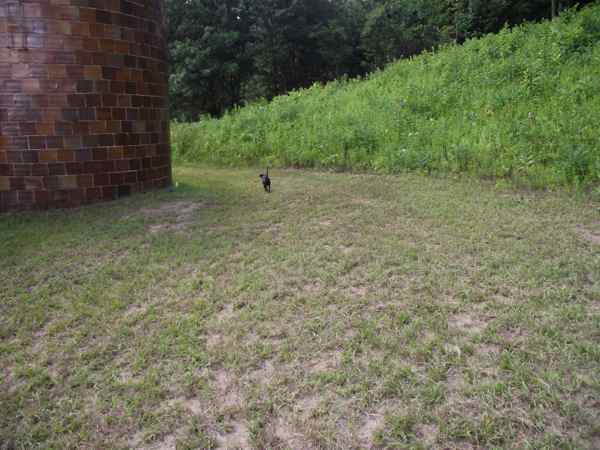 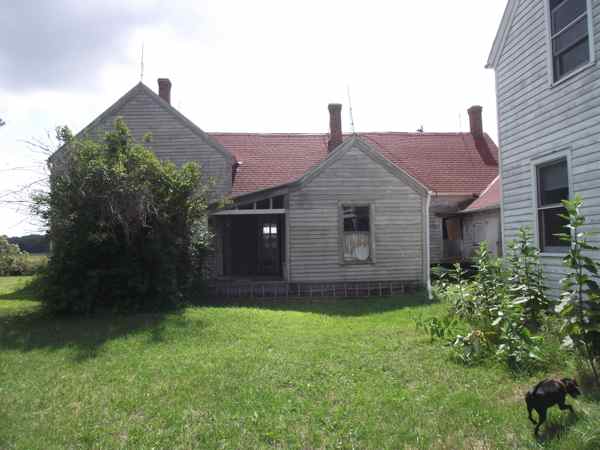 This part of the house is from the Civil War and is being renovated. The modern part that is lived in is on the right. Wisconsin houses tend to be built up over time, just sort of added to here and there when need, time and money come together. 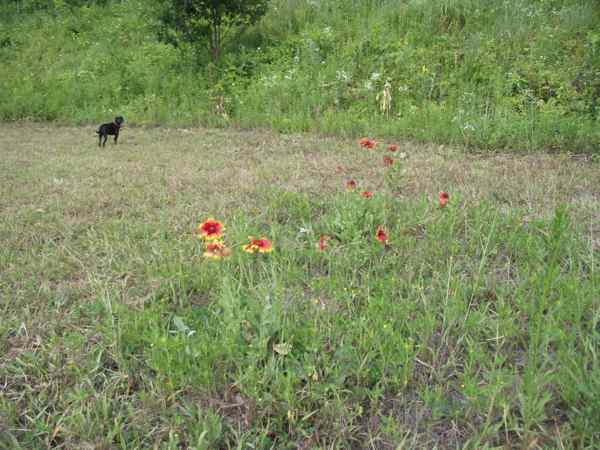 When the guy mowed the lawn, he left this little wildflower patch. Lagniappe wants to run into the grass, but I don’t usually let her because that’s where the ticks are. 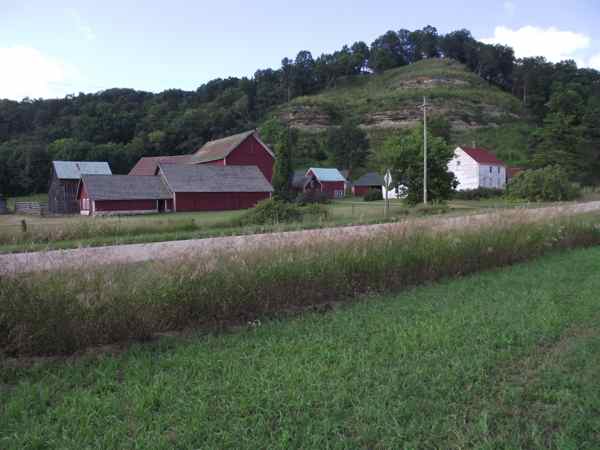 This is the house from the road. The white house on the right is where he lives. The rest of the buildings are collected from other properties. That big hill in the back is called a bluff.

At the back of his house are these bluffs which I guess are the “thing” here in this part of Wisconsin. There is no fracking in Wisconsin, but apparently, there’s fracking sand in them thar’ bluffs and folks around them are fighting hard to keep the fracking companies out of their area. Other states with bluffs have instituted moratoriums, but not Wisconsin’s lovely governor Walker. Several communities have been devastated by the ‘harvesting’ of fracking sand from these bluffs. I’m learning all this stuff from my cousin. Curt’s a conservation guy so he knows EVERYTHING there is to know about this area. (He’d of course argue that he doesn’t know everything, but to me, he’s a  Wisconsin Wiki.) (He’s written books. Lots of books.)  So, to the west of here to the Mississippi  is what’s called the Driftless region, which means that during the big glaciation, no glaciers covered this part of Wisconsin. As a result, it’s not flat. There these bluff things and valleys and decent farming land, but no huge tracts of open land. As a result, big industrial farming just hasn’t taken hold and what you have is a bunch of small, individually run farms. And because of that, politically, the population, while rural, leans towards being progressive. Urban progressives aren’t terribly uncommon anywhere else, but rural progressives? Rare beasts indeed. Conservation, the environment, human rights, and community cooperation are all big things around here. And they’re not the smug progressives you get in Madison. Folks around here are willing to put their money (and/or time) where their mouths are. That’s pretty cool.

Anyway, my cousin is renting from these guys who collect buildings. I don’t know the whole story, but it seems like when they buy a bit of land, they move whatever old building that was on it onto this piece of land. What they’re going to do with it all I have no idea. Right now they have a couple of chicken coops, an old smithy from the 1830s, 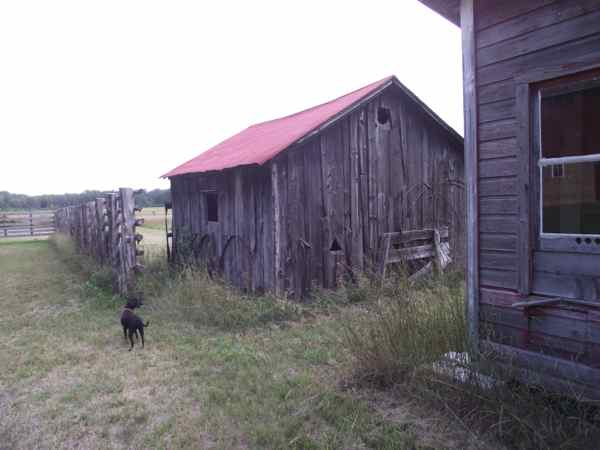 This building used to be closer to the Wisconsin river. It belonged to a blacksmith who would fix stuff on the boats as they made their way long the river. The building on the right is a coop. 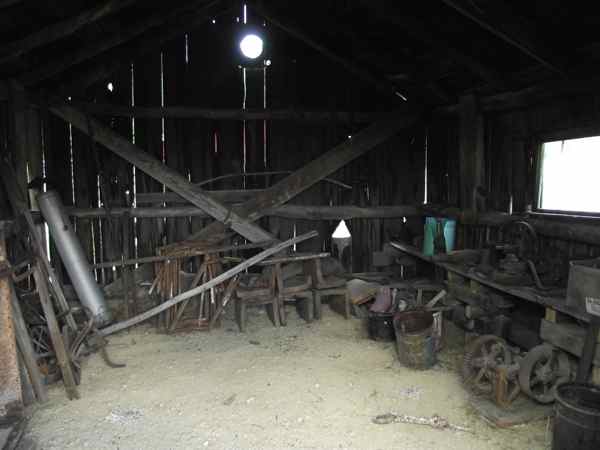 Inside the smith building. Cool factoid: The towns up and down the Wisconsin river are separated by about a day’s travel by boat. See the round holes in the boards? When they floated the boards downriver, they just sort of lashed them all together and made a raft out of them. They would drill holes through the boards to lash them together. All the old planks you see in the buildings have perfect round holes in them.

a few barns and an outhouse. 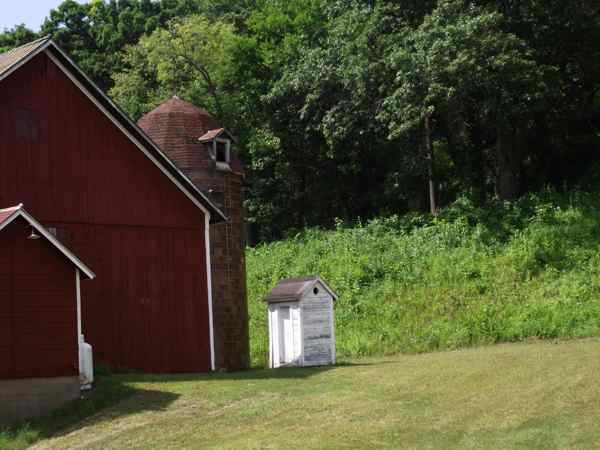 The outhouse is a two-seater and has a flap on the back for easy cleaning (I suppose it’s for easy cleaning. I hope it wasn’t to remove chamber pot type things or prank whomever was using it).

The one guy is a master roofer. My cousin’s architect friend was just in awe of this roof. 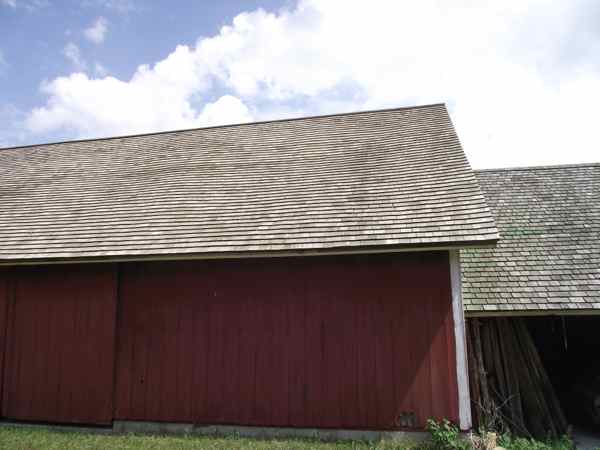 I asked him why, he said a whole bunch of stuff about how neat and clean and wonderful it was and then just, in a sort of flabbergasted way, said, “NOBODY does work like THAT anymore!” 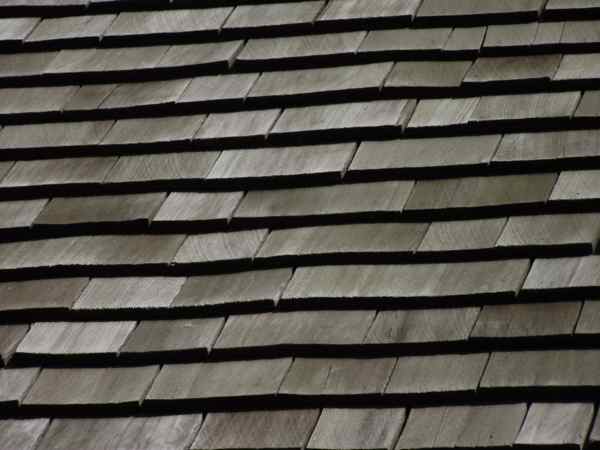 I guess it was nice.

In their own house, they took the oldest part of the house from like the 1840s or something and enclosed it in the modern structure. So basically, they have this old shack that’s a room in their house with rustic walls and floors and square nails and wow, is it ever cool.

On my walks around the area, I’ve seen sandhill cranes noshing on worms in a field (Note: it seems I will never see the cranes if I have my good camera with me), lots of cows (Lagniappe LOVES the cows. A herding instinct perhaps?) and some coyote poop. I haven’t seen the coyotes and I’m not sure I want to. I’m afraid they might look at Lagniappe like she’s a tasty snack. I’ve heard the coyotes and they sound awesome. Completely different from wolves; a higher pitch and not as lamenting.

The flowers here are really beautiful. I’m a pretty awful photographer, but here’s a bunch of pictures I took on my walks with Lagniappe. Some are native species, some aren’t, all look pretty amazing. 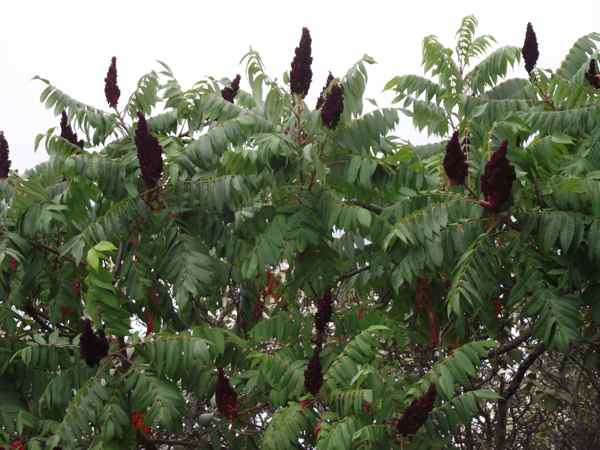 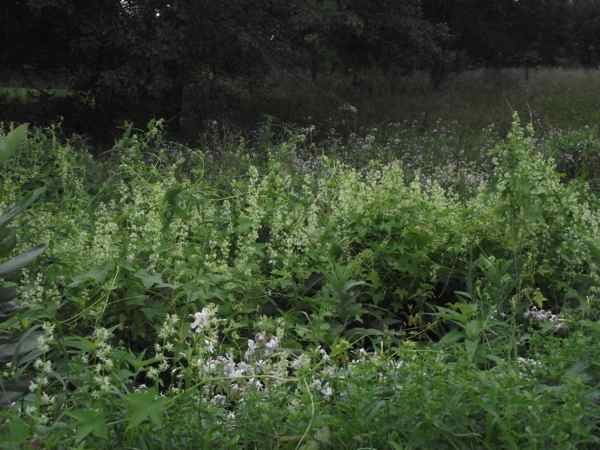 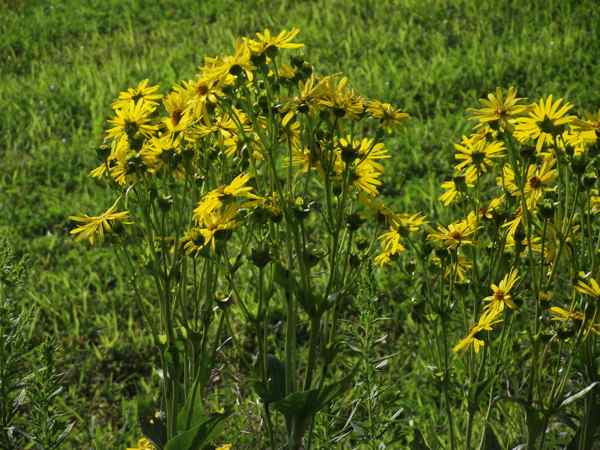 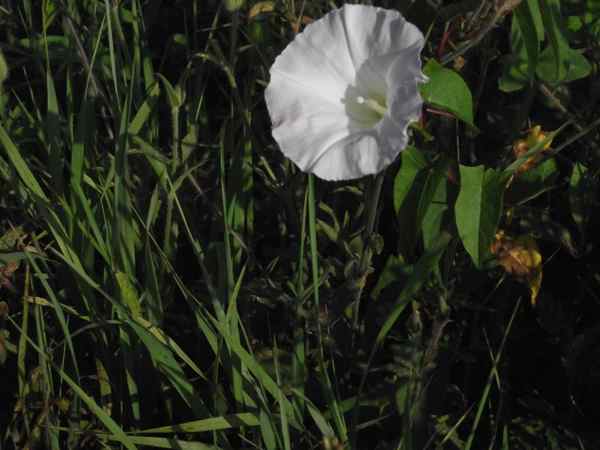 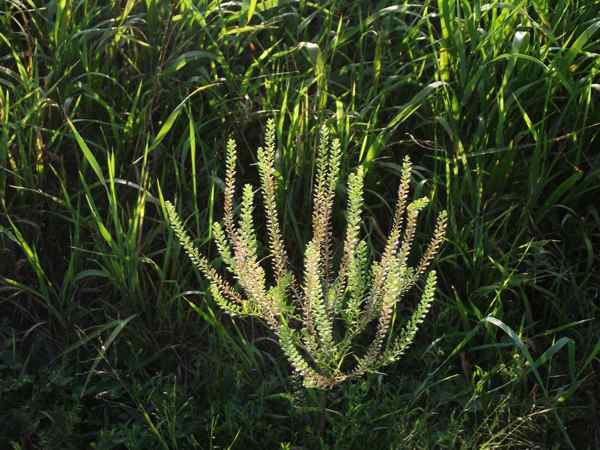 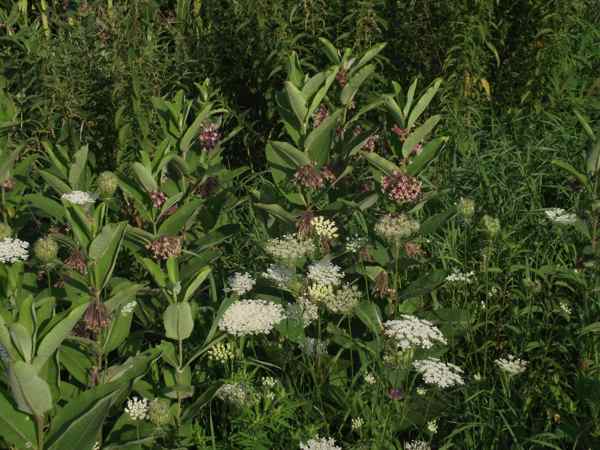 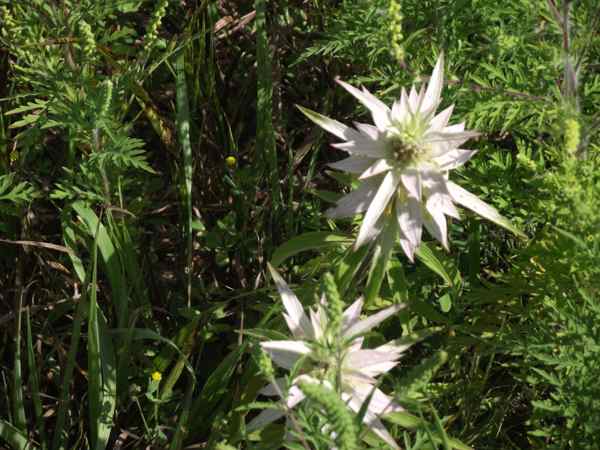 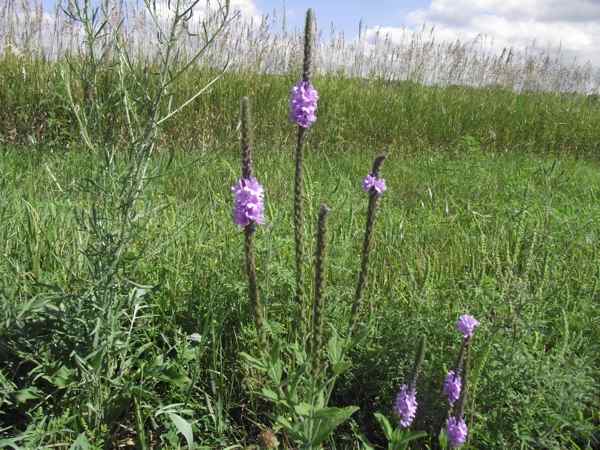 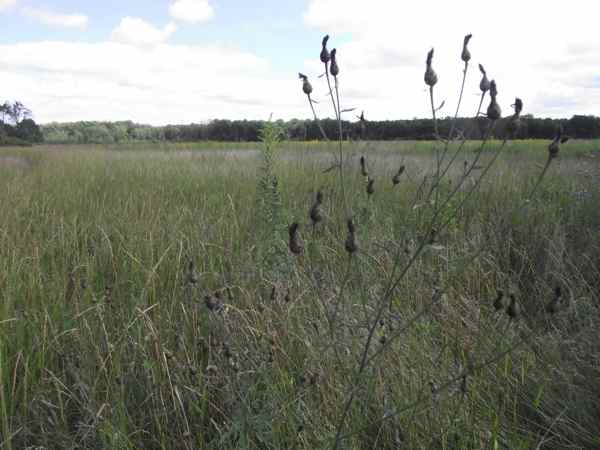 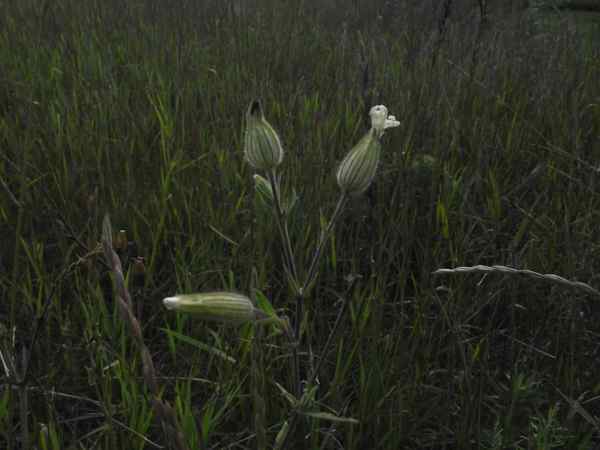 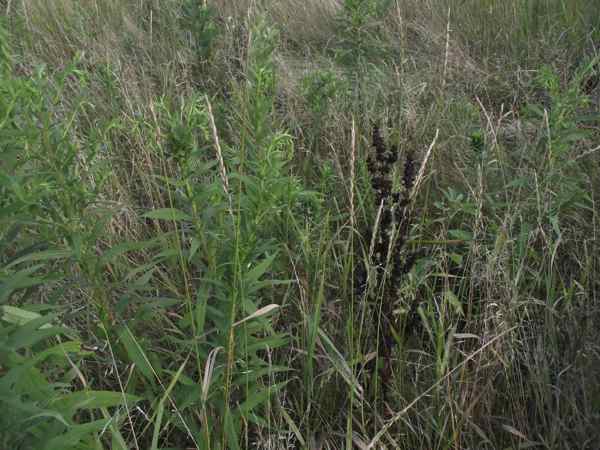 This past Saturday, I woke up early and volunteered to do some work weeding a bit of prairie for the Sauk Prairie Conservation Alliance, which is a group my cousin has been working with forever. (In fact, back when bells and whistles weren’t commonplace with HTML, I set up their first website.) It was cool to actually meet some of the people and actually go into the prairie. Though, I must say, the idea of the prairie is far less buggy and prickly than the reality. After a few hours of lopping off “woody” things and pulling burdock, avoiding wild parsnips and poison ivy, I was exhausted and itchy. But, at least I saw what it was all about. (There is a major controversy going on with that block of land. If you’re interested in conservation issues, visit the website above for more information.)

Also, since I’m now a resident of Wisconsin, I am reading “A Sand County Almanac” by Aldo Leopold. He’s the godfather of conservation thought and boy is it a lovely book. I don’t think he wrote much before he wrote it, but what great writer he turned out to be.

After reading all of this, you’d probably be safe thinking that I’ve found my whole zen center here. That I’m rejoicing in nature, learning about my new home, and chilling with my cousin.

THIS is when you should cue the Amityville Horror music.

Last night I was alone here, my cousin had some PBS gig in the twin cities area and so I stayed here. I thought, “Cool; drink some wine, watch some Netflix, go to bed.” If only…

For the past few days, I’d been noticing this bug (I thought it was singular) sitting on the wall under the window near where I’ve parked my computer. Trying to be all “nature” and stuff, I decided to live and let live. Sometimes it was there, sometimes it wasn’t. It didn’t look like much to me; sort of a fat black ant or beetle thing.  Finally though, I was doing some work and the sight of the bug started to, well, bug me. So, I smushed it. It made a nice cracking noise and I tossed it into the bin. About an hour later, there was another one. Hmmm, that’s odd. Smush, crack, toss. And then a little while later, another.

You can see where this is going.

By the time I started to freak out at about 10pm, I must’ve killed a dozen of them. They just kept on coming. Meanwhile, and I’m not making this up, my dog starts to bark at a blank wall that is adjacent to the civil war era house. There’s no door or window there, but the wall is directly against the older house (I assume it will be opened up with the renovation on the old space is completed.) She’s quietly barking and growling and her hackles are raised. She doesn’t normally do that. So now I’m thinking, at best, ghosts, and at worst? Demons.

Keep in mind, I’m alone in a strange house in the middle of nowhere. If I screamed, NOBODY would hear me. Just like in the movies.

So, I’m killing the black bugs that are beginning to look like wood ticks or bed bugs to me, the dog is growling at a blank wall and it’s at that moment, I stupidly look up to see that the ceiling is covered with these black bugs. Well, OK, not covered per se, but definitely there was a lot more of them and they seemed to be coming out of a drywall seam in the ceiling.

I grabbed the dog and my computer and high-tailed it to another room on the other side of the house. I did a sweep of the rooms closest to the bug room and found that a few of them had made a break for it and where expanding their horizons. I killed another five or six that I could see. I closed the door and that was it for the night. I had a terrible case of the huzz.

So at that point, I’ve sequestered myself in another room with a pull-out couch. I’ve made the bed, tried to calm myself down and then guess what happens. The coyotes start to howl; very loudly and very close. The dog is barking and howling and bouncing around like a maniac, I think I can hear the coyotes on the grass outside the window and now I’m thinking, “Great, the demon has summoned the coyotes. I’m screwed.”

Ok, so I have a vivid imagination.

Fortunately, the howling eventually stopped and Lagniappe calmed down. I watched some stupid, mindless thing on the computer and tried to fall asleep. Took a while though. I was thoroughly freaked. Thank god I had her here with me though. While not a calming creature, at least I had someone to freak out with.

Maybe I’m not cut out for the wilderness. I think it’s pretty and all, but actually being IN it? I dunno. I’m too much of a pyscho. I don’t know how to calm myself down and be cool. I’m such a dork. And a bugphobe. Lord am I ever a bugphobe. I’m sure my cousin’s lingering memory of my visit with him will be just how much I complained about the bugs.

Too bad, because it’s really pretty here right now, what with all the flowers and all.

UPDATE: Turns out they were just beetles. According to Curt, “There must’ve been a hatching.”

Now THAT sounds like the perfect name for a horror film. “THE HATCHING” Starring Terry Hatcher.  A lonely woman on an Wisconsin farm slowly loses her mind when bugs start pouring out of the walls.