We got to the bus station in San Cris during a torrential downpour. We had to walk down Insurgentes and the farther down we got, the deeper the water got. It had been raining all day. Seriously. It barely stopped. And apparently, the drainage in the city can’t handle it. 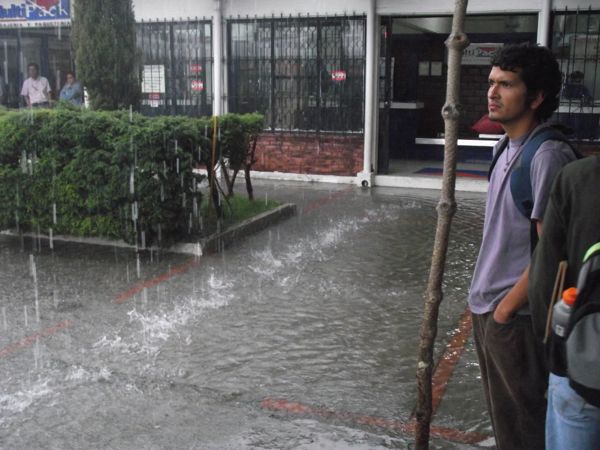 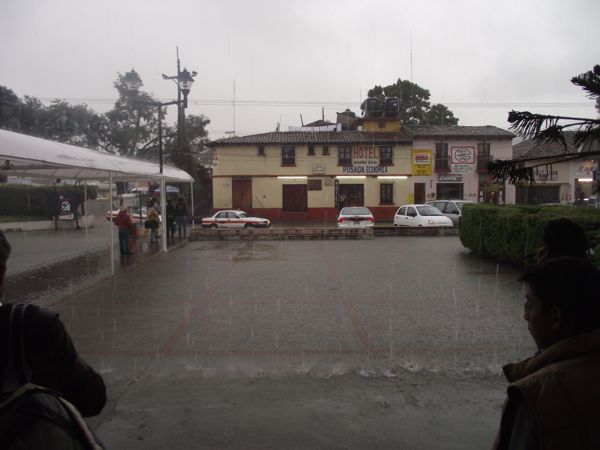 There I was, dragging my bag through about 8 inches of water. I tried to lift it, but I couldn’t. Huppy had to grab it from me at one point or it would’ve floated away. By the time we got to the station, I was wet up to my knees and so was he. It was epic.

Now, here’s something you probably don’t know about me… or maybe you do. But, I freak out pretty easily, especially when we’re traveling. I actually hate to travel. I love love love going places, but I can’t stand the actual process. Something about it, well, EVERYthing about it. The carrying, the packing the security, the discomfort, the questionable bathroom situations. It’s all bad. The only good thing is when you’re done, well, there you are, someplace interesting (if you’re lucky). And what is absolutely ritual about my freak out is the day or two leading up to a big trip, I practically lose my marbles. I’m yelling and overreacting and yelling and you get the picture. Now, Huppy and I have been traveling together for six years and each time I have a meltdown at some point in the process. And after six years, you’d think he’d be all “oh, there she goes” but no. STILL, he’s like “Calm down! What is wrong with you?!” and I have to say, “After all these years, you STILL don’t know I freak out? Seriously? Humor me for chrissakes.” We’ve had the same conversation in just about every airport and bus station we’ve ever been in.

Anyway, this particular meltdown, surprisingly, wasn’t about being wet. It was about the fact that we were supposed to be boarding our bus and Huppy didn’t seem too worried that we weren’t boarding. I was watching people go through the door and get on SOME bus, was it our bus? I had no idea because Huppy had the tickets and Huppy decided that at that very moment, he was going to check out the hotdogs. So I’m standing there, wet, with all our bags, wondering if we were supposed to be getting on that particular bus and he’s aaalllll the way on the other side of the bus station checking out hotdogs.

Just to give you some incite into what it’s like to travel with me. Not altogether pleasant.

Anyway, we got on our bus, finally (and no, he didn’t buy a hotdog, but not because they’re the worst things on the planet to eat, but because they didn’t have them on a grill. They nuked them.)

Also, I thought the pills I had brought would help us sleep. They did not. What they did do is get us just high enough to not care that we weren’t sleeping. Oh, did I mention one of the kids barfed right next to my seat? Oh, I forgot to mention that? Oh.

ALL OVER THE FLOOR AT MY FEET.

Though, in the future, we are not going to take a bus again like that. I don’t care how much more it costs to fly.

As tired as I was and as hot as it was, I did not find Mérida all that interesting. We got a hotel pretty easily. We first went to the one that was recommended by Lonely Planet, but it seemed expensive and sure enough, there was a much cheaper one just a block away. Everybody who travels calls it the Lonely Planet Effect. The minute anyone gets mentioned in that book, they bump up their prices. The place Huppy found seemed clean… until we went to bed that night and heard this sharp “swoosh swoosh” sound and looked down and there was a cucaracha the size of Huppy’s foot… and he wears a size 12! Of course, I was the one who had to kill it. Something about his family, none of them are very comfortable around the cucarachas.

Oh, about his feet. The funniest thing happened. We were looking for shoes for him because stuff is so cheap here and we found a great pair that he would’ve liked a lot and they were about $40 USD less than what he’d pay in the States. So he walked up to the two little sales girls, and by little, I mean neither one of them was over 5”1′, and he said in Spanish, “Do you have these in a US size 12?” They both, literally gasped like someone had just run over a puppy or something. It was bizarre. “No,” they said shaking their heads, their eyes as big as saucers, “No, señor. Those would be a special order.” I’m sure they went home that night and talked about the crazy gringo with monstrous feet.So, back to Mérida. It’s a town in the Yucatan is all. 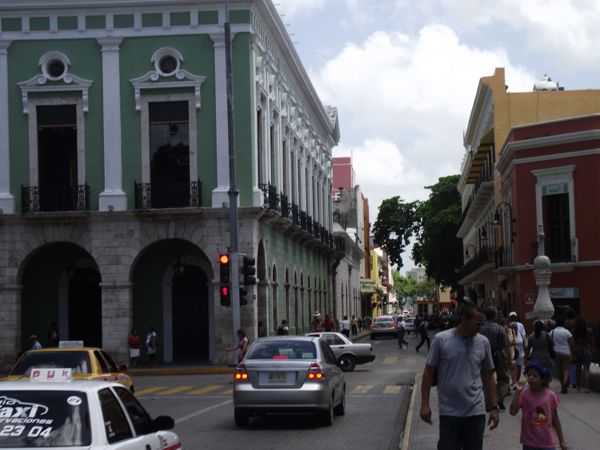 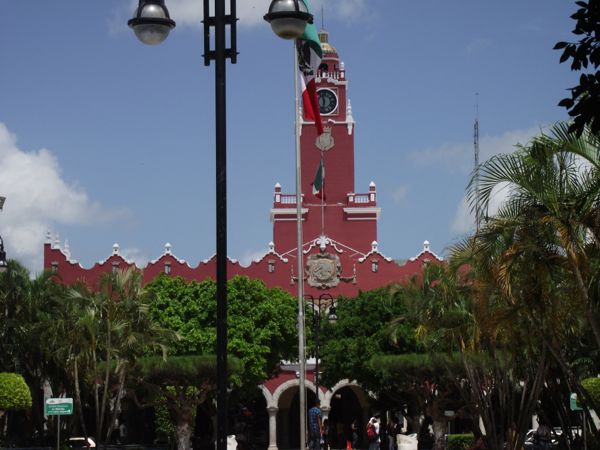 The buildings were meh, the food was meh, there weren’t any bars to speak of, (But there was a bar outside, right in the middle of the street) 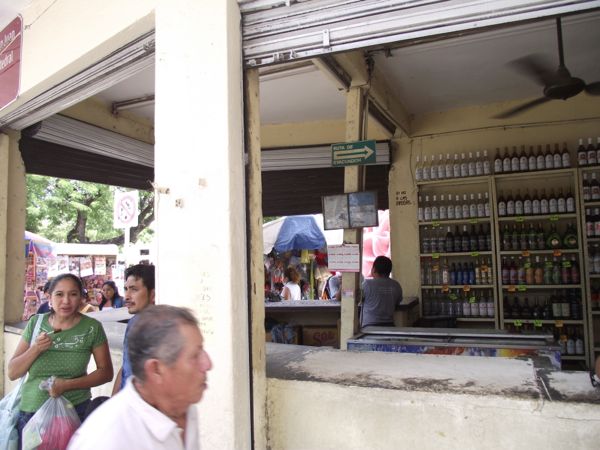 and the mercado was just a mercado. 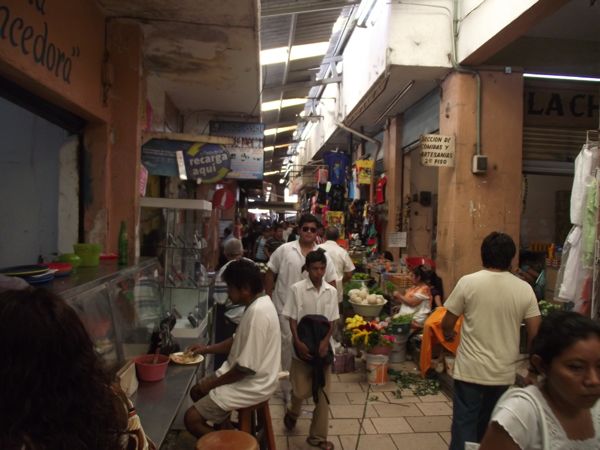 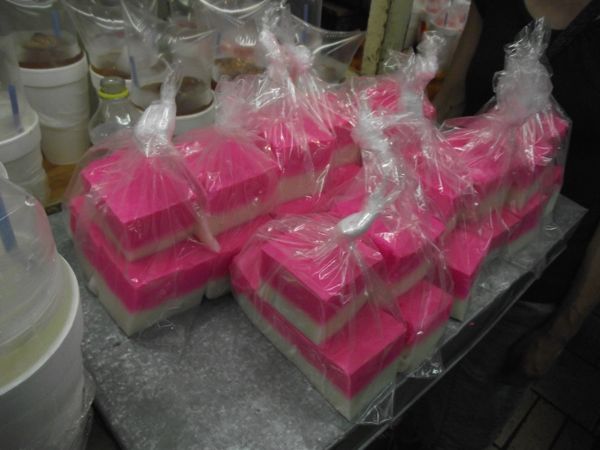 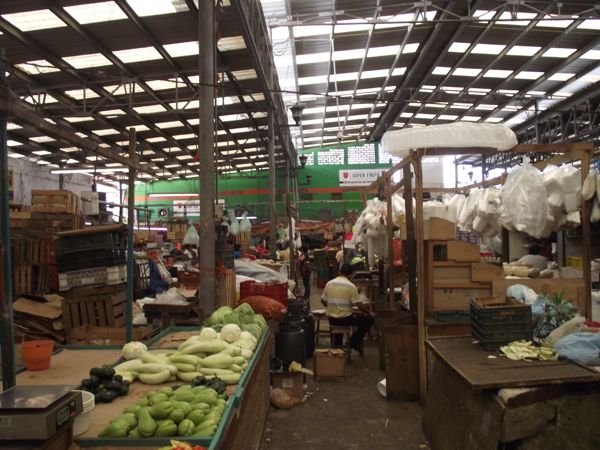 Though supposedly they do a lovely deep fried pork belly thing, but oddly, Huppy didn’t get into it. We sort of walked around a bit and complained about the heat a lot, well, I complained about the heat a lot, so we decided to go to the beach. It was an easy trip, about a buck a piece each way and buses left every 10 minutes. It only took about 45 minutes to an hour to get there. 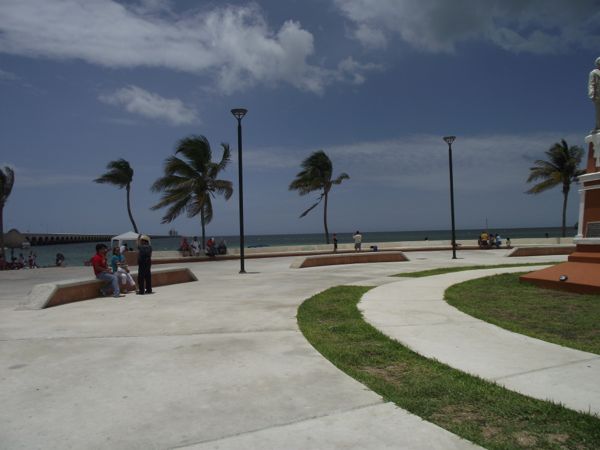 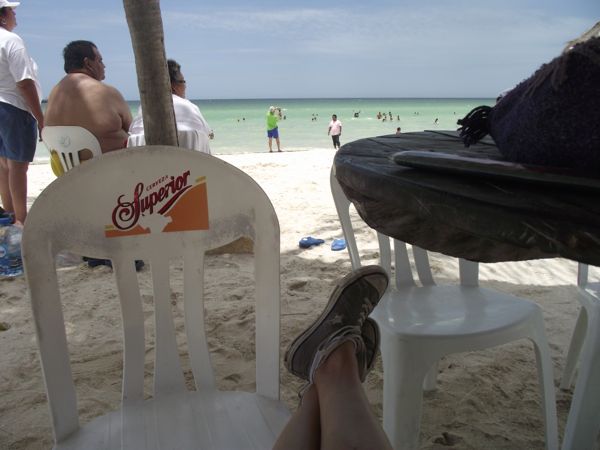 Those are my feet! Up! On a chair! I’m relaxing!

Once there, we did the most incredibly normal thing we ever done on one of our trips. We ordered drinks and drank them on the beach. 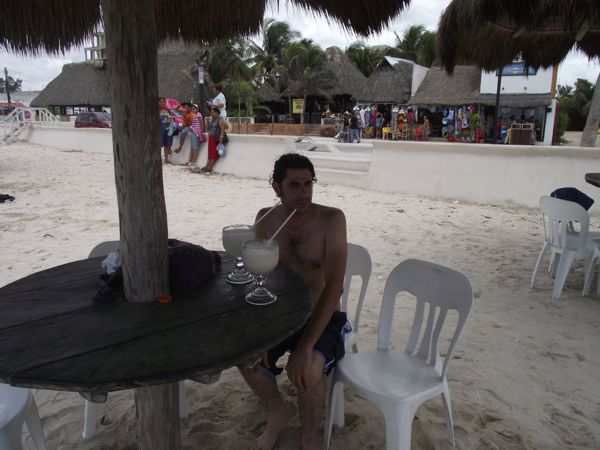 I got a piña colada and he got a margarita. We watched the families swim and play and it was the Gulf of Mexico and the town’s name was Progresso, which is funny because the water was so warm, it felt like soup. 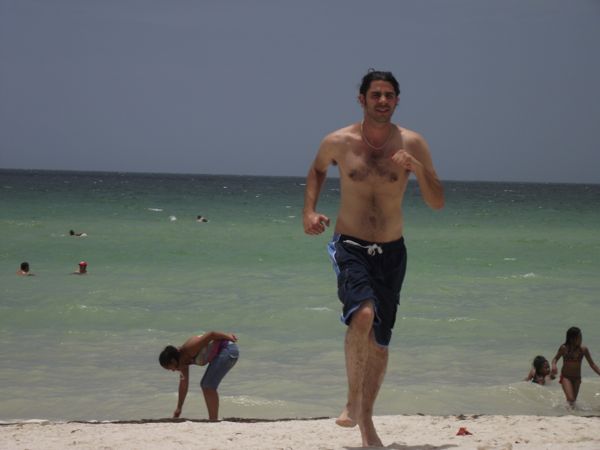 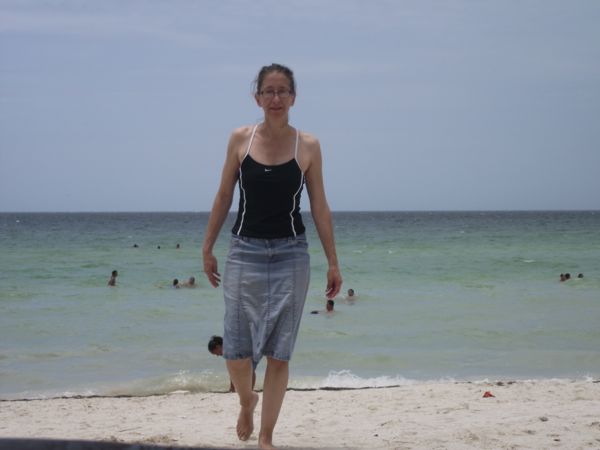 The drinks were a little overpriced, but it was pretty much just Mexican tourists, it was much cooler there and so, we were pleased. Well, Huppy was pleased. I was exhausted.

We decided to eat a large lunch/dinner there at this place that was so packed, we just had to go there. I mean, it couldn’t be bad if there was a line to get in, right? Actually, this was one of those times that sort of logic worked. The food was fantastic. We ordered a conch cocktail and with it, they brought out all this lagniappe. 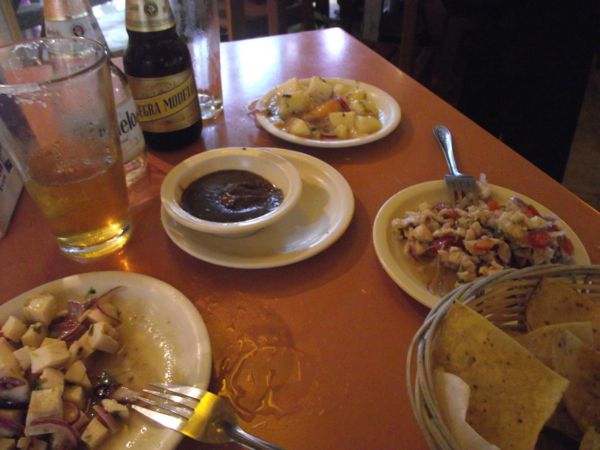 They brought a calamari salad, a potato salad and a mozzarella, basil and onion salad, along with some chips and black bean dip! Pedro would’ve initially scoffed at the prices, but he would’ve been impressed with the lagnaippe. Also, the main course, and we both got a garlic sauteed filet of fish, came with a ton of rice, a ton of garlic and a ton of veggies. Desert was a Mexican Flan, which, according to Huppy is VERY different from a Cuban flan. To me, it’s just browner and less creamy, but still pretty good. 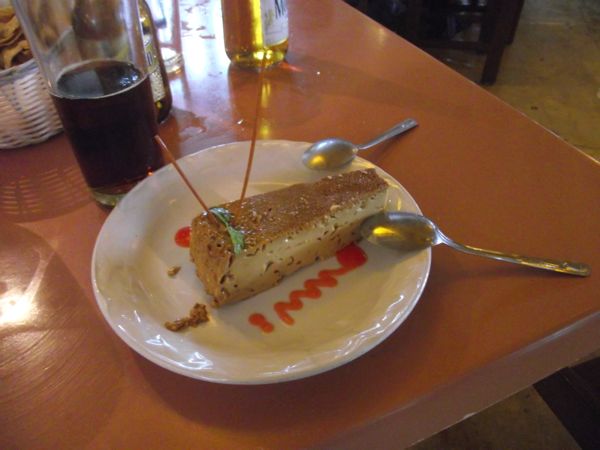 It was truly a wonderful meal that overlooked the Gulf of Mexico and we were surrounded by Mexican tourists, no American tourists at all. How delightful is that?

Then, on the way back, Huppy thought it would be a hoot to go into a cantina. I did not think it was so much of a hoot. Cantinas are typically well-lit and full of cheap beer and locals. It’s very working class. This one was very loud and very crowded and what few women were there, I suspect, were prostitutes more than anything else. I mean, they’d have to be because some of the guys they were being nice to were the kind of guys who HAVE to pay for it, you know? I was not feeling particularly adventurous. I was a wet noodle actually. Keep in mind, we hadn’t slept since the morning before, had been on a 14 hour bus trip, some kid had barfed next to me and it was hot as Haddes. I was having murderous thoughts.

I finally got him out of there and we headed back to ‘the city’ where I showered and got dressed and then… we went out for drinks, because traveling with Huppy means going out for drinks in any new city we happen to be in. I was becoming insane with exhaustion and his much younger self just looked at me like “What? What’s the problem?”

We didn’t get back to the hotel room until almost midnight where I promptly, and not so courteously, passed out. The next day, we decided just to go straight to Cancun. We had considered going to Chichen Itza, but it was too complicated with all of our luggage. He owes me one though because Chichen Itza is on my bucket list.

And let me just say, Cancun was the perfect place to end our trip.