It is somehow fitting that we ended our trip in Cancun. It was like a slap in the face. And here’s why:

What ever Cancun was before the American corporations came, its not that anymore. It may have a been a beautiful place with lots of indigenous people, it might’ve been run down and undeveloped, it might’ve been a lot of things, but what it is now is an over developed area that is completely lacking in any cultural interest… which is just how ‘mericans like it.

You can walk out your door, get into your car, drive to the airport near your home, get on a plane, land in Cancun, take a cab or a shuttle to your hotel and not have to change your routine one iota. And look! They made the route to your hotel all clean. No nasty roadside stands. No small half dressed children playing in dirt. No stray dogs scrounging for food. You can go running in a park, just like home. You can have your dog with you, just like home. You can go to an Outback or a Bubba Gump’s or a Hooters, just like home. Want some Baskin Robbins Ice Cream? No problem. Have an oolie for Chilis (which I find incomprehensible) go right ahead. Coke? Check. Rules? Check. Brown people to wait on you? Double check. Yes, anything you can do at home, you can do and have in Cancun. No worries. You won’t have to rub elbows with those non-English speaking Mexicans. The indigenous? Not even seen. Extreme poverty? Outta’ sight, literally. Sketchy cantinas and street food that smells so good, you’re tempted to eat it? Nope, not a one. It’s safe, well-policed, flashy and expensive. Just like ‘mericans like it.

Don’t get me wrong. The beach is lovely and how dare the Mexicans or the indigenous even dane to think they shouldn’t share that with the world,… at an exorbitant price… oh, and after the American corporations come in and make all clean and nice and shiny? You Mexican and indigenous folks? You can’t come in unless you work here. We don’t want your kind here. You would just put the ‘mericans off. Make them uncomfortable, maybe too conscious of their own position in this world. Maybe they might realize that you’re no different than they are. And if they realized that, how many injustices to others might they not stand for? No, can’t have that. We have to maintain the illusion that ‘mericans are somehow better than anyone else. They need to feel superior. That way the system is maintained. The system will survive. And that’s just how ‘mericans like it.

Enough with the rant. You get the picture.

We stayed in a hostel that was pretty cheap. It was $450 pesos/night for a private room with A/C and a our own shower. Compare that with the average hotel stay on the ‘strip’ and it’s amazing. Not only that, because we look like ‘mericans, we were able to go to the ‘strip’ and go to the beach and nobody said anything to us. Actually, it was pretty easy because we didn’t have to walk through a hotel to get to the beach. I suspect though, that if that had been the case, had all beach access been through hotels only, we still could’ve gone to the beach, but your typical Mexican would have a difficult time of it. I guess, according to the Mexican government ALL tourists can use the beach. It’s just difficult if the only access to the beach is through a hotel.

The hostel was clean and close to the bus station, which was a plus since we had to take a bus to the airport the next day. Everyone spoke English. Also, we found a really bad restaurant that was basically a caricature of a Mexican restaurant. The food was mediocre, the band was mediocre and lots of tables were doing group shots of tequila, with the waiters and waitresses performing for the patrons by carrying the shots on their heads or putting a big sombrero on somebody’s noggin and making a big production of downing the liquor. They must’ve hated us because we told them “No photos. No sombreros. No production. Just bring us our booze and leave us alone.” 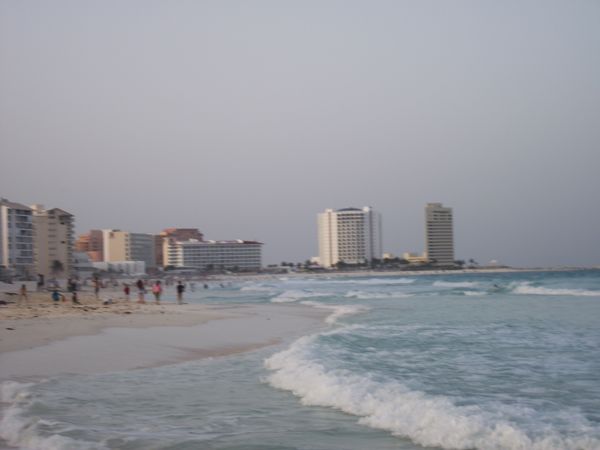 Not a great shot, but you see, lots of hotels, beach and pretty blue water. What do these hotels look like: 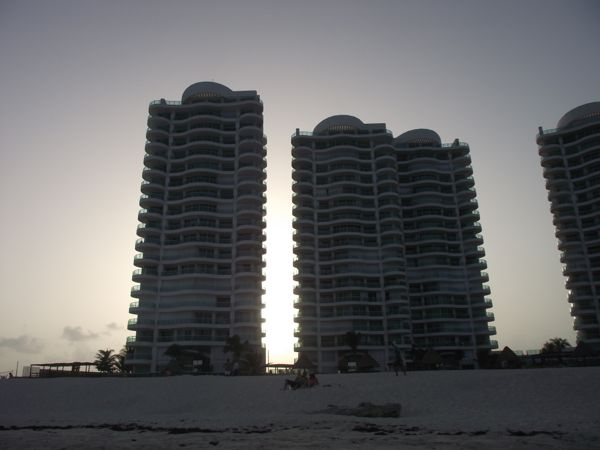 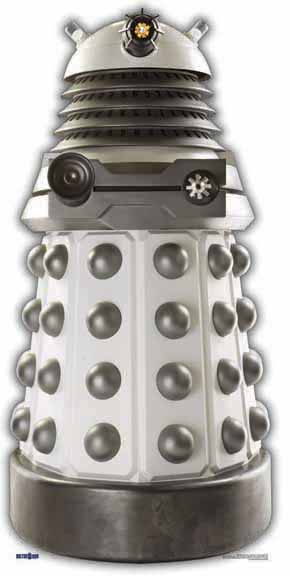 Anyway, it was really pretty and I can see why it’s such a vacation spot. Being there FEELS like a vacation. 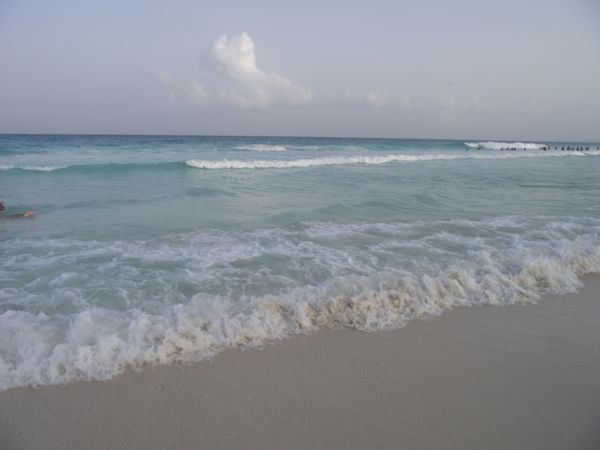 You can even party on a large bed by the water. 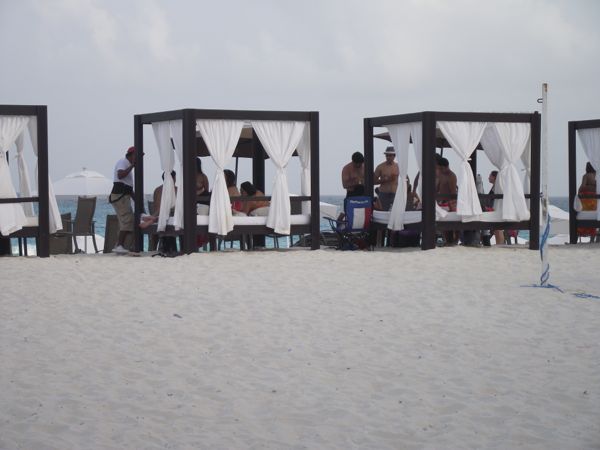 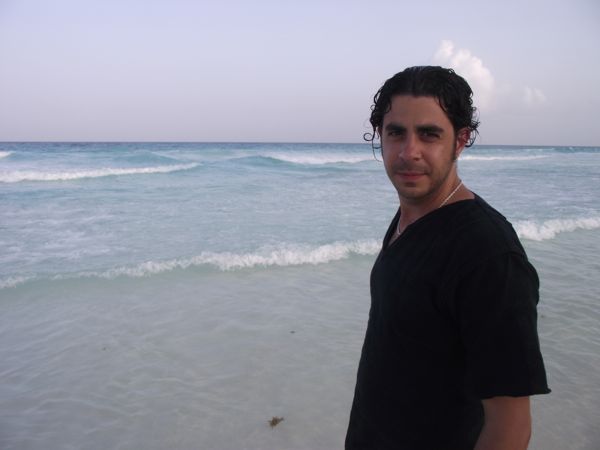 For some reason, the camera doesn’t capture just how blue the damn water was. 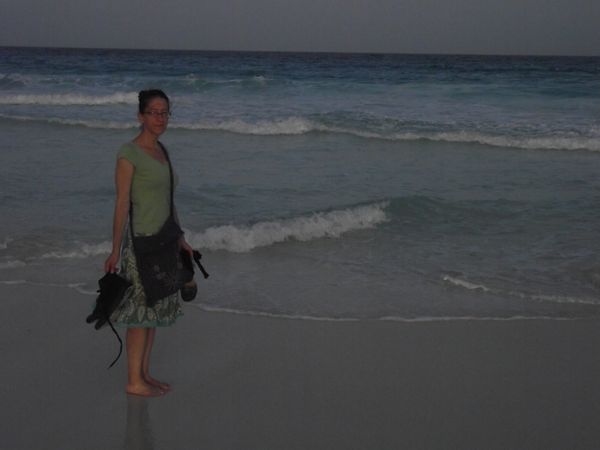 The strip was just hideous. 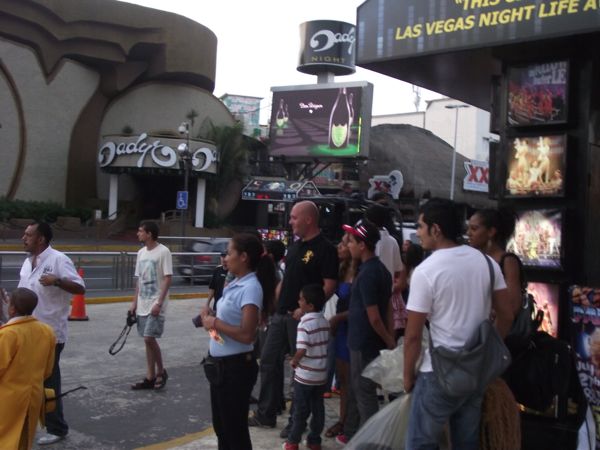 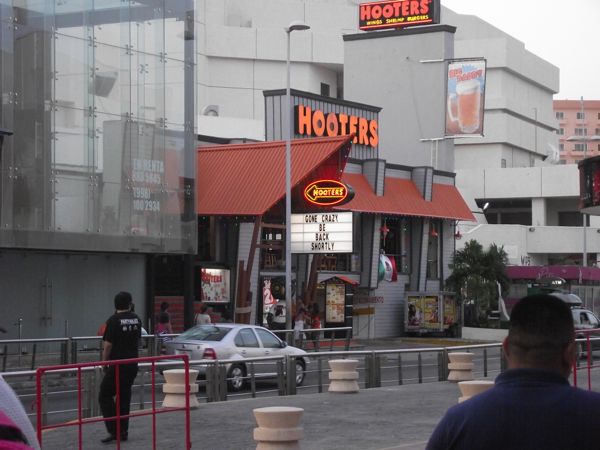 Good God Almighty. It was an ocular nightmare. Not only that, when we came off the beach, there was a bathroom/shower area there so you can wash the sand off but they charged 15 pesos! I mean, c’mon.

The trip back to the States was typical. The flight out of Cancun was civilized. No having to remove my shoes. No opting out with the undignified pat-down. But sure enough, once we got to our gate, there were two girls, hired at the behest of the US TSA to give us an extra poke and a prod. OH, and Huppy had four big S’s next to his name on all his boarding passes. SSSS they said. Which I assumed meant “Super Super Super Search.” It actually means “Secondary Security Screening Selection” and it’s theoretically random and is triggered by odd travel stuff, like flying too much or booking a big flight, one way on short notice, which is what we did. Huppy did not make the girl very comfortable during his super duper secondary screening. He looked around when she felt his butt, made a face when she ran her hand along his inseam and then, when it came time to take of his shoes, he made sure he handed her his stinky converse tennis shoe with its toxic gaping maw pointed right at her face. Poor thing.

And then, our descent into the land of rules and regulations began. THE MINUTE we landed in Atlanta, someone came over the loud speaker to give very clear and concise instructions on what to do (go through passport control, pick up your checked luggage, go through customs, redeposit your checked luggage and go through security) to what not to do (no phone calls or text messaging, no photos or recording of any type, stand behind the red line, wait your turn). We got through passport control fine, but when it came to going back through security, they wanted me to walk through the x-ray machine and I of course opted out. The pat down was more annoying than usual. Though, from now on, I think it’s my duty to learn all of the words to “God Bless America” (with special emphasis placed on “land of the free!”) so that next time, when I’m standing there with my arms outstretched and my legs hip length apart, I can belt out that tune a la Kate Smith. Really let it rip. Well, that’s the plan anyway. I think it’s our duty, as ‘mericans, to remind everybody within earshot of TSA what it is we’re supposed to be so goddamned proud of.

After that horrendous experience, I became obsessed with images of control. All the signs that are everywhere there’s something that moves. 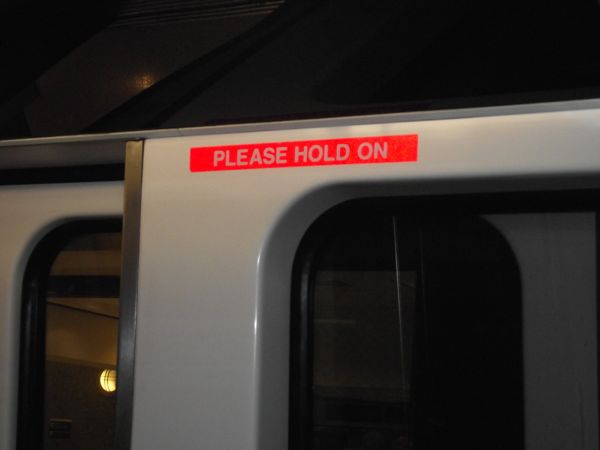 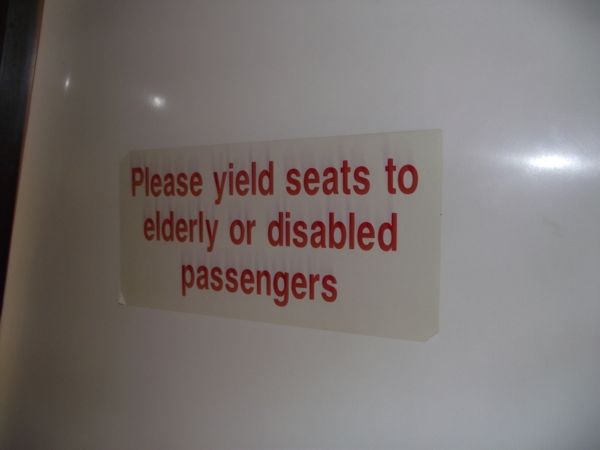 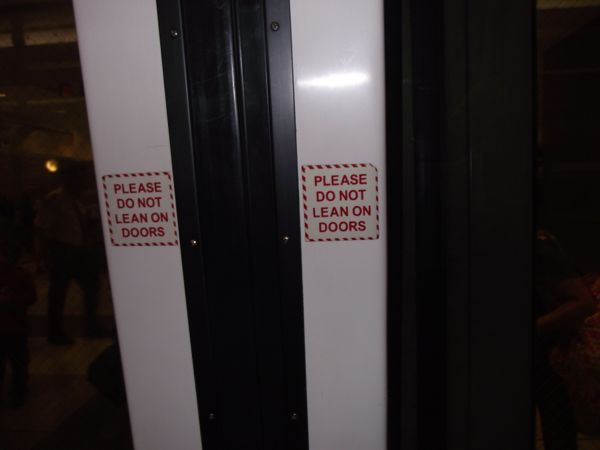 If a door can open, “Stand clear of the door.” If you’re on a tram, “Hold on” and “Don’t Lean on the Door” and “These seats are for the elderly or disabled.” 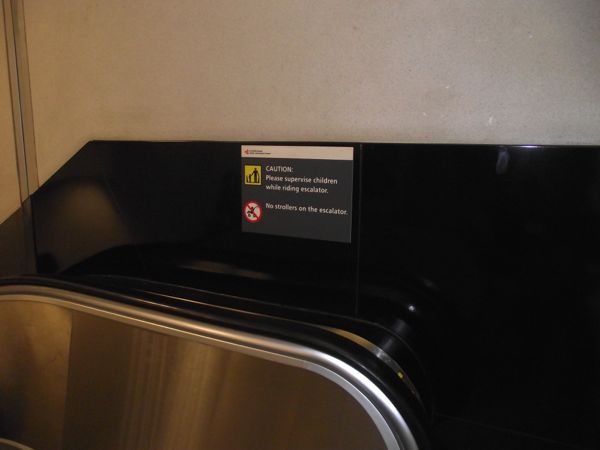 Riding on an escalator: “Hold on to the rail” I mean, it was endless and everywhere I looked. 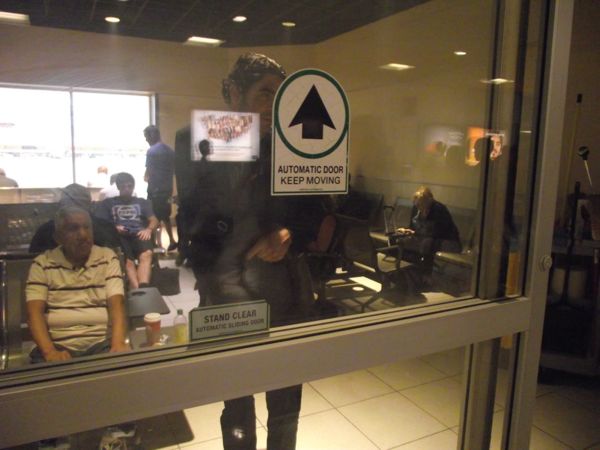 Frankly, I half expected the voice on the tram to say “The doors are closing. Please hold on while the train is in motion. If you fall and you weren’t holding on like we told you to, we can not be held legally liable and no lawsuit will be settled if brought against us.” We started to wonder what kind of things would they start putting signs on if they could? “Don’t walk on the floor.” “Stay off the carpet.” “Please walk in a straight line.” “Don’t laugh too loudly.” “Don’t excrete any fear pheromones. You may set off the detectors.”

The possibilities are endless.

Now that our trip to Mexico is officially over (though the blog will be maintained for a while longer, I mean, c’mon. We’ll be New Orleans.) I was sad to leave. It was nice not being accosted by the police every five minutes. It was nice to not see signs like “trash goes here” or “watch for oncoming traffic.” It was REALLY nice not being hot. Not once. Not even a little. It was nice to see so many people enjoying life, out and about, every evening, just walking and talking, eating a snack and hanging out. It was really nice getting lagniappe with every meal or drink. It was wonderful not paying a fortune for things that are necessary, like milk, eggs and vegetables. I mean, there were things about that weren’t great. The kids that came after you to buy their trinkets and then they looked at you with their little doe eyes and waited for you to cave and either give them some money or some food off your table. Some of the worst poverty I’ve ever seen. But overall, Mexicans just seem, well, happier. They seem to enjoy life a bit more. They seem to laugh a bit more. They seem to relax more. It creates a pretty damn nice vibe.

Yup. Sad to go. Wanna go back and never return.