The best t-shirt ever: 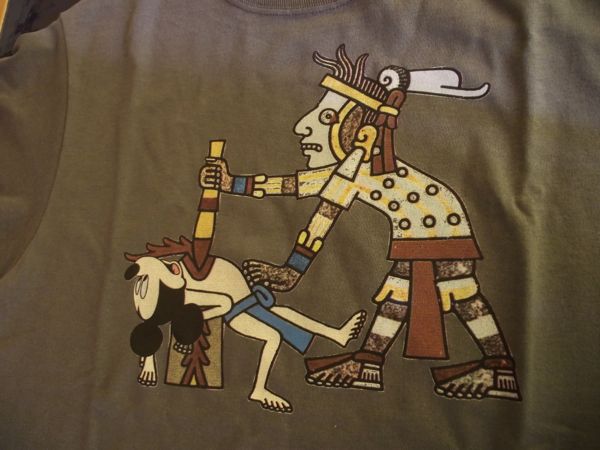 If you want one, you gotta’ let us know.

There are a lot of them here, but unlike in South America, these all seem friendly and cute, albeit dirty.

END_OF_DOCUMENT_TOKEN_TO_BE_REPLACED

But I just have to say that as I was cleaning the shrimp, I looked out the window and saw these three young guys walk by. They were all wearing white short-sleeved shirts and black ties. I thought to myself “Huh. They look like they should be on Broadway in the ‘Book of Mormon’ or something.

Sure enough, a few minutes later, they knock on my door. I feigned ignorance of Spanish, which really isn’t much of a feign. Anyway, I said, “Me habla no Span, er, español.” It was as wrong as I could get it. Sadly, one of the guys said “Oh, you speak English! We’re missionaries! I’m from Missouri! Where are you from?!”  (Everything they said was punctuated with a nice, clean exclamation point. I’m not kidding.)

What are the odds?

They asked me if I knew about the book of Mormon. I just stood there with shrimp poop covering my hands and thought, “Seriously? Did that boy just say that out loud?”

I didn’t know what I could do to get rid of them. At first, I thought I should say “Sorry. I’m a Wiccan.” But I don’t have any visible tattoos or piercings so I doubt I could work the Wiccan thing. Then I thought “Sorry, I’m a polytheist.” But that just sounded retarded. I mean, nobody’s a real polytheist anymore.  So I decided on, “Sure. I know a few mormons. Excommunicated ones, but, you know.” Which actually isn’t a lie.

They waved and said, “Have a nice day!”

The sun was out. I’ll post more about it another time, but this made me laugh.