Honestly, not what you think. (And if you really know me, you’re thinking some pretty wild stuff.)

These are dry, little monkey balls: 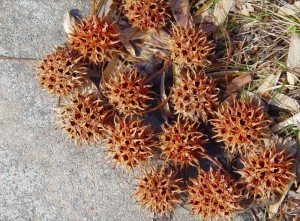 the leftover woody seed pod of the American Sweetgum (Liquidambar styraciflua) tree. The spikey compound fruit is composed of numerous capsules; each filled with a couple seeds. After the fruit opens and the seeds are released you’re left with this dry little “monkey ball”.

The problem is that apparently, my neighborhood has about, oh, I dunno, a bazillion American Sweetgum trees and they all vomit these ping-pong-ball-sized, rock-hard seed pods, en masse, starting in February. The end result being the lawns and sidewalks are just covered with the things until sometime in the Spring when the property owners feel like the trees are nearly done spewing and they can then pay someone to cart them away. (Heaven forbid they should stay on top of the problem like they do with the snow. The minute snow shows up, they toss out enough salt to preserve a large whale carcass.)

Maybe you’re thinking, “Well that’s not such a big deal” and you know what? You’d be wrong.

Every February since we moved here, I have managed to twist my ankle pretty badly on the damn things. Not bad enough to get any sympathy from anybody, but enough that I’m thoroughly annoyed at having to walk the dog. This February is no different. This morning, Lagniappe thought it would be wonderful to chase a squirrel on the front lawn so I thought it would be wonderful to accommodate her. BAD idea: Step, Step, Twist, Ouch. Damn!

And let me tell you, being “old enough to know better” does not mean you’re smart enough to rush home and put ice on your ankle after you twist it. I stupidly sat at my desk for hours, trying to teach myself a few simple tricks using jquery and when I got up, I nearly toppled over. It’s not Quito bad, but it’s bad.

Ugh, yet ANOTHER thing I have to discuss with the über-maker when it comes to this stupid physical body he gave me. “Dude! Seriously? THESE ankles? Not worth crap. Really. Why, for the love of You, WHY?”